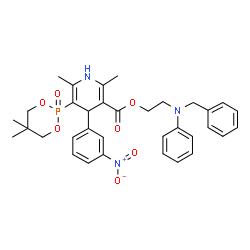 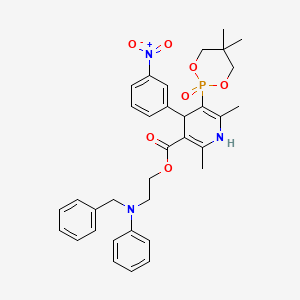 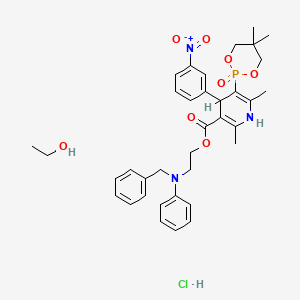 Launched – 1994, Shionogi Zeria
Efonidipine (INN) is a dihydropyridine calcium channel blocker marketed by Shionogi & Co. of Japan. It was launched in 1995, under the brand name Landel. The drug blocks both T-type and L-type calcium channels [A7844, A32001]. It has also been studied in atherosclerosis and acute renal failure [A32001]. This drug is also known as NZ-105, and several studies have been done on its pharmacokinetics in animals [L1456].

Efonidipine (INN) is a dihydropyridine calcium channel blocker marketed by Shionogi & Co. of Japan. It was launched in 1995, under the brand name Landel (ランデル). The drug blocks both T-type and L-type calcium channels.[1] Drug Controller General of India (DCGI) granted approval to M/s. Zuventus pharma Ltd for marketing efonidipine under brand name Efnocar in India .[2]

Efonidipine is a dual Calcium Channel Blocker (L & T-type). It has a unique chemical structure. The phosphonate moiety (Figure 1) at the C5 position of the dihydropyridine ring is considered to be important for the characteristic pharmacological profile of the drug. (figure-1)

Peak plasma concentration is achieved in about 1.5 to 3.67 hours after administration. Half life is approximately 4 hours. The pharmacokinetic parameters of Efonidipine are depicted in Table-1.

Efonidipine has a slow onset and a long duration of action. This unique characteristic of Efonidipine is because of the following reasons:[13]

Use in Special Population

The drug should be started at low dose (20 mg/day) in elderly. Patient should be carefully observed for development of hypo-tension. Dose may be halved if there is intolerance to the 20 mg/day dosage regimen.

The drug should not be administered to pregnant women and women suspected of being pregnant. Administration to lactating women should be avoided unless benefit significantly surpasses the risk to the child. Mothers on Efonidipine treatment should avoid breast feeding.

Safety of Efonidipine in low birth weight infants, newborns, infants and children has not been established.

Efonidipine is unique among clinically available CCBs. Its antihypertensive efficacy is superior or at par with other CCBs. But, in terms of pleiotropic effects leading to enhanced cerebral, cardiac and renal protection, Efonidipine scores over the other CCBs.

2.       Preferred in  angina  with hypertension due to negative chronotropic action[26]

6.       Better protection  against cardiac hypertrophy by significant reduction in LVMI[29]

L & T-type CCBs have invoked a lot of interest in the management of hypertension because of their unique pharmacological profile. Several novel agents have been developed including Azelnidipine, Barnidipine, Benidipine, Efonidipine, Manidipine and Nilvadipine. Among all the agents, Efonidipine has emerged as the best among its peers. The advantages of Efonidipine over Benidipine are summarized below.

A new synthesis for (4S)-efonidipine has been described: The reaction of 5,5-dimethyl-2-(2-oxopropyl)-1,3,2-dioxaphosphorinan-2-one (I) with dimorpholino(3-nitrophenyl)methane (II) by means of trifluoroacetic acid in hot toluene gives 5,5-dimethyl-2-[1-acetyl-2-(3-nitrophenyl)vinyl]-1,3,2-dioxaphosphorina n-2-one (III), which is cyclized with 3-aminocrotonic acid 2(S)-methoxy-2-phenylethyl ester (IV) in refluxing toluene; the recrystallization of the resulting product affords 5-(5,5-dimethyl-2-oxo-1,3,2-dioxaphosphorinan-2-yl)-2,6-dimethyl-4(S)-(3-nitrophenyl)-1,4-dihydropyridine-3-carboxylic acid 2(S)-methoxy-2-phenylethyl ester (V). The protection of the NH group of (V) with chloromethyl methyl ether and NaH in THF yields the N-methoxymethyl derivative (VI), which is transesterified with 2-(N-benzyl-N-methylamino)ethanol (VII) and NaH in DMSO, giving the protected final product (VIII). Finally, this compound is deprotected with HCl in ethanol.

An enantioselective synthesis of efonidipine has been described: The enantioselective hydrolysis of 5-(5,5-dimethyl-2-oxo-1,3,2-dioxaphosphorinan-2-yl)-2,6-dimethyl-4-(3-n itrophenyl)-1,4-dihydropyridine-3-carboxylic acid propionyloxymethyl ester (I) with lipase AH in 2,5-dimethyltetrahydrofuran saturated with water gives the corresponding free acid of the (S)-isomer (III), while the propionyloxymethyl ester of the (R)-isomer (II) remains undisturbed. After chromatographic separation, the (R)-ester (II) is hydrolyzed with NaOH in methanol to the (R)-acid (IV). Finally, both enantiomerically pure acids (III) and (IV) are separately esterified with 2-(N-benzyl-N-phenylamino)ethanol in the usual way