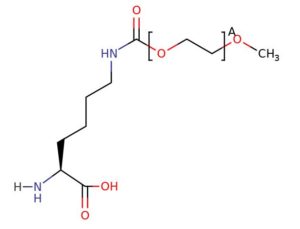 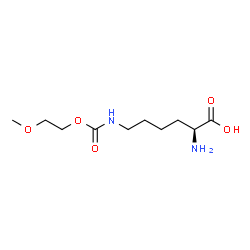 Elapegademase is a PEGylated recombinant adenosine deaminase. It can be defined molecularly as a genetically modified bovine adenosine deaminase with a modification in cysteine 74 for serine and with about 13 methoxy polyethylene glycol chains bound via carbonyl group in alanine and lysine residues.[4] Elapegademase is generated in E. coli, developed by Leadiant Biosciences and FDA approved on October 5, 2018.[1, 5]

Elapegademase is approved for the treatment of adenosine deaminase severe combined immune deficiency (ADA-SCID) in pediatric and adult patients.[1] This condition was previously treated by the use of pegamedase bovine as part of an enzyme replacement therapy.[2]

ADA-SCID is a genetically inherited disorder that is very rare and characterized by a deficiency in the adenosine deaminase enzyme. The patients suffering from this disease often present a compromised immune system. This condition is characterized by very low levels of white blood cells and immunoglobulin levels which results in severe and recurring infections.[3]

In clinical trials, elapegademase was shown to increase adenosine deaminase activity while reducing the concentrations of toxic metabolites which are the hallmark of ADA-SCID. As well, it was shown to improve the total lymphocyte count.[6]

The ADA-SCID is caused by the presence of mutations in the ADA gene which is responsible for the synthesis of adenosine deaminase. This enzyme is found throughout the body but it is mainly active in lymphocytes. The normal function of adenosine deaminase is to eliminate deoxyadenosine, created when DNA is degraded, by converting it into deoxyinosine. This degradation process is very important as deoxyadenosine is cytotoxic, especially for lymphocytes. Immature lymphocytes are particularly vulnerable as deoxyadenosine kills them before maturation making them unable to produce their immune function.[3]

Therefore, based on the causes of ADA-SCID, elapegademase works by supplementing the levels of adenosine deaminase. Being a recombinant and an E. coli-produced molecule, the use of this drug eliminates the need to source the enzyme from animals, as it was used previously.[1]

Elapegademase is administered intramuscularly and the reported Tmax, Cmax and AUC are approximately 60 hours, 240 mmol.h/L and 33000 hr.mmol/L as reported during a week.[Label]

This pharmacokinetic property is not significant as the main effect is in the blood cells.

Metabolism studies have not been performed but it is thought to be degraded by proteases to small peptides and individual amino acids.

As elapegademase is a therapeutic protein, there is a potential risk of immunogenicity.

There are no studies related to overdose but the highest weekly prescribed dose in clinical trials was 0.4 mg/kg. In nonclinical studies, a dosage of 1.8 fold of the clinical dose produced a slight increase in the activated partial thromboplastin time.[Label]