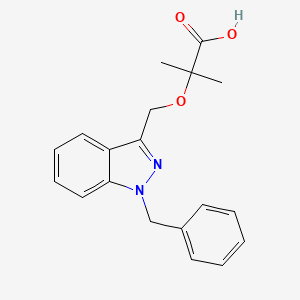 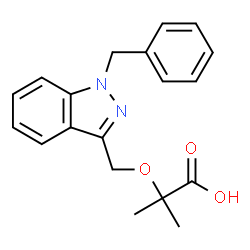 As is known, MCP-1 (Monocyte Chemotactic Protein-1 ) is a protein belonging to the β subfamily of chemokines. MCP-1 has powerful chemotactic action on monocytes and exerts its action also on T lymphocytes, mastocytes and basophils (Rollins BJ. , Chemokines, Blood 1997; 90: 909-928; M.

The β subfamily differs from the α subfamily in that, in the structure, the first two cysteines are adjacent for the β subfamily, whereas they are separated by an intervening amino acid for the α subfamily. MCP-1 is produced by various types of cells (leukocytes, platelets, fibroblasts, endothelial cells and smooth muscle cells).

Among all the known chemokines, MCP-1 shows the highest specificity for monocytes and macrophages, for which it constitutes not only a chemotactic factor but also an activation stimulus, consequently inducing processes for producing numerous inflammatory factors (superoxides, arachidonic acid and derivatives, cytokines/chemokines) and amplifying the phagocytic activity.

Prevention of the inflammatory response by blocking the chemokine/chemokine receptor system represents one of the main targets of pharmacological intervention (Gerard C. and Rollins B. J., Chemokines and disease. Nature Immunol. 2001 ; 2:108-1 15).

There is much evidence to suggest that MCP-1 plays a key role during inflammatory processes and has been indicated as a new and validated target in various pathologies.

Evidence of a considerable physiopathological contribution of MCP-1 has been obtained in the case of patients with articular and renal inflammatory diseases (rheumatoid arthritis, lupus nephritis, diabetic nephropathy and rejection following transplant).

However, more recently, MCP-1 has been indicated among the factors involved in inflammatory pathologies of the CNS (multiple sclerosis, Alzheimer’s disease, HIV-associated dementia) and other pathologies and conditions, with and without an obvious inflammatory component, including atopic dermatitis, colitis, interstitial lung pathologies, restenosis, atherosclerosis, complications following a surgical intervention (for instance angioplasty, arterectomy, transplant, organ and/or tissue replacement, prosthesis implant), cancer (adenomas, carcinomas and metastases) and even metabolic diseases such as insulin resistance and obesity.

In addition, despite the fact that the chemokine system is involved in controlling and overcoming viral infections, recent studies have demonstrated that the response of certain chemokines, and in particular of MCP-1 , may have a harmful role in the case of host-pathogen interactions. In particular, MCP-1 has been indicated among the chemokines that contribute towards organ and tissue damage in pathologies mediated by alpha viruses characterized by monocyte/macrophage infiltration in the joints and muscles (Mahalingam S. et al. Chemokines and viruses: friend or foes? Trends in Microbiology 2003; 1 1 : 383-391 ; RuIIi N. et al. Ross River Virus: molecular and cellular aspects of disease pathogenesis. 2005; 107: 329-342).

Monocytes are the main precursors of macrophages and dendritic cells, and play a critical role as mediators of inflammatory processes. CX3CR1 , with its ligand CX3CL1 (fractalkine), represents a key factor in regulating the migration and adhesiveness of monocytes. CX3CR1 is expressed in monocytes, whereas CX3CL1 is a transmembrane chemokine in endothelial cells. Genetic studies in man and in animal models have demonstrated an important role in the physiopathology of inflammatory diseases of CX3CR1 and CX3CL1. There is in fact much evidence to suggest a key contribution of CX3CR1 and of its ligand in the pathogenesis and progression of articular, renal, gastrointestinal and vascular inflammatory diseases (e.g. rheumatoid arthritis, lupus nephritis, diabetic nephropathy, Crohn’s disease, ulcerative colitis, restenosis and atherosclerosis). The expression of CX3CR1 is over-regulated in T cells, which are believed to accumulate in the synovium of patients suffering from rheumatoid arthritis. In addition, the expression of CX3CL1 is over-regulated in endothelial cells and fibroblasts present in the synovium of these patients. Consequently, the CX3CR1/CX3CL1 system plays an important role in controlling the type of cell and the mode of infiltration of the synovium and contributes towards the pathogenesis of rheumatoid arthritis (Nanki T. et al., “Migration of CX3CR1-positive T cells producing type 1 cytokines and cytotoxic molecules into the synovium of patients with rheumatoid arthritis”, Arthritis & Rheumatism (2002), vol. 46, No. 1 1 , pp. 2878-2883). In patients suffering form renal damage, the majority of the inflammatory leukocytes that infiltrate the kidneys express CX3CR1 , and in particular it is expressed on two of the main cell types involved in the most common inflammatory renal pathologies and in kidney transplant rejection, T cells and monocytes (Segerer S. et al., Expression of the fractalkine receptor (CX3CR1 ) in human kidney diseases, Kidney International (2002) 62, pp. 488-495).

Participation of the CX3CR1/CX3CL1 system has been suggested also in inflammatory bowel diseases (IBD). In point of fact, in the case of patients suffering from IBD (e.g. Crohn’s disease, ulcerative colitis), a significant increase in the production of CX3CL1 by the intestinal capillary system and a – A – significant increase in CX3CR1 -positive cells have been demonstrated, both at the circulatory level and in the mucosa (Sans M. et al., “Enhanced recruitment of CX3CR1 + T cells by mucosal endothelial cell-derived fractalkine in inflammatory bowel diseases”, Gastroenterology 2007, vol. 132, No. 1 , pp. 139-153).

Even more interesting is the demonstration of the key role played by the CX3CR1/CX3CL1 system in vascular damage and in particular under pathological conditions, for instance atherosclerosis and restenosis. CX3CR1 is indicated as a critical factor in the process of infiltration and accumulation of monocytes in the vascular wall, and CX3CR1 polymorphism in man is associated with a reduced prevalence of atherosclerosis, coronary disorders and restenosis (Liu P. et al., “Cross-talk among Smad, MAPK and integrin signalling pathways enhances adventitial fibroblast functions activated by transforming growth factor-1 and inhibited by Gax” Arterioscler. Thromb. Vase. Biol. 2008; McDermott D. H. et al., “Chemokine receptor mutant CX3CR1 -M280 has impaired adhesive function and correlates with protection from cardiovascular diseases in humans”, J. Clin. Invest. 2003; Niessner A. et al., Thrombosis and Haemostasis 2005).

Despite these similarities, there is much evidence to suggest that IL-12 and IL-23 control different immunological circuits. In point of fact, whereas IL-12 controls the development of Th1 cells, which are capable of producing gamma-interferon (IFN-γ), and increases the cytotoxic, antimicrobial and antitumoral response, IL-23 regulates a circuit that leads to the generation of CD4+ cells, which are capable of producing IL-17. The induction of IL-23- dependent processes leads to the mobilization of various types of inflammatory cell, for instance TH-17, and it has been demonstrated as being crucial for the pathogenesis of numerous inflammatory pathologies mediated by immonological responses. Typical examples of pathologies associated with the expression of p40 are chronic inflammatory diseases of the articular apparatus (e.g. rheumatoid arthritis), of the dermatological apparatus (e.g. psoriasis) and of the gastrointestinal apparatus (e.g. Crohn’s disease). However, IL-23 also exerts a role in promoting tumour incidence and growth. In point of fact, IL-23 regulates a series of circuits in the tumoral microenvironment, stimulating angiogenesis and the production of inflammation mediators.

Psoriasis is a chronic inflammatory skin disease that affects 3% of the world’s population (Koo J. Dermatol. Clin. 1996; 14:485-96; Schon M. P. et al., N. Engl. J. Med. 2005; 352: 1899-912). A type-1 aberrant immune response has been correlated with the pathogenesis of psoriasis, and the cytokines that induce this response, such as IL-12 and IL-23, may represent suitable therapeutic objects. The expression of IL-12 and IL-23, which share the subunit p40, is significantly increased in psoriasis plaques, and preclinical studies have demonstrated a role of these cytokines in the pathogenesis of psoriasis. More recently, the treatment of anti- IL-12 and IL-23 monoclonal antibodies of patients suffering from psoriasis proved to be effective in improving the signs of progression and seriousness of the disease and has subsequently reinforced the role of IL-12 and IL-23 in the physiopathology of psoriasis. Crohn’s disease is a chronic inflammatory pathology of the digestive apparatus and may affect any region thereof – from the mouth to the anus. It typically afflicts the terminal tract of the ileum and well-defined areas of the large intestine. It is often associated with systemic autoimmune disorders, such as mouth ulcers and rheumatic arthritis. Crohn’s disease affects over 500 000 people in Europe and 600 000 people in the United States.

Crohn’s disease is a pathology associated with a Th1 cell-mediated excessive activity of cytokines. IL-12 is a key cytokine in the initiation of the inflammatory response mediated by Th1 cells. Crohn’s disease is characterized by increased production of IL-12 by cells presenting the antigen in intestinal tissue, and of gamma-interferon (IFN-γ) and TNFα by lymphocytes and intestinal macrophages. These cytokines induce and support the inflammatory process and thickening of the intestinal wall, which are characteristic signs of the pathology. Preclinical and clinical evidence has demonstrated that inhibition of IL-12 is effective in controlling the inflammatory response in models of intestinal inflammation and/or in patients suffering from Crohn’s disease.

Despite the activity developed thus far, there is still felt to be a need for novel pharmaceutical compositions and compounds that are effective in the treatment of diseases based on the expression of MCP-1 , CX3CR1 and p40. The Applicant has found, surprisingly, novel 1-benzyl-3-hydroxymethylindazole derivatives with pharmacological activity.

Even more surprisingly, the Applicant has found that the 1-benzyl-3-hydroxymethylindazole derivatives according to formula (I) of the present invention are capable of reducing the expression of the subunit p40 involved in the production of the cytokines IL-12 and IL-23, and the expression of the receptor CX3CR1. 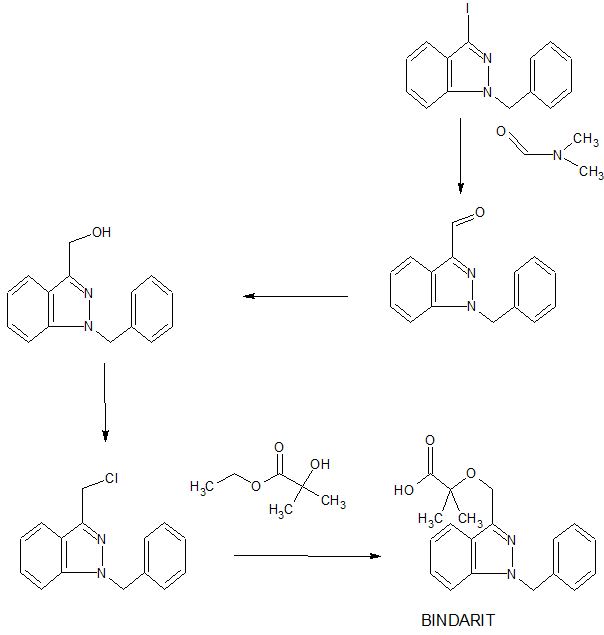 2-[(1 -benzyl-1 H-indazol-3-yl)methoxy]-2-methylpropanoic acid The preparation of product 29 was performed as described in patent application EP 382 276.

117 mmol, 1 eq.) in toluene (90 ml_) and DMF (60 ml_) was then added dropwise. The reaction mixture was heated to approximately 90°C and kept at that temperature until the reaction was complete (checked by TLC, approximately 10 hours). After cooling to room temperature the mixture was washed with acidified water and water. The organic phase was concentrated under reduced pressure and the oily residue obtained was treated with 10 M NaOH (36 ml_) at reflux temperature for at least 3 hours. The product, which was precipitated out by the addition of concentrated HCI, was filtered and dried. Yield: 32.3 g of white solid (85%).