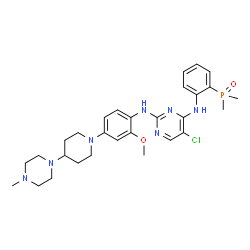 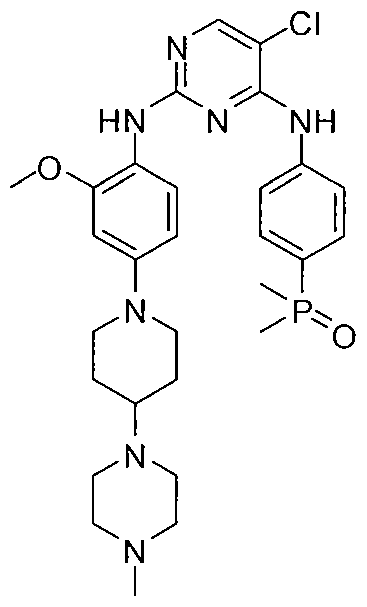 Dr. Wang founded Shenzhen TargetRx, Inc., in Aug 2014 and is now the  President/CEO. He  was the Associate Director of Chemistry at ARIAD  Pharmaceuticals, Inc., until April 2013.  Yihan Wang received his B.Sc. in  chemistry from University of Science and Technology of  China, and Ph.D.  in chemistry from New York University. Yihan’s research has focused    primarily on medicinal chemistry in the area of signal transduction drug  discovery,  integrating structure-based drug design, combinatorial  chemistry, and both biological and  pharmacological assays to identify  small-molecule clinical candidates. His career at ARIAD  includes innovative research in therapeutic areas involving bone diseases and cancer, and has  been a key contributor to the discovery of several clinical drugs, including Ponatinib (iClusigTM) (approved by the FDA for resistant CML in Dec 2012), Brigatinib (AP26113, Phase II for NSCLC), Ridoforolimus (Phase III for Sarcoma and multiple Phase II), and several pre-clinical compounds. Yihan is the primary author of approximately 90 peer-reviewed publications, patents, and invited meeting talks. Yihan is the editor of “Chemical Biology and Drug Design” and a reviewer for many professional journals.

Yihan is one of the co-founders of Chinese-American BioMedical Association (CABA) and currently on the Board of Directors.

(dimethylphosphoryl)phenyl]pyrimidin-4-amine (0.005g, O.lόmmol) in ImL of 2-methoxyethanol was added 2-methoxy-4-[4-(4-methylpiperazin-l-yl)piperidin-l-yl]aniline (0.7 Ig, 0.16 mmol). The mixture was stirred at 1100C for 18h. The mixture was basified with saturated sodium bicarbonate solution and extracted with limited amount of ethyl acetate. The aqueous layer was purified by chromatography to give the final product (0.015g, 20% yield). MS/ES+: m/z=583. SYNTHESIS
WILL BE ADDED WATCH OUT…………. 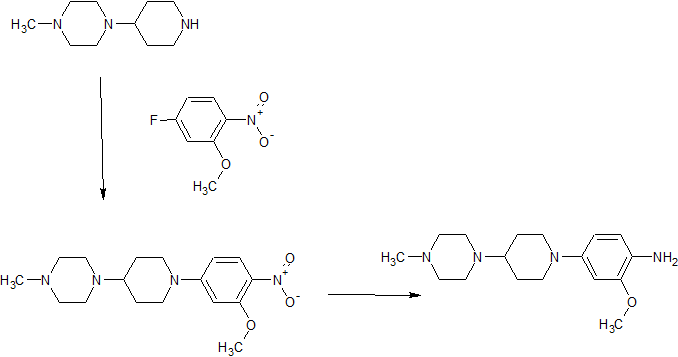 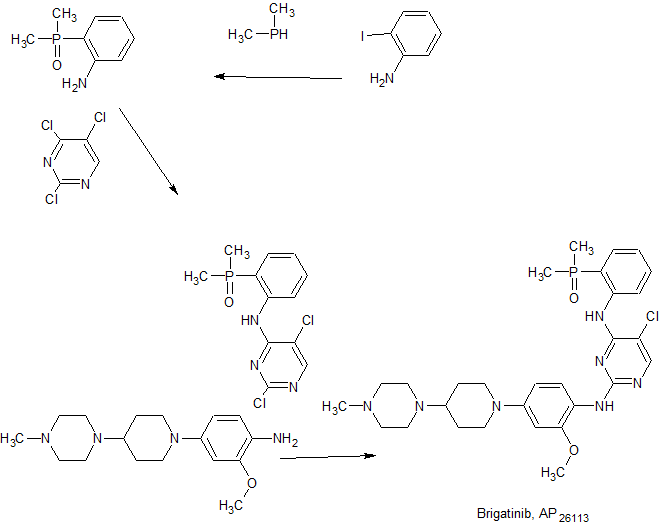 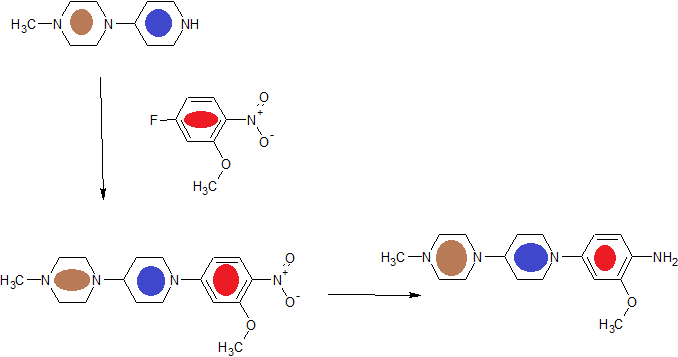 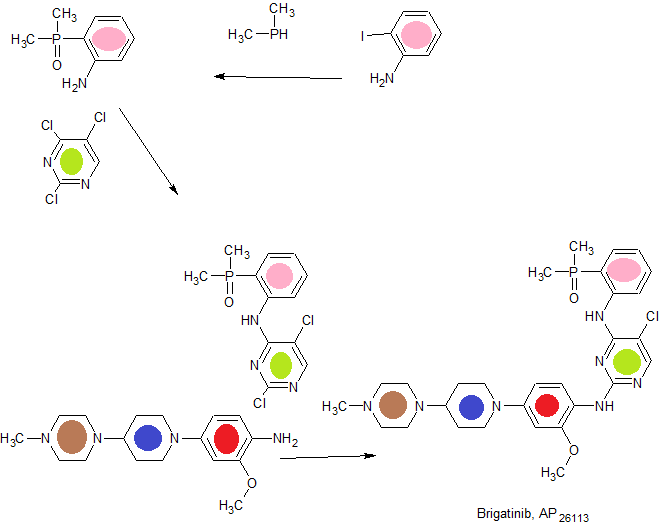 Dual ALK EGFR Inhibitor AP26113 is an orally available inhibitor of receptor tyrosine kinases anaplastic lymphoma kinase (ALK) and the epidermal growth factor receptor (EGFR) with potential antineoplastic activity. Brigatinib binds to and inhibits ALK kinase and ALK fusion proteins as well as EGFR and mutant forms. This leads to the inhibition of ALK kinase and EGFR kinase, disrupts their signaling pathways and eventually inhibits tumor cell growth in susceptible tumor cells. In addition, AP26113 appears to overcome mutation-based resistance. ALK belongs to the insulin receptor superfamily and plays an important role in nervous system development; ALK dysregulation and gene rearrangements are associated with a series of tumors. EGFR is overexpressed in a variety of cancer cell types.

ARIAD has begun a Phase 1/2 clinical trial of brigatinib based on cancer patients’ molecular diagnoses in September 2011.

ALK was first identified as a chromosomal rearrangement in anaplastic large cell lymphoma (ALCL). Genetic studies indicate that abnormal expression of ALK is a key driver of certain types of non-small cell lung cancer (NSCLC) and neuroblastomas, as well as ALCL. Since ALK is generally not expressed in normal adult tissues, it represents a highly promising molecular target for cancer therapy.

Epidermal growth factor receptor (EGFR) is another validated target in NSCLC. Additionally, the T790M “gatekeeper” mutation is linked in approximately 50 percent of patients who grow resistant to first-generation EGFR inhibitors.[2] While second-generation EGFR inhibitors are in development, clinical efficacy has been limited due to toxicity thought to be associated with inhibiting the native (endogenous or unmutated) EGFR. A therapy designed to target EGFR, the T790M mutation but avoiding inhibition of native EGFR is another promising molecular target for cancer therapy.

In 2010, ARIAD announced results of preclinical studies on brigatinib showing potent inhibition of the target protein and of mutant forms that are resistant to the first-generation ALK inhibitor, which currently is in clinical trials in patients with cancer. ARIAD scientists presented these data at the annual meeting of the American Association for Cancer Research (AACR) in Washington, D.C. in April.[3]

In 2011, ARIAD announced preclinical studies showing that brigatinib potently inhibited activated EGFR or its T790M mutant, both in cell culture and in mouse tumor models following once daily oral dosing. Importantly, the effective oral doses in these preclinical models were similar to those previously shown to be effective in resistant ALK models. When tested against the native form of EGFR, brigatinib lacked activity, indicating a favorable selectivity for activated EGFR. These data were presented at the International Association for the Study of Lung Cancer (IASLC) 14th World Conference on Lung Cancer.[4]

In April 2015, ARIAD announced the initiation of a randomized, first-line Phase 3 clinical trial of brigatinib in adult patients with ALK-positive locally advanced or metastatic non-small cell lung cancer (NSCLC) who have not previously been treated with an ALK inhibitor. The ALTA 1L (ALK in Lung Cancer Trial of BrigAtinib in 1st Line) trial is designed to assess the efficacy of brigatinib in comparison to crizotinib based on evaluation of the primary endpoint of progression free survival (PFS).  Read Full Press Release

In March 2014, ARIAD announced the initiation of its global Phase 2 ALTA (ALK in Lung Cancer Trial of brigatinib (AP26113) in patients with locally advanced or metastatic NSCLC who test positive for the ALK oncogene and were previously treated with crizotinib. This trial has reached full enrollment of approximately 220 patients and explores two different dose levels. Read Full Press Release

The international Phase 1/2 clinical trial of brigatinib (AP26113) is being conducted in patients with advanced malignancies, including anaplastic lymphoma kinase positive (ALK+) non-small cell lung cancer (NSCLC). Patient enrollment in the trial is complete, with the last patient enrolled in July 2014. The primary endpoint in the Phase 2 portion of the trial is overall response rate. In April 2016, ARIAD announced updated clinical data from the trial. Read Full Press Release

The purpose of this Expanded Access Program (EAP) is to provide brigatinib for those patients with locally advanced and/or metastatic patients with ALK+ NSCLC on an expanded access basis due to their inability to meet eligibility criteria for on-going recruiting trials, inability to participate in other clinical trials (e.g., poor performance status, lack of geographic proximity), or because other medical interventions are not considered appropriate or acceptable.

Brigatinib (AP26113) is an investigational, targeted cancer medicine discovered internally at ARIAD Pharmaceuticals, Inc. It is in development for the treatment of patients with anaplastic lymphoma kinase positive (ALK+) non-small cell cancer (NSCLC) whose disease is resistant to crizotinib. Brigatinib is currently being evaluated in the global Phase 2 ALTA (ALK in Lung Cancer Trial of AP26113) trial that is anticipated to form the basis for its initial regulatory review. ARIAD has also initiated the Phase 3 ALTA 1L trial to assess the efficacy of brigatinib in comparison to crizotinib. In June 2016, an Expanded Access Study of brigatinib will begin. More information on brigatinib clinical trials, including the expanded access program (EAP) for ALK+ NSCLC can be found here.

Brigatinib was granted orphan drug designation by the U.S. Food and Drug Administration (FDA) in May 2016 for the treatment of certain subtypes of non-small cell lung cancer (NSCLC). The designation is for anaplastic lymphoma kinase-positive (ALK+), c-ros 1 oncogene positive (ROS1+), or epidermal growth factor receptor positive (EGFR+) non-small cell lung cancer (NSCLC). Brigatinib received breakthrough therapy designation from the FDA in October 2014 for the treatment of patients with ALK+ NSCLC whose disease is resistant to crizotinib. Both designations were based on results from an ongoing Phase 1/2 trial that showed anti-tumor activity of brigatinib in patients with ALK+ NSCLC, including patients with active brain metastases.

We are on track to file for approval of brigatinib in the U.S. in the third quarter of 2016.

Brigatinib has the chemical formula C29H39QN7G2P which, corresponds to a formula weight of 584.09 g/moL Its chemical structure is shown below:

Brigatinib is a multi-targeted tyrosine-kinase inhibitor useful for the treatment of non-small cell lung cancer (NSCLC) and other diseases, it is a potent inhibitor of ALK (anaplastic lymphoma kinase} and is in clinical development for the treatment of adult patients with ALK-driven NSCLC. Crizotinib (XALKOR!®) is an FDA approved drug for first-line treatment ‘of ALK-positive NSCLC. “Despite initial responses to crizotinib, the majority of patients have a relapse within 12 months, owing to the development of resistance.” Shaw et al., New Eng. J. Med. 370:1 189-97 2014. Thus, a growing population of cancer patients are in need of new and effective therapies for ALK-positive cancers.

Brigatinib is also potentially useful for treating other diseases or conditions in which ALK or other protein kinases inhibited by brigatinib are implicated. Such kinases and their associated disorders or conditions are disclosed in WO 2009/143389, both of which are hereby incorporated herein by reference for all purposes.

FIG. 1 is a synthetic scheme for brigatinib, 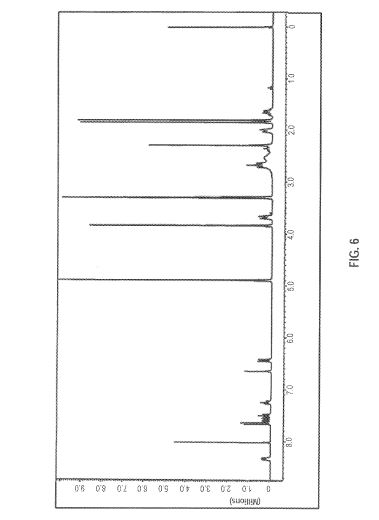 FIG. 6 is an 1H-Niv1R spectrum obtained for a sample of brigatinib dissolved in CD3OD. Normalised intensity is shown on the vertical axis and chemical shift (ppm) is shown on the horizontal axis.

FIG. 7 is a 13C-NMR spectrum obtained for a sample of brigatinib dissolved in CDCi3. Normalized intensity is shown on the vertical axis and chemical shift (ppm) is shown on the horizontal axis. 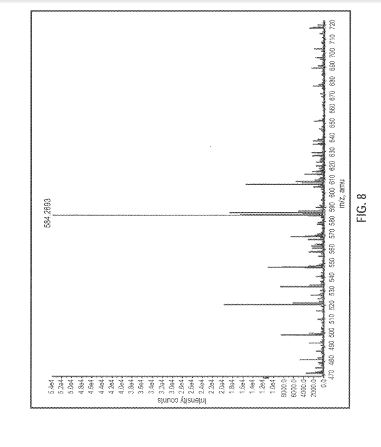 FIG. 8 is a mass spectral fragmentation pattern of a sample of brigatinib Form A. Relative abundance is shown on the vertical axis and atomic weight (m/z) is shown on the horizontal axis.

the ‘Ή, and 13C-N R experiments. The number of signals and their relative intensity (integrals) confinri the number of protons and carbons in the structure of Form A of brigatinib. The 31P-NMR chemical shift for the single phosphorous atom in brigatinib was 43.6 ppm. These 1H and 13C-NMR chemical shift data are reported according to the atom numbering scheme shown immediately below:

Table 2: 1H and 3C Chemical Shift Data (in ppm) of Form A of Brigatinib

[00118] With reference to Figure 8, mass spectral experiments of Form A were carried out using an Agilsent eiectrospray time of fisght mass spectrometer (Model 6210} operating in positive son mode using flow injection sampie introduction. Samples of Form A were dissolved in methanol/water and were analyzed and the mass observed was m/ 584.263 ( +f-T) with the calculated exact mass being 584.2684 ( +H+). The observed moiecuiar mass is consistent with the elemental composition calculated from the molecular formula of brigatinib.

In the treatment of echinoderm microtubule-associated protein-like 4 (EML4)-anaplastic lymphoma kinase positive (ALK+) non-small-cell lung cancer (NSCLC), secondary mutations within the ALK kinase domain have emerged as a major resistance mechanism to both first- and second-generation ALK inhibitors. This report describes the design and synthesis of a series of 2,4-diarylaminopyrimidine-based potent and selective ALK inhibitors culminating in identification of the investigational clinical candidate brigatinib. A unique structural feature of brigatinib is a phosphine oxide, an overlooked but novel hydrogen-bond acceptor that drives potency and selectivity in addition to favorable ADME properties. Brigatinib displayed low nanomolar IC50s against native ALK and all tested clinically relevant ALK mutants in both enzyme-based biochemical and cell-based viability assays and demonstrated efficacy in multiple ALK+ xenografts in mice, including Karpas-299 (anaplastic large-cell lymphomas [ALCL]) and H3122 (NSCLC). Brigatinib represents the most clinically advanced phosphine oxide-containing drug candidate to date and is currently being evaluated in a global phase 2 registration trial.

“ALL FOR DRUGS” CATERS TO EDUCATION GLOBALLY, No commercial exploits are done or advertisements added by me. This article is a compilation for educational purposes only.

P.S. : The views expressed are my personal and in no-way suggest the views of the professional body or the company that I represent