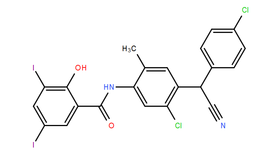 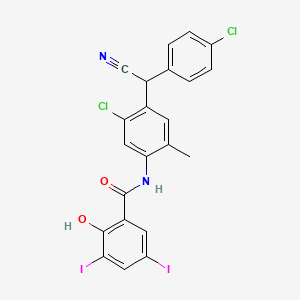 N-{5-chloro-4-[(4-chlorophenyl)(cyano)methyl]-2-methylphenyl}-2-hydroxy-3,5-diiodobenzamide is an aromatic amide resulting from the formal condensation of the carboxy group of 3,5-diiodosalicylic acid with the amino group of aniline substituted at positions 2, 4, and 5 by methyl, (4-chlorophenyl)(cyano)methyl, and methyl groups respectively. It is a nitrile, a member of phenols, an organoiodine compound, a monocarboxylic acid amide, an aromatic amide and a member of monochlorobenzenes.

Closantel sodium (Closantel Sodium) is a kind of very strong oxidative phosphorylation uncoupler, can suppress the mitochondrial phosphorylation process of polypide, nematode and insect etc. are contacted with blood circulation closely or sucking blood property worm all has and efficiently kills effect, be a kind of broad-spectrum de-worming medicine of efficient, low toxicity, it is huge on market a very large development potentiality.
And 4-chloro-phenyl–(the chloro-4-amino of 2–5-aminomethyl phenyl) cyano group methane is a kind of key intermediate for the synthesis of closantel sodium.But in prior art, the report of the synthetic method of relevant 4-chloro-phenyl–(the chloro-4-amino of 2–5-aminomethyl phenyl) cyano group methane is actually rare, is mainly the iron powder reducing synthetic method.As United States Patent (USP) (US4005218) relates to a kind of with the chloro-α of 4–[the chloro-4-of 2-(hydroxyl imido grpup)-5-methyl-2, the 5-phenylidene] benzyl cyanide (I) is raw material, with excessive iron powder, in ammonium chloride, water and toluene mixing solutions, heating reflux reaction, filter, clean filter cake with a large amount of solvents as tetrahydrofuran (THF) or 4-methyl-2 pentanone, filtrate boils off solvent, then adds the toluene recrystallization to obtain 4-chloro-phenyl–(the chloro-4-amino of 2–5-aminomethyl phenyl) cyano group methane (II).This reaction equation is:
But it is loaded down with trivial details that the shortcoming of the method is operating procedure, the supplementary material consumption is large, and, with producing a large amount of scrap iron powder after iron powder reducing, comparatively thickness, easily comprise product and impurity, and cost recovery is very high, and labour intensity is large, larger to the pollution effect of environment; And product yield and product quality lower.