March 28, 2021anti bacterial, UncategorizedComments: 0
It's only fair to share...

Dirithromycin is a macrolide glycopeptide antibiotic.[1]

Dirithromycin (Dynabac) is a more lipid-soluble prodrug derivative of 9S-erythromycyclamine prepared by condensation of the latter with 2-(2-methoxyethoxy)acetaldehyde. The 9N, 11O-oxazine ring thus formed is a hemi-aminal that is unstable under both acidic and alkaline aqueous conditions and undergoes spontaneous hydrolysis to form erythromycyclamine. Erythromycyclamine is a semisynthetic derivative of erythromycin in which the 9-ketogroup of the erythronolide ring has been converted to an amino group. Erythromycyclamine retains the antibacterial properties of erythromycin oral administration. The prodrug, dirithromycin, is provided as enteric coated tablets to protect it from acid catalyzed hydrolysis in the stomach. Orally administered dirithromycin is absorbed rapidly into the plasma, largely from the small intestine. Spontaneous hydrolysis to erythromycyclamine occurs in the plasma. Oral bioavailability is estimated to be about 10%, but food does not affect absorption of the prodrug. 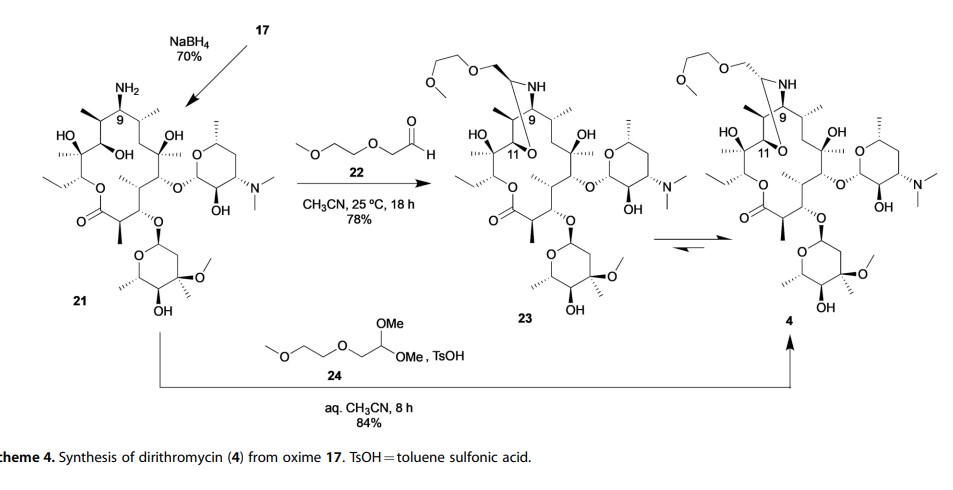 In attempts to modify the C-9 keto moiety of erythromycin, (9S)-erythromycinylamine (21) was prepared by the reduction of oxime 17 with sodium borohydride (Scheme 4).[13] Amine 21 displayed good in vitro antimicrobial activity against Staphylococcus aureus, [38–44] but had poor bioavailability due to the polar primary amine. In search of compounds in this class with better oral bioavailability, efforts were directed towards masking the amine in 21 as an imine with aromatic and aliphatic aldehydes.[40] These efforts were based on the idea that such imines would be hydrolysed at physiological pH after absorption from the intestine, but somewhat unexpectedly, lead to the discovery of dirithromycin (4) when 21 was treated with aldehyde 22. In this reaction, 9- N-11-O-oxazine epi-dirithromycin (23) is first formed as the kinetic product, which then undergoes conversion into the thermodynamically stable dirithromycin (4).[45–47] Due to issues with the stability of aldehyde 22 on process-scale synthesis, this procedure was later modified so that dimethyl acetal 24 was used for commercial production.[48]

Dirithromycin is the second-generation erythromycin macrocyclic (fourteen member ring) lactone antibiotics; made from the condensation reaction between 2-methoxyethoxy acetaldehyde and erythromycylamine. It has similar structure to erythromycin. It can subject to in vivo non-enzymatic hydrolysis into erythromycin cyclic amines. It takes effect through targeting the 50S ribosomal subunit of sensitive pathogenic microorganisms, blocking the bacterial peptide bond formation, which further inhibits protein synthesis to play antibacterial activity.

Compared with erythromycin and other new macrocyclic lactone antibiotics, this drug has the following characteristics: (1) antibacterial effect: in addition to retaining the antibacterial effect against gram positive bacteria; it also has strong effect on a variety of G- bacteria, Anaerobic bacteria and other pathogens, such as Mycoplasma, Chlamydia and spirochete. Dirithromycin has stronger effect than erythromycin on Staphylococcus aureus and Staphylococcus epidermidis. (2) Pharmacokinetics: compared with other macrolide antibiotics in the vine, the half-life of erythromycin is longer with the plasma elimination tl/2 being longer than 24h. Its tissue permeability is strong. It can be administered once a day. So it will also be competitive in the market with characteristics that are different from other antibiotics.
Lilly’s products in the United States was listed in Spain in September 1993, listed in 1996 in US after the approval of FDA and had been included in Pharmacopoeia USP 23; it was listed in 2005 in the domestic market. At present, there are a number of domestic dysthromycin enteric-coated tablets and enteric-coated capsules approved for clinical use. 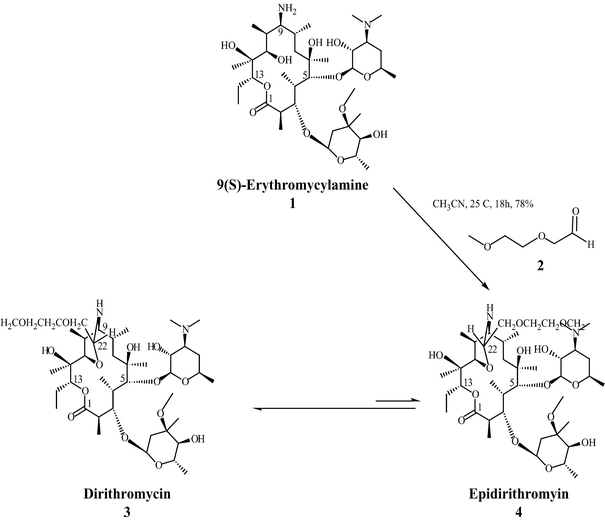