50 g (0.21 mol) R,S-ketamine are dissolved in 613 ml of acetone at the boiling point and subsequently mixed with 31.5 g (0.21 mol) L-(+)-tartaric acid. In order to obtain a clear solution, 40 ml of water are added thereto at the boiling point and subsequently the clear solution is filtered off while still hot. After the addition of seed crystals obtained in a small preliminary experiment, the whole is allowed to cool to ambient temperature while stirring. After standing overnight, the crystals formed are filtered off with suction and dried in a circulating air drying cabinet (first at ambient temperature and then at 50-60° C.).

Thereafter, the crystallisate is recrystallised in a mixture of 1226 ml acetone and 90 ml water. After cooling to ambient temperature and subsequently stirring for 4 hours, the crystals are filtered off with suction and dried in a circulating air drying cabinet (first at ambient temperature and then at 50-60° C). There are obtained 38.8 g of tartrate (95.29% of theory).

The base is liberated by taking up 38.8 g of tartrate in 420 ml of aqueous sodium hydroxide solution and stirring with 540 ml of diethyl ether. The ethereal phase is first washed with water and subsequently with a saturated solution of sodium chloride. The organic phase is dried over anhydrous sodium sulphate. After filtering, the solution is evaporated to dryness on a rotary evaporator, a crystalline, colourless product remaining behind.

In order possibly to achieve a further purification, the base can be recrystallised from cyclohexane. For this purpose, 10.75 g of the crude base are dissolved in 43 ml cyclohexane at the boiling point. While stirring, the clear solution is slowly cooled to about 10° C. and then stirred at this temperature for about 1 hour. The crystallisate which precipitates out is filtered off with suction and dried to constant weight.

125 ml of water are taken and subsequently 31.5 g (0.21 mol) L-(+)-tartaric acid and 50 g (0.21 mol) R,S-ketamine added thereto. While stirring, this mixture is warmed to 50-60° C. until a clear solution results. After cooling to ambient temperature while stirring and subsequently stirring overnight, the crystals formed are filtered off with suction. Subsequently, the crystallisate is first washed with water (1-6° C.) and subsequently washed twice with, in each case, 20 ml of acetone. Drying in a circulating air drying cabinet (first at ambient temperature and then at 50-60° C.) gives 31.79 g of tartrate (78.23%) of theory).

After cooling to ambient temperature while stirring and subsequently stirring overnight, the crystals formed are filtered off with suction. Subsequently, the crystallisate is successively washed with 8 ml of water (1-6° C.) and thereafter twice with, in each case, 20 ml acetone.

150 ml of water and 50 ml isopropanol are taken. After the addition of 39.8 g (0.21 mol) L-(+)-tartaric acid and 50 g (0.21 mol) R,S-ketamine, the mixture is heated to reflux temperature while stirring until a solution results (possibly add water until all is dissolved).

Subsequently, while stirring, the solution is allowed to cool to ambient temperature and stirred overnight. The crystals are filtered off with suction and subsequently washed with a 1:2 mixture of 20 ml of water/isopropanol and dried in a circulating air drying cabinet (first at ambient temperature and then at 50-60° C.). There are obtained 24.45 g of tartrate (62.63% of theory).

After standing overnight, the crystals formed are filtered off with suction, then washed twice with, in each case, 20 ml acetone and dried in a circulating air drying cabinet (first at ambient temperature and then at 50-60° C.). There are obtained 30.30 g of tartrate (74.57% of theory).

75 ml of water and 50 ml isopropanol are taken and subsequently 39.8 g (0.27 mol) L-(+)-tartaric acid added thereto. While stirring, the mixture is heated to reflux temperature until a clear solution results. After cooling to ambient temperature while stirring and subsequently stirring overnight, the crystals formed are filtered off with suction. Subsequently, the crystallisate is washed with a 1:2 mixture of 20 ml water/isopropanol. After drying in a circulating air drying cabinet (first at ambient temperature and then at 50-60° C.), there are obtained 34.84 g of tartrate (85.74% of theory).

5 g of the S-(-)-ketamine obtained in Example 7 are dissolved in 50 ml isopropanol at about 50° C. and possibly filtered off with suction over kieselguhr. Subsequently, gaseous hydrogen chloride is passed in at 50-60° C. until a pH value of 0-1 is reached. The reaction mixture is allowed to cool to ambient temperature, filtered off with suction and washed with about 5 ml isopropanol. The moist product is dried overnight at about 50° C. in a circulating air drying cabinet. There are obtained 5.09 g S-(+)-ketamine hydrochloride (88.06% of theory).

Here we report the direct asymmetric amination of α-substituted cyclic ketones catalyzed by a chiral phosphoric acid, yielding products with a N-containing quaternary stereocenter in high yields and excellent enantioselectivities. Kinetic resolution of the starting ketone was also found to occur on some of the substrates under milder conditions, providing enantioenriched α-branched ketones, another important building block in organic synthesis. The utility of this methodology was demonstrated in the short synthesis of (S)-ketamine, the more active enantiomer of this versatile pharmaceutical. 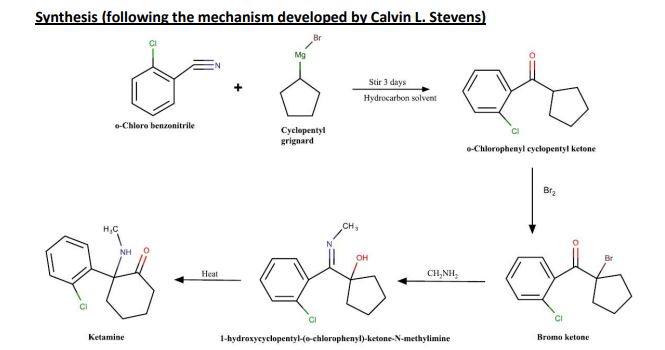 Process Research and Impurity Control Strategy of Esketamine Organic Process Research & Development ( IF 3.023
) Pub Date: 2020-03-18 , DOI: 10.1021/acs.oprd.9b00553
Shenghua Gao; Xuezhi Gao; Zhezhou Yang; Fuli Zhang
An improved synthesis of ( S )-ketamine (esketamine) has been developed, which was cost-effective, and the undesired isomer could be recovered by racemization. Critical process parameters of each step were identified as well as the process-related impurities. The formation mechanisms and control strategies of most impurities were first discussed. Moreover, the ( S )-ketamine tartrate is a dihydrate, which was disclosed for the first time. The practicable racemization catalyzed by aluminum chloride was carried out in quantitative yield with 99% purity . The ICH-grade quality ( S)-ketamine hydrochloride was obtained in 51.1% overall yield (14.0% without racemization) by chiral resolution with three times recycling of the mother liquors. The robust process of esketamine could be industrially scalable.

has been developed an improved ( S ) – ketamine (esketamine) synthesis, the high cost-effective way, the undesired isomer may be recycled by racemization. Determine the key process parameters and process-related impurities for each step. First, the formation mechanism and control strategy of most impurities are discussed. In addition, ( S )-ketamine tartrate is a dihydrate, which is the first time it has been published. The feasible racemization catalyzed by aluminum chloride proceeds in a quantitative yield with a purity of 99%. ICH grade quality ( S) 5-ketamine hydrochloride can be obtained through chiral resolution and three times the mother liquor recovery rate. The total yield is 51.1% (14.0% without racemization). The robust process of ketamine can be used in Industrial promotion. 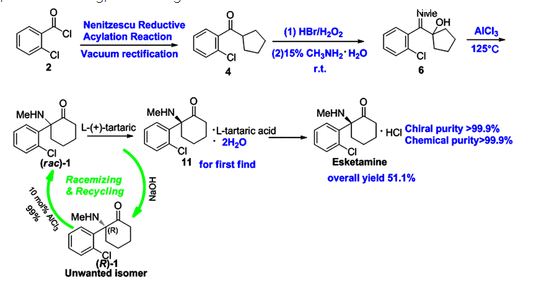 We present a novel asymmetric synthesis route for synthesis of (S)-ketamine using a chiral reagent according to the strategy (Scheme 1), with good enantioselectivity (85% ee) and yield. In this procedure, the (S)-tert-butanesulfinamide (TBSA) acts as a chiral auxiliary reagent to generate (S)-ketamine. A series of new intermediates were synthesized and identified for the first time in this work (2–4). The monoketal intermediate (1) easily obtained after partial conversion of one ketone functional group  of 1,2-cyclohexanedione into a ketal using ethylene glycol. The sulfinylimine (2) was obtained by condensation of (S)-tert-butanesulfinamide (TBSA) with (1), 4-dioxaspiro[4.5]decan-6-one in 90% yield. The (S)-N–tert-butanesulfinyl ketamine (3) was prepared on further reaction of sulfinylimine (2) with appropriate Grignard reagent (ArMgBr) in which generated chiral center in 85% yield and with 85% diastereoselectivity. Methylation of amine afforded the product (4). Finally, the sulfinyl- and ketal-protecting groups were removed from the compound (4) by brief treatment with stoichiometric quantities of HCl in a protic solvent gave the (S)-ketamine in near quantitative yield.

Esketamine, sold under the brand name Spravato[4] among others,[6][7] is a medication used as a general anesthetic and for treatment-resistant depression.[4][1] Esketamine is used as a nasal spray or by injection into a vein.[4][1]

Esketamine acts primarily as a non-competitive N-methyl-D-aspartate (NMDA) receptor antagonist.[1][8] It also acts to some extent as a dopamine reuptake inhibitor but, unlike ketamine, does not interact with the sigma receptors.[1] The compound is the S(+) enantiomer of ketamine, which is an anesthetic and dissociative similarly.[1] It is unknown whether its antidepressant action is superior, inferior or equal to racemic ketamine and its opposite enantiomer, arketamine, which are both being investigated for the treatment of depression.

Esketamine was introduced for medical use in 1997.[1] In 2019, it was approved for use with other antidepressants, for the treatment of depression in adults in the United States.[9]

In August 2020, it was approved by the U.S. Food and Drug Administration (FDA) with the added indication for the short-term treatment of suicidal thoughts.[10]

Esketamine is a general anesthetic and is used for similar indications as ketamine.[1] Such uses include induction of anesthesia in high-risk patients such as those with hemorrhagic shock, anaphylactic shock, septic shock, severe bronchospasm, severe hepatic insufficiency, cardiac tamponade, and constrictive pericarditis; anesthesia in caesarian section; use of multiple anesthetics in burns; and as a supplement to regional anesthesia with incomplete nerve blocks.[1]

Similarly to ketamine, esketamine appears to be a rapid-acting antidepressant.[8][11] It received a breakthrough designation from the FDA for treatment-resistant depression (TRD) in 2013 and major depressive disorder (MDD) with accompanying suicidal ideation in 2016.[12][11] The medication was studied for use in combination with an antidepressant in people with TRD who had been unresponsive to treatment;[12][8][11] six phase III clinical trials for this indication were conducted in 2017.[12][8][11] It is available as a nasal spray.[12][8][11]

In February 2019, an outside panel of experts recommended that the FDA approve the nasal spray version of esketamine,[13] provided that it be given in a clinical setting, with people remaining on site for at least two hours after. The reasoning for this requirement is that trial participants temporarily experienced sedation, visual disturbances, trouble speaking, confusion, numbness, and feelings of dizziness during immediately after.[14]

In January 2020, esketamine was rejected by the National Health Service of Great Britain. NHS questioned the benefits and claimed that it was too expensive. People who have been already using the medication were allowed to complete treatment if their doctors consider this necessary.[15]

Most common side effects when used in those with treatment resistant depression include dissociation, dizziness, nausea, sleepiness, anxiety, and increased blood pressure.[16]

A number of studies have suggested that esketamine has a more medically useful pharmacological action than arketamine or racemic ketamine[citation needed] but, in mice, that the rapid antidepressant effect of arketamine was greater and lasted longer than that of esketamine.[19] The usefulness of arketamine over eskatamine has been supported by other researchers.[20][21][22]

Esketamine inhibits dopamine transporters eight times more than arketamine.[23] This increases dopamine activity in the brain. At doses causing the same intensity of effects, esketamine is generally considered to be more pleasant by patients.[24][25] Patients also generally recover mental function more quickly after being treated with pure esketamine, which may be a result of the fact that it is cleared from their system more quickly.[17][26] This is however in contradiction with R-ketamine being devoid of psychotomimetic side effects.[27]

Unlike arketamine, esketamine does not bind significantly to sigma receptors. Esketamine increases glucose metabolism in frontal cortex, while arketamine decreases glucose metabolism in the brain. This difference may be responsible for the fact that esketamine generally has a more dissociative or hallucinogenic effect while arketamine is reportedly more relaxing.[26] However, another study found no difference between racemic and (S)-ketamine on the patient’s level of vigilance.[24] Interpretation of this finding is complicated by the fact that racemic ketamine is 50% (S)-ketamine.

Esketamine was introduced for medical use as an anesthetic in Germany in 1997, and was subsequently marketed in other countries.[1][28] In addition to its anesthetic effects, the medication showed properties of being a rapid-acting antidepressant, and was subsequently investigated for use as such.[8][12] In November 2017, it completed phase III clinical trials for treatment-resistant depression in the United States.[8][12] Johnson & Johnson filed a Food and Drug Administration (FDA) New Drug Application (NDA) for approval on September 4, 2018;[29] the application was endorsed by an FDA advisory panel on February 12, 2019, and on March 5, 2019, the FDA approved esketamine, in conjunction with an oral antidepressant, for the treatment of depression in adults.[9]

Esketamine is marketed as an antidepressant in the United States;[9] and as an anesthetic in the European Union.[28]

Esketamine is a Schedule III controlled substance in the United States.[4]