Puldysa (idebenone), for the treatment of Duchenne muscular dystrophy

Idebenone is a member of the class of 1,4-benzoquinones which is substituted by methoxy groups at positions 2 and 3, by a methyl group at positions 5, and by a 10-hydroxydecyl group at positions 6. Initially developed for the treatment of Alzheimer’s disease, benefits were modest; it was subsequently found to be of benefit for the symptomatic treatment of Friedreich’s ataxia. It has a role as an antioxidant. It is a primary alcohol and a member of 1,4-benzoquinones.

Idebenone (pronounced eye-deb-eh-known, trade names Catena, Raxone, Sovrima, among others) is a drug that was initially developed by Takeda Pharmaceutical Company for the treatment of Alzheimer’s disease and other cognitive defects.[1] This has been met with limited success. The Swiss company Santhera Pharmaceuticals has started to investigate it for the treatment of neuromuscular diseases. In 2010, early clinical trials for the treatment of Friedreich’s ataxia[2] and Duchenne muscular dystrophy[3] have been completed. As of December 2013 the drug is not approved for these indications in North America or Europe. It is approved by the European Medicines Agency (EMA) for use in Leber’s hereditary optic neuropathy (LHON) and was designated an orphan drug in 2007.[4]

Chemically, idebenone is an organic compound of the quinone family. It is also promoted commercially as a synthetic analog of coenzyme Q10 (CoQ10).

Indications that are or were approved in some territories

Research on idebenone as a potential therapy of Alzheimer’s disease have been inconsistent, but there may be a trend for a slight benefit.[7][8] In May 1998, the approval for this indication was cancelled in Japan due to the lack of proven effects. In some European countries, the drug is available for the treatment of individual patients in special cases.[1]

Preliminary testing has been done in humans and found idebenone to be a safe treatment for Friedreich’s ataxia (FA), exhibiting a positive effect on cardiac hypertrophy and neurological function.[9] The latter was only significantly improved in young patients.[10] In a different experiment, a one-year test on eight patients, idebenone reduced the rate of deterioration of cardiac function, but without halting the progression of ataxia.[11]

The drug was approved for FA in Canada in 2008 under conditions including proof of efficacy in further clinical trials.[12] However, on February 27, 2013, Health Canada announced that idebenone would be voluntarily recalled as of April 30, 2013 by its Canadian manufacturer, Santhera Pharmaceuticals, due to the failure of the drug to show efficacy in the further clinical trials that were conducted.[13] In 2008, the European Medicines Agency (EMA) refused a marketing authorisation for this indication.[1] As of 2013 the drug was not approved for FA in Europe[14] nor in the US, where there is no approved treatment.[15]

Leber’s hereditary optic neuropathy (LHON) is a mitochondrially inherited (mother to all offspring) degeneration of retinal ganglion cells (RGCs) and their axons that leads to an acute or subacute loss of central vision; this affects predominantly young adult males. Santhera completed a Phase III clinical trial in this indication in Europe with positive results,[16] and submitted an application to market the drug to European regulators in July 2011.[17] It is approved by EMA for this indication and was designated an orphan drug in 2007.[4]

After experiments in mice[18] and preliminary studies in humans, idebenone has entered Phase II clinical trials in 2005[3] and Phase III trials in 2009.[19]

Phase I and II clinical trials for the treatment of MELAS (mitochondrial encephalomyopathy, lactic acidosis, and stroke-like episodes)[20] and primary progressive multiple sclerosis[21] are ongoing as of December 2013.

Idebenone is claimed to have properties similar to CoQ10 in its antioxidant properties, and has therefore been used in anti-aging on the basis of free-radical theory. Clinical evidence for this use is missing. It has been used in topical applications to treat wrinkles.[22]

In cellular and tissue models, idebenone acts as a transporter in the electron transport chain of mitochondria and thus increases the production of adenosine triphosphate (ATP) which is the main energy source for cells, and also inhibits lipoperoxide formation. Positive effects on the energy household of mitochondria has also been observed in animal models.[1][23] Clinical relevance of these findings has not been established.

Idebenone is well absorbed from the gut but undergoes excessive first pass metabolism in the liver, so that less than 1% reach the circulation. This rate can be improved with special formulations (suspensions) of idebenone and by administering it together with fat food; but even taking these measures bioavailability still seems to be considerably less than 14% in humans. More than 99% of the circulating drug are bound to plasma proteins. Idebenone metabolites include glucuronides and sulfates, which are mainly (~80%) excreted via the urine.[1] 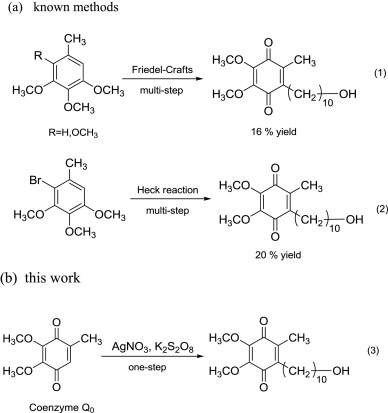 The palladium-catalyzed olefination of a sp2 or benzylic carbon attached to a (pseudo)halogen is known as the Heck reaction.2,63 It is a powerful tool, mainly used for the synthesis of vinylarenes, and it has also been employed for the construction of conjugated double bonds. The widespread application of this reaction can be illustrated by numerous examples in both academia small-scale64 and industrial syntheses.5 As an example, in 2011, a idebenone (124) total synthesis based on a Heck reaction was described (Scheme 35).65 This compound, initially designed for the treatment of Alzheimer’s and Parkinson’s diseases, presented a plethora of other interesting activities, such as free radical scavenging and action against some muscular illnesses. The key step in the synthesis was the coupling of 2-bromo-3,4,5-trimethoxy-1-methylbenzene (125) with dec-9-en-1-ol affording products 126. Under non-optimized conditions (Pd(OAc)2, PPh3, Et3N, 120 ºC), a mixture composed of 60% linear olefins 126 and 15% of the undesired branched product 127 was obtained after three days of reaction. Therefore, the conditions were optimized, allowing the preparation of 126 in 67% yield with no detection of 127 after only 30 min of reaction employing DMF, Pd(PPh3)4, iPr2NEt under microwave heating. To conclude the synthesis, the Heck adducts were submitted to hydroxyl protection/deprotection, hydrogenation, and ring oxidation. After these reactions, idebenone was obtained with 20% overall yield over 6 steps.

Scheme 35 Synthesis of idebenone (124) based on Heck reaction of 2-bromo-3,4,5-trimethoxy-1-methylbenzene with dec-9-en-1-ol under microwave irradiation.

An environmentally benign, convenient, high yielding, and cost-effective synthesis leading to idebenone is disclosed. The synthesis includes a bromination process for the preparation of 2-bromo-3,4,5-trimethoxy-1-methylbenzene, a protocol for the Heck cross-coupling reaction using either thermal or microwave heating, olefin reduction by palladium catalyzed hydrogenation, and a green oxidation protocol with hydrogen peroxide as oxidant to achieve the benzoquinone framework. The total synthesis is composed of six steps that provide an overall yield of 20% that corresponds to a step yield of 76%. 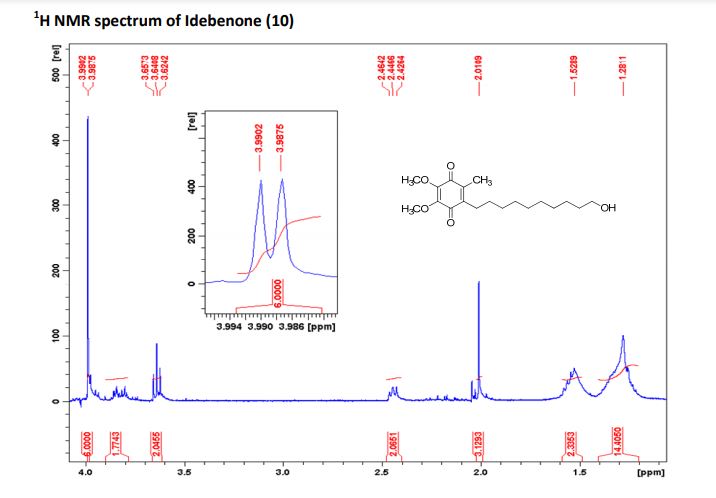 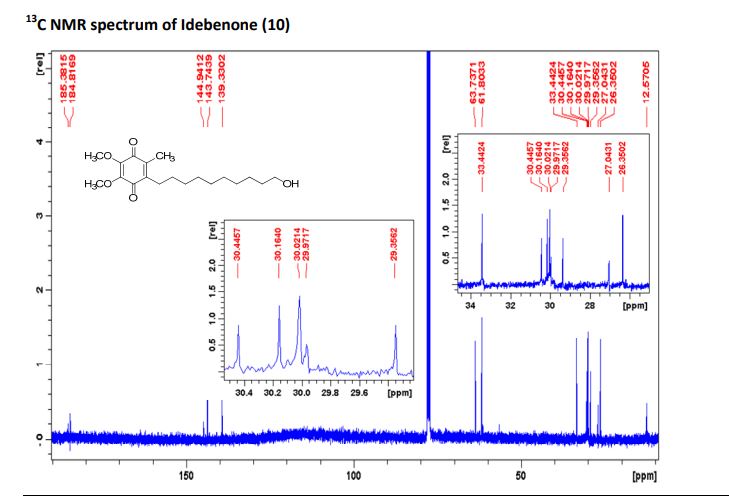 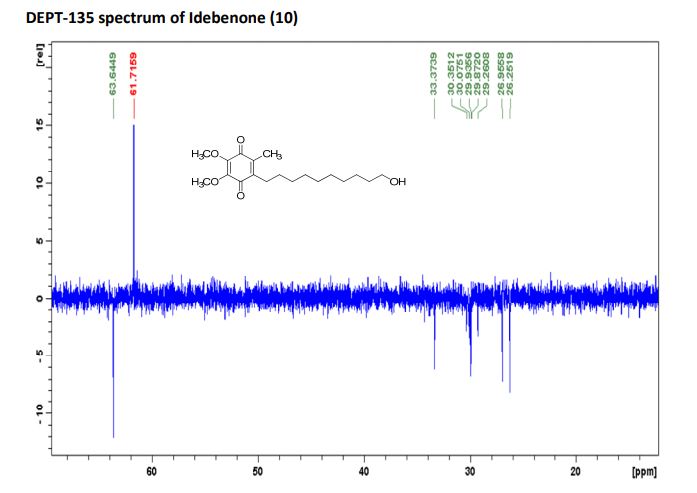 Analogues of mitoQ and idebenone were synthesized to define the structural elements that support oxygen consumption in the mitochondrial respiratory chain. Eight analogues were prepared and fully characterized, then evaluated for their ability to support oxygen consumption in the mitochondrial respiratory chain. While oxygen consumption was strongly inhibited by mitoQ analogues 2–4 in a chain length-dependent manner, modification of idebenone by replacement of the quinone methoxy groups by methyl groups (analogues 6–8) reduced, but did not eliminate, oxygen consumption. Idebenone analogues 6–8 also displayed significant cytoprotective properties toward cultured mammalian cells in which glutathione had been depleted by treatment with diethyl maleate.