Lansoprazole, sold under the brand name Selanz SR among others, is a medication which reduces stomach acid.[2] It is used to treat peptic ulcer disease, gastroesophageal reflux disease, and Zollinger–Ellison syndrome.[3] Effectiveness is similar to other proton pump inhibitors (PPIs).[4] It is taken by mouth.[2] Onset is over a few hours and effects last up to a couple of days.[2]

Common side effects include constipation, abdominal pain, and nausea.[2][5] Serious side effects may include osteoporosis, low blood magnesium, Clostridium difficile infection, and pneumonia.[2][5] Use in pregnancy and breastfeeding is of unclear safety.[1] It works by blocking H+/K+-ATPase in the parietal cells of the stomach.[2]

Lansoprazole was patented in 1984 and came into medical use in 1992.[6] It is available as a generic medication.[3] In 2017, it was the 188th most commonly prescribed medication in the United States, with more than three million prescriptions.[7][8]

Lansoprazole is used for treatment of:[5]

There is no good evidence that it works better than other PPIs.[4]

Side effects of PPIs in general[10] and lansoprazole in particular[11] may include:[5]

PPIs may be associated with a greater risk of hip fractures and Clostridium difficile-associated diarrhea.[5]: 22

Lansoprazole interacts with several other drugs, either due to its own nature or as a PPI.[15]

Lansoprazole possibly interacts with, among other drugs:

Lansoprazole , available in the name of Selanz SR, was originally synthesized at Takeda and was given the development name AG 1749.[19] Takeda patented it in 1984 and the drug launched in 1991.[20] In the United States, it was approved for medical use in 1995.[21]

The lansoprazole molecule is off-patent and so generic drugs are available under many brand names in many countries;[22] there are patents covering some formulations in effect as of 2015.[23] Patent protection expired on 10 November 2009.[24][25]

Since 2009, lansoprazole has been available over the counter (OTC) in the U.S. as Prevacid 24HR[26][27] and as Lansoprazole 24HR.[28] In Australia, it is marketed by Pfizer as Zoton.[citation needed]

In vitro experiments have shown that lansoprazole binds to the pathogenic form of tau protein.[29] As of 2015 laboratory studies were underway on analogs of lansoprazole to explore their use as potential PET imaging agents for diagnosing tauopathies including Alzheimer’s disease.[29]

ii. The compound so formed is treated with acetic anhydride in acidic conditions followed by nutrilizing with sodium hydroxide solution to get 2-hydroxymethyl-3-methyl-4-(2,2,2-trifluoroethoxy)-pyridine

iii. Last is treated with thionyl chloride followed by reaction with 2-mercaptobenzimidazole to get 2-[3-methyl-4-(2,2,2-trifluoroethoxy)pyrid-2-ylmethylthio]benzimidazole.

iv. Above formed compound is reacted with m-chloro-perbenzoic acid to get lansoprazole.[2] 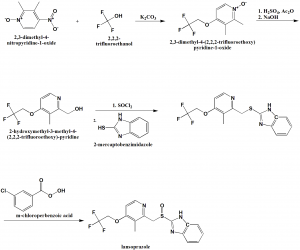 Lansoprazole (37.3) is the second approved gastric acid pump inhibitor. The common approach for the synthesis of lansoprazole involves coupling of mercapto-benzimidazole (37.24) with a new 2-chloromethylpyridine derivative (37.32) followed by oxidation of the prochiral sulfide group with m-chloroperbenzoic acid or hydrogen peroxide was first disclosed by Nohara and Maki [73], with followed improvements in patents [74-78] and briefly summed up in papers [79-80].

Lansoprazole synthesis is represented on the Scheme 37.4.

In principle it repeats the synthesis Scheme of omeprazole, differing in details and characteristics, for example, in place of 2,3,5-collidine (37.15) as a starting material, 2,3-lutidine (37.27) was selected, and the methoxy group in the fourth position of pyridine ring was replaced by the 2,2,2-trifluoroethoxy group.

Another interesting approach has been demonstrated [81]. In this case, 2-chloromethyl-3-methyl-4-(2,2,2-trifluoroethoxy)pyridine (37.32) was prepared starting with 3-picoline (37.34), which was oxidized using peracids (i.e., m-chloroperoxybenzoic acid) to produce 3-methylpyridineN-oxide (37.35). The obtained product was nitrated with fuming nitric acid to produce 3-methyl-4-nitropyridine N-oxide (37.36). The prepared N-oxide was treated with dimethylsulfate at 65 to 70°C to form N-methoxypyridinium salt (37.37), the aqueous solution of which on cooling was treated with sodium cyanide to produce an after formation of intermediate (37.38) and elimination of methanol 2-cyano-3-methyl-4-nitropyridine (37.39). This method for the synthesis of 2-cyanopyridines via addition of cyanide ion to N-alkoxy-quaternary salts of pyridines, supplements the plethora of Reissert-Kaufmann reactions in the quinoline and isoquinoline series previously described [82]. The nitro group in (37.39) was replaced by the 2,2,2-trifluoroethoxy group by a direct reaction with sodium trifluoroethoxide in trifluoroethanol that produced ether (37.40). The next step—transformation of nitrile group in prepared 2-cyanopyridine (37.40) to 2-carboxypyridine (37.41)—was carried out in a one-pot procedure by heating the 2-cyano compound in the presence of concentrated sulfuric acid followed by reaction of the intermediate amide with sodium nitrite under aqueous acidic conditions [83,84]. The obtained acid was esterified in methanol with a catalytic amount of sulfuric acid to produce ester (37.42). The ester (37.42) was reduced by NaBH4, producing the above-described 2-hydroxymethyl- pyridine derivative (37.31) followed by a reaction with thionyl chloride in dioxane that produced the required 2-chloromethylpyridine compound (37.32). Direct reaction of the last with 2-mercaptobenzimidazole (37.34) in methanol, even without use of any base, produced a sulfide (37.33) in high yield. The oxidation of the last to lansoprazole (37.3) has been carried out by various oxidants and catalysts, which, together with the desired sulfoxide, produced a certain amount of overoxidized product. Oxidizing sulfide (37.33) with a new oxidation method made up of the use of the composite metal oxide catalyst, LiNbMoO6, in methanol and 35% H2O2 as an oxidant sulfide (37.33) was successfully oxidized to desired lansoprazole (37.3) (Scheme 37.5.).

Lansoprazole is the second inhibitor of the gastric H+/K+-ATPase to be marketed for the treatment of peptic ulcer disease and reflux esophagitis, erosive esophagitis, and Zollinger-Ellison syndrome. It is an inhibitor of gastric acid secretion and also exhibits antibacterial activity against H. pylori in vitro. More common side effects of lansoprazole are diarrhea and skin rash or itching. Less-common side effects are abdominal pain, joint pain, nausea, vomiting, and increased or decreased appetite [85-91]. 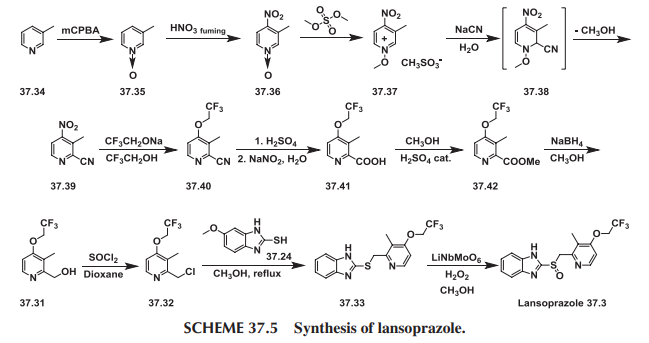 Similar to the synthesis of the chiral sulfoxide of armodafinil vide supra, the preparation of the chiral sulfoxide of lansoprazole utilized the catalytic oxidation method developed by Kagan and co-workers (the Scheme). Two routes have been reported that describe the preparation of dexlansoprazole on large scale. The first route developed by Takeda reacts commercially available thioether 29, also used to make lansoprazole, under the Kagan asymmetric oxidation conditions and the alternative route utilizes the cheaper commercial intermediate nitrosulfide 30 in the analogous asymmetric oxidation by Kagan). Thus, the catalyst complex consisting of (+)-DET, Ti(OiPr)4 and water was formed in the presence of thioether 29 in toluene at 30–40°C. The reaction mixture was then cooled to 5 °C and DIPEA and cumene hydroperoxide (CMHP) were added to give, after aqueous work-up and in situ crystallization from the organic layer, dexlansoprazole (VI) in 98% ee. No yield was given in the patent. An alternate, but similar, sequence was also described wherein the nitrosulfide intermediate 30 was subjected to similar oxidative conditions that gave intermediate nitro compound 31 in 80% yield and 98% ee. Compound 31 was treated with KOH and trifluoroethanol to provide dexlansoprazole (VI). 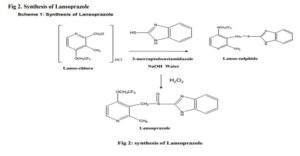 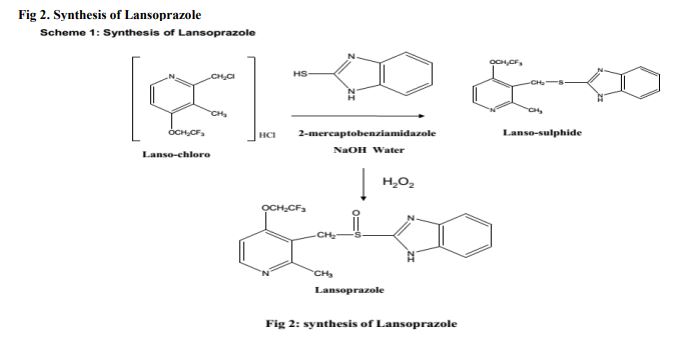