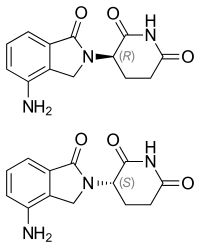 Lenalidomide was first approved by the U.S. Food and Drug Administration (FDA) on Dec 27, 2005, then approved by European Medicine Agency (EMA) on June 14, 2007, and approved by Pharmaceuticals and Medical Devices Agency of Japan (PMDA) on June 25, 2010. It was developed and marketed as Revlimid® by Celgene.

Lenalidomide is an analogue of thalidomide with immunomodulatory, antiangiogenic, and antineoplastic properties. In multiple myeloma cells, the combination of lenalidomide and dexamethasone synergizes the inhibition of cell proliferation and the induction of apoptosis. Revlimid® is indicated for the treatment of multiple myeloma (MM), in combination with dexamethasone, in patients who have received at least one prior therapy, transfusion-dependent anemia due to low-or intermediate-1-risk myelodysplastic syndromes (MDS) associated with a deletion 5q abnormality with or without additional cytogenetic abnormalities and mantle cell lymphoma (MCL) whose disease has relapsed or progressed after two prior therapies, one of which included bortezomib.

Lenalidomide, sold under the trade name Revlimid among others, is a medication used to treat multiple myeloma (MM) and myelodysplastic syndromes (MDS).[2] For MM it is used after at least one other treatment and generally together with dexamethasone.[2] It is taken by mouth.[2]

Common side effects include diarrhea, itchiness, joint pain, fever, headache, and trouble sleeping.[2] Severe side effects may include low blood platelets, low white blood cells, and blood clots.[2] Use during pregnancy may harm the baby.[2] The dose may need to be adjusted in people with kidney problems.[2] It has a chemical structure similar to thalidomide but has a different mechanism of action.[3][2] How it works is not entirely clear as of 2019.[2]

Lenalidomide was approved for medical use in the United States in 2005.[2] It is on the World Health Organization’s List of Essential Medicines.[4]

Lenalidomide is used to treat multiple myeloma.[5] It is a more potent molecular analog of thalidomide, which inhibits tumor angiogenesis, tumor-secreted cytokines, and tumor proliferation through induction of apoptosis.[6][7][8]

Lenalidomide is effective at inducing a complete or “very good partial” response and improves progression-free survival. Adverse events more common in people receiving lenalidomide for myeloma include neutropenia, deep vein thrombosis, infections, and an increased risk of other hematological malignancies.[9] The risk of second primary hematological malignancies does not outweigh the benefit of using lenalidomide in relapsed or refractory multiple myeloma.[10] It may be more difficult to mobilize stem cells for autograft in people who have received lenalidomide.[6]

In 2006, lenalidomide received U.S. Food and Drug Administration (FDA) clearance for use in combination with dexamethasone in people with multiple myeloma who have received at least one prior therapy.[11] In 2017, the FDA approved lenalidomide as standalone maintenance therapy (without dexamethasone) for people with multiple myeloma following autologous stem cell transplant.[12]

In 2009, The National Institute for Health and Clinical Excellence issued a final appraisal determination approving lenalidomide in combination with dexamethasone as an option to treat people with multiple myeloma who have received two or more prior therapies in England and Wales.[13]

Lenalidomide is approved by FDA as a specialty drug requiring a specialty pharmacy distribution for mantle cell lymphoma in patients whose disease has relapsed or progressed after at least two prior therapies, one of which must have included the medicine bortezomib.[3]

Although not specifically approved by the FDA for use in treating amyloidosis, Lenalidomide is widely used in the treatment of that condition, often in combination with dexamethasone. [19]

Lenalidomide is related to thalidomide, which is known to be teratogenic. Tests in monkeys suggest that lenalidomide is likewise teratogenic.[21] It cannot be prescribed for women who are pregnant or who may become pregnant during therapy.[1] For this reason, the drug is only available in the United States through a restricted distribution system in conjunction with a risk evaluation and mitigation strategy. Females who may become pregnant must use at least two forms of reliable contraception during treatment and for at least four weeks after discontinuing treatment with lenalidomide.[3][22]

Lenalidomide, like its parent compound thalidomide, may cause venous thromboembolism (VTE), a potentially serious complication with their use. High rates of VTE have been found in patients with multiple myeloma who received thalidomide or lenalidomide in conjunction with dexamethasone, melphalan, or doxorubicin.[23]

In March 2008, the U.S. Food and Drug Administration (FDA) included lenalidomide on a list of twenty prescription drugs under investigation for potential safety problems. The drug was investigated for possibly increasing the risk of developing Stevens–Johnson syndrome, a life-threatening skin condition.[24]

In 2011, the FDA initiated an ongoing review of clinical trials that found an increased risk of developing cancers such as acute myelogenous leukemia and B-cell lymphoma,[25] though it did not advise patients to discontinue treatment with lenalidomide.[26]

Lenalidomide has been used to successfully treat both inflammatory disorders and cancers in the past ten years.[when?] There are multiple mechanisms of action, and they can be simplified by organizing them as mechanisms of action in vitro and in vivo.[27] In vitro, lenalidomide has three main activities: direct anti-tumor effect, inhibition of angiogenesis, and immunomodulation. In vivo, lenalidomide induces tumor cell apoptosis directly and indirectly by inhibition of bone marrow stromal cell support, by anti-angiogenic and anti-osteoclastogenic effects, and by immunomodulatory activity. Lenalidomide has a broad range of activities that can be exploited to treat many hematologic and solid cancers.

On a molecular level, lenalidomide has been shown to interact with the ubiquitin E3 ligase cereblon[28] and target this enzyme to degrade the Ikaros transcription factors IKZF1 and IKZF3.[29] This mechanism was unexpected as it suggests that the major action of lenalidomide is to re-target the activity of an enzyme rather than block the activity of an enzyme or signaling process, and thereby represents a novel mode of drug action. A more specific implication of this mechanism is that the teratogenic and anti-neoplastic properties of lenalidomide, and perhaps other thalidomide derivatives, could be disassociated.

Lenalidomide was approved for medical use in the United States in 2005.[2]

Lenalidomide is undergoing clinical trial as a treatment for Hodgkin’s lymphoma,[32] as well as non-Hodgkin’s lymphoma, chronic lymphocytic leukemia and solid tumor cancers, such as carcinoma of the pancreas.[33] One Phase III clinical trial being conducted by Celgene in elderly patients with B-cell chronic lymphocytic leukemia was halted in July 2013, when a disproportionate number of cancer deaths were observed during treatment with lenalidomide versus patients treated with chlorambucil.[34]

SCALABLE AND GREEN PROCESS FOR THE SYNTHESIS OF ANTICANCER DRUG LENALIDOMIDE 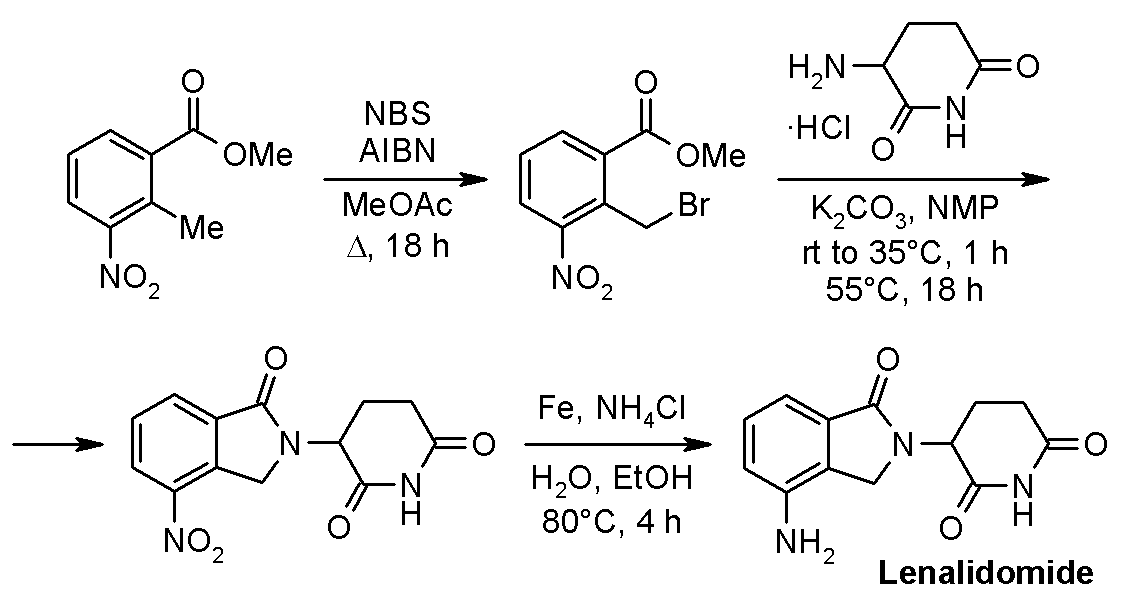 A new process for the synthesis of anticancer drug lenalidomide was developed, using platinum group metal-free and efficient reduction of nitro group with the iron powder and ammonium chloride. It was found that the bromination of the key raw material, methyl 2-methyl-3-nitrobenzoate, could be carried out in chlorine-free solvent methyl acetate without forming significant amounts of hazardous by-products. We also have compared the known synthetic methods for cyclization of methyl 2-(bromomethyl)-3-nitrobenzoate and 3-aminopiperidinedione to form lenalidomide nitro precursor.

A new process for the synthesis of anticancer drug lenalidomide was developed, using platinum group metal-free and efficient reduction of nitro group with the iron powder and ammonium chloride. It was found that the bromination of the key raw material, methyl 2-methyl-3-nitrobenzoate, could be carried out in chlorine-free solvent methyl acetate without forming significant amounts of hazardous by-products. We also have compared the known synthetic methods for cyclization of methyl 2-(bromomethyl)-3-nitrobenzoate and 3-aminopiperidinedione to form lenalidomide nitro precursor.

Cyclization of N-(benzyloxycarbonyl)glutamine (I) by means of CDI in refluxing THF gives 3-(benzyloxycarbonylamino)piperidine-2,6-dione (II), which is deprotected with H2 over Pd/C in ethyl acetate/4N HCl to yield 3-aminopiperidine-2,6-dione hydrochloride (III). Bromination of 2-methyl-3-nitrobenzoic acid methyl ester (IV) with NBS in CCl4 provides 2-(bromomethyl)-3-nitrobenzoic acid methyl ester (V), which is cyclized with the aminopiperidine (III) by means of triethylamine in hot DMF to afford 3-(4-nitro-1-oxoisoindolin-2-yl)piperidine-2,6-dione (VI). Finally, the nitro group of compound (VI) is reduced with H2 over Pd/C in methanol (1, 2).

Treatment of 3-nitrophthalimide (I) with ethyl chloroformate and triethylamine produced 3-nitro-N-(ethoxycarbonyl)phthalimide (II), which was condensed with L-glutamine tert-butyl ester hydrochloride (III) to afford the phthaloyl glutamine derivative (IV). Acidic cleavage of the tert-butyl ester of (IV) provided the corresponding carboxylic acid (V). This was cyclized to the required glutarimide (VI) upon treatment with thionyl chloride and then with triethylamine. The nitro group of (VI) was finally reduced to amine by hydrogenation over Pd/C.