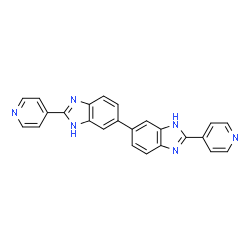 Summit Therapeutics (formerly Summit Corp ) is developing ridinilazole the lead compound from oral narrow-spectrum, GI-restricted antibiotics, which also include SMT-21829, for the treatment of Clostridium difficile infection and prevention of recurrent disease.

Ridinilazole (previously known as SMT19969) is an investigational small molecule antibiotic being evaluated for oral administration to treat Clostridioides difficile infection (CDI). In vitro, it is bactericidal against C. difficile and suppresses bacterial toxin production; the mechanism of action is thought to involve inhibition of cell division.[1] It has properties which are desirable for the treatment of CDI, namely that it is a narrow-spectrum antibiotic which exhibits activity against C. difficile while having little impact on other normal intestinal flora and that it is only minimally absorbed systemically after oral administration.[2] At the time ridinilazole was developed, there were only three antibiotics in use for treating CDI: vancomycin, fidaxomicin, and metronidazole.[1][2] The recurrence rate of CDI is high, which has spurred research into other treatment options with the aim to reduce the rate of recurrence.[3][4]

As of 2019, two phase II trials have been completed and two phase III trials comparing ridinilazole to vancomycin for CDI are expected to be completed in September 2021.[2][5][6] Ridinilazole was designated as a Qualified Infectious Disease Product (QIDP) and was granted Fast Track status by the U.S. FDA.[2] Fast Track status is reserved for drugs designed to treat diseases where there is currently a gap in the treatment, or a complete lack thereof.[7] The QIDP designation adds five more years of exclusivity for ridinazole upon approval.[8] 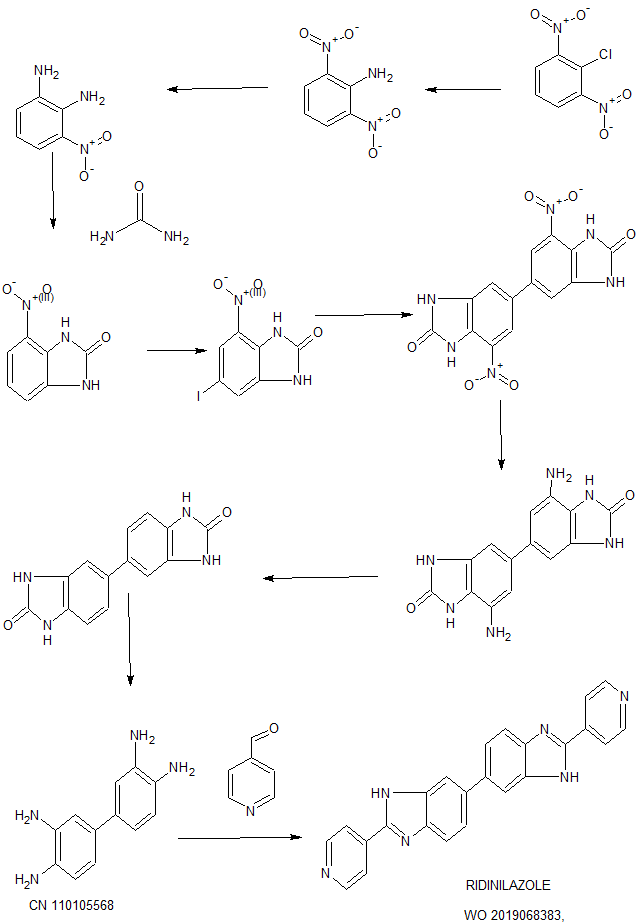 Process for preparing ridinilazole useful for treating Clostridium difficile infection. Also claimed is the crystalline form of a compound.

The present invention relates to processes for the preparation of 2,2′-di(pyridin-4-yl)-1/-/,T/-/-5,5′-bibenzo[d]imidazole (which may also be known as 5,5’-bis[2-(4-pyridinyl)-1/-/-benzimidazole], 2,2′-bis(4-pyridyl)-3/-/,3’/-/-5,5′-bibenzimidazole or 2-pyridin-4-yl-6-(2-pyridin-4-yl-3/-/-benzimidazol-5-yl)-1/-/-benzimidazole), referenced herein by the INN name ridinilazole, and pharmaceutically acceptable derivatives, salts, hydrates, solvates, complexes, bioisosteres, metabolites or prodrugs thereof. The invention also relates to various crystalline forms of ridinilazole, to processes for their preparation and to related pharmaceutical preparations and uses thereof (including their medical use and their use in the efficient large-scale synthesis of ridinilazole).

WO2010/063996 describes various benzimidazoles, including ridinilazole, and their use as antibacterials (including in the treatment of CDAD).

WO 2011/151621 describes various benzimidazoles and their use as antibacterials

(including in the treatment of CDAD).

triarylamidines as broad-spectrum antibiotics, disclosing activity against both Gram negative and Gram-positive bacteria, including Staphylococcus spp., Enterococcus spp. and Clostridioides spp. However, this document does not disclose compounds of formula (I) as described herein.

Chaudhuri et al. (2007) J.Org. Chem. 72, 1912-1923 describe various bis-2-(pyridyl)-1 H-benzimidazoles (including compounds of formula I as described herein) as DNA binding agents. This document is silent as to potential antibacterial activity.

WO2019/068383 describes the synthesis of ridinilazole by metal-ion catalyzed coupling of 3,4,3’,4’-tetraaminobiphenyl with 4-pyridinecarboxaldehyde in the presence of oxygen, followed by the addition of a complexing agent.

WO2006076009, WO2004041209 and Bowser et al. (Bioorg. Med. Chem. Lett., 2007, 17, 5652-5655) disclose various substituted benzimidazole compounds useful as anti-infectives that decrease resistance, virulence, or growth of microbes. The compounds are said not to exhibit intrinsic antimicrobial activity in vitro.

US 2007/0112048 A1 discloses various bi- and triarylimidazolidines and bi- and triarylamidines as broad-spectrum antibiotics, disclosing activity against both Gram-negative and Gram-positive bacteria, including Staphylococcus spp., Enterococcus spp.

and Clostridium spp. However, this document does not disclose compounds of general formula (I) as described herein.

Chaudhuri et al. (J.Org. Chem., 2007, 72, 1912-1923) describe various bis-2-(pyridyl)-1 H-benzimidazoles (including compounds of formula I as described herein) as DNA binding agents. This document is silent as to potential antibacterial activity.

Studies of double‐stranded‐DNA binding have been performed with three isomeric bis(2‐(n‐pyridyl)‐1H‐benzimidazole)s (n=2, 3, 4). Like the well‐known Hoechst 33258, which is a bisbenzimidazole compound, these three isomers bind to the minor groove of duplex DNA. DNA binding by the three isomers was investigated in the presence of the divalent metal ions Mg2+, Co2+, Ni2+, Cu2+, and Zn2+. Ligand–DNA interactions were probed with fluorescence and circular dichroism spectroscopy. These studies revealed that the binding of the 2‐pyridyl derivative to DNA is dramatically reduced in the presence of Co2+, Ni2+, and Cu2+ ions and is abolished completely at a ligand/metal‐cation ratio of 1:1. Control experiments done with the isomeric 3‐ and 4‐pyridyl derivatives showed that their binding to DNA is unaffected by the aforementioned transition‐metal ions. The ability of 2‐(2‐pyridyl)benzimidazole to chelate metal ions and the conformational changes of the ligand associated with ion chelation probably led to such unusual binding results for the ortho isomer. The addition of ethylenediaminetetraacetic acid (EDTA) reversed the effects completely.

Three symmetrical positional isomers of bis-2-(n-pyridyl)-1H-benzimidazoles (n = 2, 3, 4) were synthesized and DNA binding studies were performed with these isomeric derivatives. Like bisbenzimidazole compound Hoechst 33258, these molecules also demonstrate AT-specific DNA binding. The binding affinities of 3-pyridine (m-pyben) and 4-pyridine (p-pyben) derivatized bisbenzimidazoles to double-stranded DNA were significantly higher compared to 2–pyridine derivatized benzimidazole o-pyben. This has been established by combined experimental results of isothermal fluorescence titration, circular dichroism, and thermal denaturation of DNA. To rationalize the origin of their differential binding characteristics with double-stranded DNA, computational structural analyses of the uncomplexed ligands were performed using ab initio/Density Functional Theory. The molecular conformations of the symmetric head-to-head bisbenzimidazoles have been computed. The existence of intramolecular hydrogen bonding was established in o-pyben, which confers a conformational rigidity to the molecule about the bond connecting the pyridine and benzimidazole units. This might cause reduction in its binding affinity to double-stranded DNA compared to its para and meta counterparts. Additionally, the predicted stable conformations for p-, m-, and o-pyben at the B3LYP/6-31G* and RHF/6-31G* levels were further supported by experimental pKa determination. The results provide important information on the molecular recognition process of such symmetric head to head bisbenzimidazoles toward duplex DNA.

Clostridium difficile infection (CDI) is the leading cause of infectious healthcare-associated diarrhoea. CDI remains a challenge to treat clinically, because of a limited number of antibiotics available and unacceptably high recurrence rates. Because of this, there has been significant demand for creating innovative therapeutics, which has resulted in the development of several novel antibiotics.

Ridinilazole (SMT19969) is the INN name of 5,5’bis[2-(4-pyridinyl)-lH-benzimidazole], which is a promising non-absorbable small molecule antibiotic intended for oral use in the treatment of CDI. It has been shown to exhibit a prolonged post-antibiotic effect and treatment with ridinilazole has resulted in decreased toxin production. A phase 1 trial demonstrated that oral ridinilazole is well tolerated and specifically targets Clostridia whilst sparing other faecal bacteria.

Ridinilazole has the following chemical structure:

Bhattacharya & Chaudhuri (Chem. Asian J., 2007, No. 2, 648-655) report performing double-stranded DNA binding with three benzimidazole derivatives, including ridinilazole. The compounds have been prepared by dissolving the reactants in nitrobenzene, heating at 120°C for 8- 1 Oh and purifying the products by column chromatography over silica gel. The compounds were obtained in 65-70% yield. Singh et al., (Synthesis, 2000, No. 10, 1380-1390) describe a catalytic redox cycling approach based on Fe(III) and molecular oxygen as co-oxidant for providing access to benzimidazole and

imidazopyridine derivatives, such as ridinilazole. The reaction is performed at high temperatures of 120°C and the product is isolated in 91% yield by using silica flash chromatography.

Both processes are not optimal, for example in terms of yield, ease of handling and scalability. Thus, there is a need in the art for an efficient and scalable preparation of ridinilazole, which overcomes the problems of the prior art processes.

A solution of 3,4,3′,4′-tetraaminobiphenyl (3.28 g, 15.3 mmol) and isonicotinaldehyde (3.21 g, 30.0 mmol) in DMF (40 mL) was stirred at 23 °C for one hour. Then anhydrous ferric chloride (146 mg, 0.90 mmol), water (0.10 mL, 5.4 mmol) and additional DMF (2 mL) were added and fresh air was bubbled into the solution during vigorous stirring for 5 hours at room temperature. Next, water (80 mL) and EDTA (0.29 g) were added resulting in a brownish suspension, which was stirred overnight. The product was isolated by filtration, washed with water, and dried in a desiccator in vacuo as a brown powder (5.56 g; 95%). The addition of EDTA had held iron in solution and the crude ridinilazole contained significantly lower amounts of iron than comparative example 1.

To a suspension von ridinilazole tritosylate (1 10 mg, 0.12 mmol) in water (35 mL) featuring a pH value of about 4.5 stirring at 70 °C sodium bicarbonate (580 mg, 6.9 mmol) were added and caused a change of color from orange to slightly tan. The mixture, now at a pH of about 8.5, was cooled down to room temperature and the solids were separated by filtration, washed with water (1 ML) and dried in vacuo providing 40 mg (85%) essentially pure ridinilazole as a brownish powder.

The sharp peaks in the ¾ NMR indicated that iron had been efficiently removed.