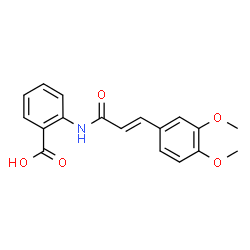 Tranilast (INN, brand name Rizaben) is an antiallergic drug. It was developed by Kissei Pharmaceuticals and was approved in 1982 for use in Japan and South Korea for bronchial asthma. Indications for keloid and hypertrophic scar were added in the 1980s.

Kissei  has developed and launched tranilast in Japan and South Korea for the treatment of allergic rhinitis, asthma and atopic dermatitis. Kissei, in collaboration with  GlaxoSmithKline  was additionally developing tranilast for the prevention of restenosis following percutaneous transluminal coronary angioplasty.

It is used Japan, South Korea, and China to treat asthma, keloid scars, and hypertrophic scars, and as an ophthalmic solution for allergic pink eye.[1]

It should not be taken women who are or might become pregnant, and it is secreted in breast milk.[1]

People who are taking warfarin should not also take tranilast, as they interact.[1] It appears to inhibit UGT1A1 so will interfere with metabolism of drugs that are affected by that enzyme.[1]

When given systemically, tranilast appears to cause liver damage; in a large well-conducted clinical trial it caused elevated transaminases three times the upper limit of normal in 11 percent of patients, as well as anemia, kidney failure, rash, and problems urinating.[1]

In 2016 the FDA proposed that tranilast be excluded from the list of active pharmaceutical ingredients that compounding pharmacies in the US could formulate with a prescription.[1]

It appears to work by inhibiting the release of histamine from mast cells; it has been found to inhibit proliferation of fibroblasts but its biological target is not known.[3] It has been shown to inhibit the release of many cytokines in various cell types, in in vitro studies.[3] It has also been shown to inhibit NALP3 inflammasome activation and is being studied as a treatment for NALP3-driven inflammatory diseases.[4]

Tranilast is an analog of a metabolite of tryptophan, and its chemical name is 3′,4′-dimethoxycinnamoyl) anthranilic acid (N-5′).[3]

After promising results in three small clinical trials, tranilast was studied in a major clinical trial (the PRESTO trial) by SmithKline Beecham in partnership with Kissei for prevention of restenosis after percutaneous transluminal coronary revascularization,[5] but was not found effective for that application.[1][6]

As of 2016, Altacor was developing a formulation of tranilast to prevent of scarring following glaucoma surgery and had obtained an orphan designation from the EMA for this use.[7][8]

It was developed by Kissei and first approved in Japan and South Korea for asthma in 1982, and approved uses for keloid and hypertrophic scars were added later in the 1980s.[3]

tranilast product case US03940422 , expired in all the regional territories.

Tranilast, (2-[[3-(3,4-dimethoxyphenyl)-l-oxo-2-propenyl]amino] benzoic acid, shown below), was originally developed as an anti-allergy drug due to its ability to inhibit the release of inflammatory mediators, such as histamine, from mast cells and basophils (P. Zampini. IntJ Immunopharmacol. 1983;

Tranilast has been marketed in Japan, China and South Korea by Kissei Pharmaceutical Co. Ltd, for allergic conditions such as allergic conjunctivitis, bronchial asthma, allergic rhinitis and atopic dermatitis, under the Rizaben® brand name for more than thirty years. More recently tranilast has also been shown to have anti-proliferative properties. Tranilast was shown to inhibit the proliferation of fibroblasts and suppress collagen synthesis (M. Isaji. Biochem Pharmacol. 1987; 36: 469-474) and also to inhibit the transformation of fibroblasts to myofibroblasts and their subsequent contraction (M. Isaji. Life Sci. 1994; 55: 287-292). This additional behaviour led to tranilast gaining additional approval for the treatment of keloids and hypertrophic scars.

[004] Over recent years many researchers have explored the anti-proliferative effects of tranilast to assess its potential in fibrotic and cancerous conditions. Its anti-proliferative action is believed to be due to its ability to inhibit transforming growth factor beta (TGF-b) (H. Suzawa. Jpn J Pharmacol. 1992 Oct; 60(2): 91-96). Fibrosis is a condition that can affect most organs of the body and fibroblast proliferation, differentiation and collagen synthesis are known to be key factors in the progression of most types of fibrosis. Tranilast has been shown in-vivo to have potential beneficial effects in

[006] Given the wide range of fibrotic conditions and cancers for which tranilast could have a potential therapeutic benefit, as well as the different patient types and specific areas of the body requiring treatment, it is anticipated that patients would benefit from having multiple delivery methods for the administration of tranilast so as to best suit the patient’s needs. The pharmaceutical compositions could include, for example, a solid oral dosage, a liquid oral dosage, an injectable composition, an inhalable composition, a topical composition or a transdermal composition.

[007] Kissei Pharmaceutical Co. Ltd explored the anti-proliferative effect of tranilast in the prevention of restenosis associated with coronary intervention. In a Phase II clinical study Kissei found that the current approved dose of tranilast (300 mg/day) was insufficient to prevent restenosis and that a higher dose of 600 mg/day was needed to achieve a decrease in restenosis rates (H. Tamai, Am Heart J.1999; 138(5): 968-75). However, it was found that a 600 mg daily dosage can result in a ten-fold inter-patient variation in plasma concentrations of the drug (30-300 pmol/L) (H Kusa ma. Atherosclerosis. 1999; 143: 307-313) and in the Phase III study of tranilast for the prevention of restenosis the dose was further increased to 900mg daily (D Holmes, Circulation. 2002; 106(10): 1243-1250).

[008] The marketed oral form of tranilast (Rizaben®) contains tranilast in its pure crystalline form. Crystalline tranilast has extremely low aqueous solubility (solubility of 14.5 pg/ml in water and 0.7 pg/ml in pH 1.2 buffer solution (Society of Japanese Pharmacopoeia. 2002)). Whilst, high energy amorphous forms are often used as a means of improving the solubility of poorly soluble drug

compounds, literature shows that an amorphous form of tranilast is not completely photostable in the solid state and that it undergoes photodegradation on storage when exposed to light (S. Onoue. EurJ Pharm Sci. 2010; 39: 256-262).

[009] It is expected that the very low solubility of tranilast is a limiting factor in the oral bioavailability of the drug. Given the limited time any drug has to firstly dissolve in the

gastrointestinal tract and then be absorbed into the bloodstream, this issue will become even more limiting as the oral dose of tranilast is increased. The poor solubility of tranilast is also possibly a key factor in the high inter-patient variability reported for higher dose tranilast pharmacokinetics. As a BCS class II drug (low solubility/high permeability) it is expected that absorption from the gastrointestinal tract is hampered by the dissolution rate of the drug in gastrointestinal media as well as its overall solubility. For treatment of chronic proliferative diseases such as fibrosis and cancer it is vital for the delivery method of a drug to produce consistent, predictable plasma levels that are maintained above the minimum effective concentration. To achieve efficacious oral delivery of tranilast at higher doses there is a need for new solid forms of the drug with both high solubility and rapid dissolution rates.

[010] Given the severity of conditions involving cancer or fibrosis there is also a need for systemic treatment options by which tranilast can be delivered by healthcare specialists that do not require the patient to swallow solid oral dosage forms. Alternative dosage forms suitable for these needs could include, for example, injectable compositions, liquid oral formulations or nebulized inhaled formulations. These would require a liquid formulation of tranilast suitable for systemic delivery. [Oil] Given the potential of tranilast to treat ocular diseases, such as allergic conjunctivitis, Kissei Pharmaceutical Co. Ltd recognised the need to develop an eye drop formulation of tranilast for localised treatment. However, as well as having very low aqueous solubility, tranilast is also photochemically unstable when stored in solution, resulting in significant degradation (N Hori, Chem. Pharm. Bull. 1999; 47(12): 1713-1716). Therefore, the only way Kissei were able to achieve an eye drop liquid composition of tranilast was to use both solubilising and stabilising agents in the formulation (US Patent 5356620). The resulting 0.5% (w/v) eye drop formulation is currently also marketed under the Rizaben® brand name. However, the focus of this formulation and of the subsequent research that has attempted to produce alternative solution formulations of tranilast has always been solely on external delivery of tranilast using compositions such as eye drops and skin ointments etc. None of the liquid formulations of tranilast previously described have been produced for systemic delivery such as for oral or IV delivery. Excipients used in the previously reported external preparations are not suitable for systemic delivery. Also, despite the successful

development of an eye drop formulation of tranilast, the package insert of the marketed Rizaben® eye drops states that the product should not be stored in a refrigerator as crystals may precipitate.

[012] Thus, there remains a need for aqueous pharmaceutical compositions of tranilast suitable for systemic delivery. Given the potential photochemical degradation issue of long term storage of tranilast in solution and also the disadvantage of the larger storage facilities needed to store bulkier solution based formulations it would also be advantageous to develop a stable highly soluble solid form of tranilast that can be quickly dissolved at the time of treatment by the patient or healthcare provider to produce the required liquid formulation.

[013] Following efforts to make a liquid formulation of tranilast, Kissei made the statement that tranilast and pharmaceutically acceptable salts thereof are too insoluble in water to prepare an aqueous solution (US Patent 5356620). Since that US patent the only crystalline pharmaceutically acceptable salt to have been published is the sodium salt (N Geng, Cryst. Growth Des. 2013; 13: 3546-3553). In line with the findings of Kissei the authors of this paper stated that the apparent solubility of the crystalline tranilast sodium salt is even less than that of pure tranilast. Also, when they performed a dissolution study of tranilast in a sodium containing media they found that as the tranilast dissolved it gradually precipitated out of solution as its sodium salt indicating that the sodium salt has a lower thermodynamic solubility than the pure drug. The authors of this paper also successfully prepared the non-pharmaceutically acceptable crystalline cytosine salt of tranilast. Despite this crystalline cytosine salt showing approximately a two-fold solubility improvement over pure crystalline tranilast, not only would this crystalline cytosine salt not be suitable for systemic delivery to a patient due to cytosine not having FDA acceptability but this improvement in solubility would not be great enough to produce high dose tranilast liquid formulations such as an injectable formulation.

[014] Patent application EP1946753 discloses an attempt to prepare an external preparation of tranilast and claims the preparation of ionic liquid salts of tranilast with organic amines. The inventors claim that blending tranilast with the organic amine results in a liquid form. This application does not disclose the formation of any solid state, crystalline tranilast salts with organic amines. They demonstrate that these ionic liquid forms of tranilast have higher solubility in solvents suitable for external application to the skin and that these preparations have higher photostability than pure tranilast in the same formulation. However, this improved photostability still results in a significant proportion of the tranilast being photo-degraded and would not be suitable for long term storage. Also, the solvents used for preparation of these ionic liquid salt formulations are not suitable for internal delivery of tranilast. Moreover, there is no mention in EP1946753 of improved solubility in aqueous or bio-relevant media.