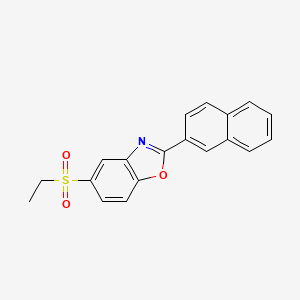 Ezutromid, also known as BMN-195 and SMTC-1100, is a first orally bioavailable utrophin’s translation modulator. Duchenne muscular dystrophy (DMD) is a lethal, progressive muscle wasting disease caused by a loss of sarcolemmal bound dystrophin, which results in the death of the muscle fibers leading to the gradual depletion of skeletal muscle.

Ezutromid is an orally administered small molecule utrophin modulator currently involved in a Phase 2 clinical trial produced by Summit Therapeutics for the treatment of Duchenne muscular dystrophy (DMD).[1][2] DMD is a fatal x-linked recessive disease affecting approximately 1 in 5000 males and is a designated orphan disease by the FDA and European Medicines Agency.[3] Approximately 1/3 of the children obtain DMD as a result of spontaneous mutation in the dystrophin gene and have no family history of the disease.[3] Dystrophin is a vital component of mature muscle function, and therefore DMD patients have multifarious forms of defunct or deficient dystrophin proteins that all manifest symptomatically as muscle necrosis and eventually organ failure.[3][4] Ezutromid is theorized to maintain utrophin, a protein functionally and structurally similar to dystrophin that precedes and is replaced by dystrophin during development.[3][5] Utrophin and dystrophin are reciprocally expressed, and are found in different locations in a mature muscle cell.[4][6] However, in dystrophin-deficient patients, utrophin was found to be upregulated and is theorized to replace dystrophin in order to maintain muscle fibers.[7] Ezutromid is projected to have the potential to treat all patients suffering with DMD as it maintains the production of utrophin to counteract the lack of dystrophin to retard muscle degeneration.[7][8] Both the FDA and European Medicines Agency has given ezutromid an orphan drug designation.[5][9] The FDA Office of Orphan Products and Development offers an Orphan Drug Designation program (ODD) that allows drugs aimed to treat diseases that affect less than 200,000 people in the U.S. monetary incentives such as a period of market exclusivity, tax incentives, and expedited approval processes.[5][10]

The Phase 2 clinical trial was ended in 2018 and the medication discontinued after it failed to show any benefit in slowing the disease.[11]

The first Phase 1b trial (NCT02056808) began on November 2013 and involved 12 patients aged 5–11 years old.[12] The patients were divided into three groups given escalating oral doses testing the safety and tolerability after each increase over the course of 10 days.[12]

Another completed Phase 1b trial (NCT02383511) began February 2015 and involved 12 patients aged 5–13 years old.[13] The goal was to determine the safety, tolerability, and pharmacokinetic parameters by measuring plasma concentration and major metabolite levels over 28 days for three sequence groups.[13] Each sequence involved placebo, 1250 mg, and 2500 mg BID (twice a day) doses given for one week each.[4][13]

A PhaseOut DMD, Phase 2, Proof of Concept (NCT02858362) clinical trial is underway that tests the clinical safety and efficacy of an oral suspension of ezutromid.[2] The 48-week open-label trial is enrolling 40 boys, ages 5–10, living in the U.K. or U.S.[2] MRI leg muscle change will be measured as well as ezutromid plasma concentration levels, with a secondary goal of obtaining quantifiable images of utrophin membrane stained biopsies at baseline and either 24 or 48 weeks.[2]

As of 2016, ataluren was the only approved drug in the EU to treat a specific subpopulation of patients with nmDMD, or DMD caused by a nonsense mutation.[14] However, nonsense mutations only account for approximately 15% of all patients with DMD.[15] Therefore, Summit Therapeutics projects to file for regulatory approval in the US and EU by 2019 and to reach market in 2020.[8] They expect to profit just over £24,046 in 2020 and £942,656 in 2025, which amounts to ~10% CGR for the first 7 years on the basis of treating all DMD patients in the US, EU, Iceland, Norway, Switzerland and Russia.[8]

Furthermore, Summit Therapeutics has entered an agreement with Sarepta Theraputics as of October 2016 regarding the commercialization of ezutromid.[16] The agreement consists of a collaboration between Sarepta and Summit to share the research and developing costs for the development of novel therapies to treat DMD patients.[16] 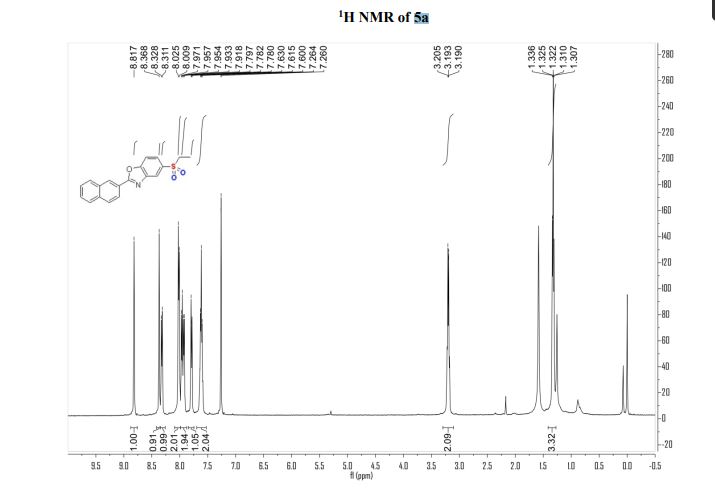 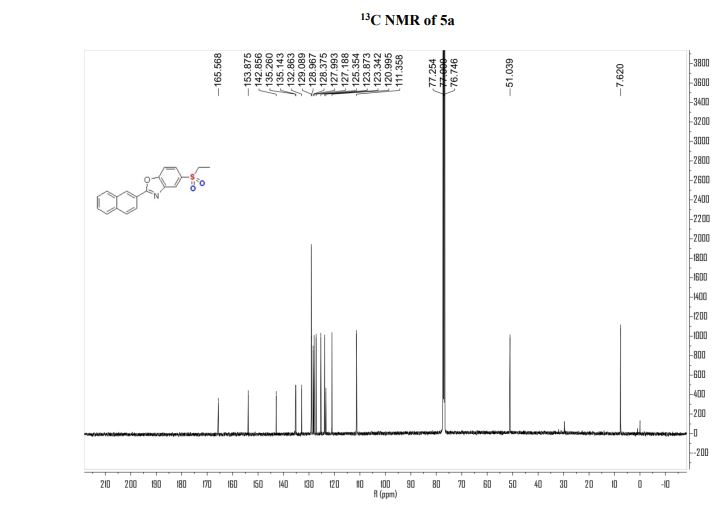 It has been discovered that the compound of formula I (5-(ethylsulfonyl)-2-(naphthalen-2-yl)benzo[d]oxazole) has excellent properties for the treatment of Duchenne muscular dystrophy (see, e.g., international patent application publication no. WO 2007/091106).

Procedure:
A vessel was equipped with a retreat blade stirrer and downward pumping turbine, a five necked flange lid, seal and clamp, stirrer gland and overhead stirrer, thermometer pocket, Dean- Stark trap, dropping funnel and condenser. The water to the condenser was then switched on.
The sodium hydroxide and 0.80 L of water were then mixed (whilst cooling in an ice bath until all the sodium hydroxide has dissolved – caution exothermic). The resulting solution was then transferred to a scrubber appropriately attached to the vessel.

The product was then dried in a vacuum oven at 65°C at a pressure of 1 Ombar until constant weight was achieved (less than 0.5 g difference between consecutive measurements of mass which must be at least 1 h apart).
The product was obtained as a sandy-beige powder in a yield of 80%.

1. Procedure
100 mg of the compound of formula I was dissolved in the minimum amount of good solvent and then the anti-solvent was added to induce crystallisation. The supernatant liquor was then removed, and the resulting solid was dried under vacuum for 12 his.

A series of novel 2-arylbenzoxazoles that upregulate the production of utrophin in murine H2K cells, as assessed using a luciferase reporter linked assay, have been identified. This compound class appears to hold considerable promise as a potential treatment for Duchenne muscular dystrophy. Following the delineation of structure–activity relationships in the series, a number of potent upregulators were identified, and preliminary ADME evaluation is described. These studies have resulted in the identification of 1, a compound that has been progressed to clinical trials.

5-(Ethylsulfonyl)-2-(naphthalen-2-yl)benzo[d]oxazole (ezutromid, 1) is a first-in-class utrophin modulator that has been evaluated in a phase 2 clinical study for the treatment of Duchenne muscular dystrophy (DMD). Ezutromid was found to undergo hepatic oxidation of its 2-naphthyl substituent to produce two regioisomeric 1,2-dihydronaphthalene-1,2-diols, DHD1 and DHD3, as the major metabolites after oral administration in humans and rodents. In many patients, plasma levels of the DHD metabolites were found to exceed those of ezutromid. Herein, we describe the structural elucidation of the main metabolites of ezutromid, the regio- and relative stereochemical assignments of DHD1 and DHD3, their de novo chemical synthesis, and their production in systems in vitro. We further elucidate the likely metabolic pathway and CYP isoforms responsible for DHD1 and DHD3 production and characterize their physicochemical, ADME, and pharmacological properties and their preliminary toxicological profiles.

Following on from ezutromid, the first-in-class benzoxazole utrophin modulator that progressed to Phase 2 clinical trials for the treatment of Duchenne muscular dystrophy, a new chemotype was designed to optimise its physicochemical and ADME profile. Herein we report the synthesis of SMT022357, a second generation utrophin modulator preclinical candidate, and an asymmetric synthesis of its constituent enantiomers. The pharmacological properties of both enantiomers were evaluated in vitro and in vivo. No significant difference in the activity or efficacy was observed between the two enantiomers; activity was found to be comparable to the racemic mixture.