FDA approves first treatment for frequent urination at night due to overproduction of urine
The U.S. Food and Drug Administration today approved Noctiva (desmopressin acetate) nasal spray for adults who awaken at least two times per night to urinate due to a condition known as nocturnal polyuria (overproduction of urine during the night). Noctiva is the first FDA-approved treatment for this condition.

The U.S. Food and Drug Administration today approved Noctiva (desmopressin acetate) nasal spray for adults who awaken at least two times per night to urinate due to a condition known as nocturnal polyuria (overproduction of urine during the night). Noctiva is the first FDA-approved treatment for this condition.

“Today’s approval provides adults who overproduce urine at night with the first FDA-approved therapeutic option to help reduce the number of times a night they wake up to urinate,” said Hylton V. Joffe, M.D., M.M.Sc., director of the Division of Bone, Reproductive, and Urologic Products in the FDA’s Center for Drug Evaluation and Research. “It is important to know that Noctiva is not approved for all causes of night-time urination, so patients should discuss their symptoms with their health care provider who can determine the underlying cause of the night-time urination and whether Noctiva is right for them.”

Nocturia (wakening at night to urinate) is a symptom that can be caused by a wide variety of conditions, such as congestive heart failure, poorly controlled diabetes mellitus, medications, or diseases of the bladder or prostate. Before considering Noctiva, health care providers should evaluate each patient for possible causes for the nocturia, and optimize the treatment of underlying conditions that may be contributing to the night-time urination. Because Noctiva is approved only for adults with nocturia caused by nocturnal polyuria, health care providers should confirm overproduction of urine at night with a 24-hour urine collection, if one has not been obtained previously. Health care providers should also be mindful of underlying conditions that can cause nocturia, but that make treatment with Noctiva unsafe, such as excessive drinking of fluids or symptomatic congestive heart failure.

Noctiva is taken daily, approximately 30 minutes before going to bed. It works by increasing the absorption of water through the kidneys, which leads to less urine production.

Noctiva is being approved with a boxed warning and a Medication Guide because it can cause low sodium levels in the blood (hyponatremia). Severe hyponatremia can be life-threatening if it is not promptly diagnosed and treated, leading to seizures, coma, respiratory arrest or death. Health care providers should make sure the patient’s sodium level is normal before starting Noctiva, and should check sodium levels within one week and approximately one month after starting treatment and periodically thereafter. The lower Noctiva dose is recommended as the starting dose for those who may be at risk for hyponatremia, such as the elderly. Noctiva should not be used in patients at increased risk of severe hyponatremia, such as those with excessive fluid intake, those who have illnesses that can cause fluid or electrolyte imbalances, certain patients with kidney damage, and in those using certain medicines, known as loop diuretics or glucocorticoids.

Noctiva is also not recommended for the treatment of nocturia in pregnant women. Nocturia is usually related to normal changes in pregnancy that do not require treatment with Noctiva. Noctiva should not be used in children.

Although there are other FDA-approved medications that also contain desmopressin, none of those medications are approved to treat nocturia.

[62357-86-2].
» Desmopressin Acetate is a synthetic octapeptide hormone having the property of antidiuresis. It is a synthetic analog of vasopressin. 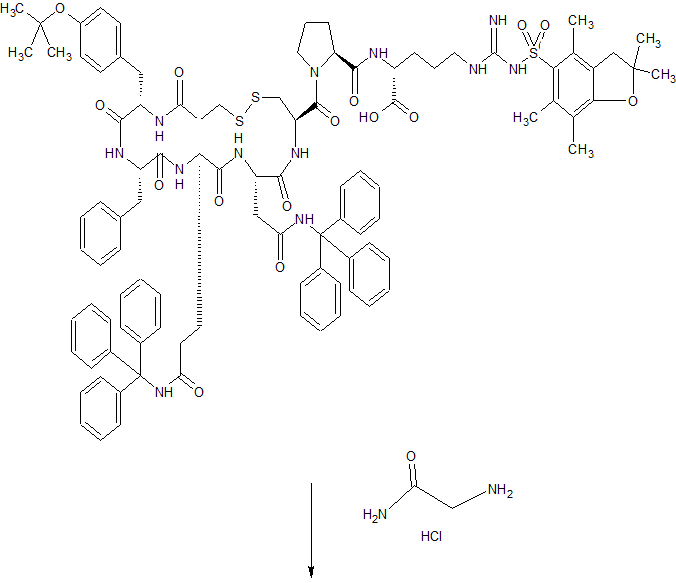 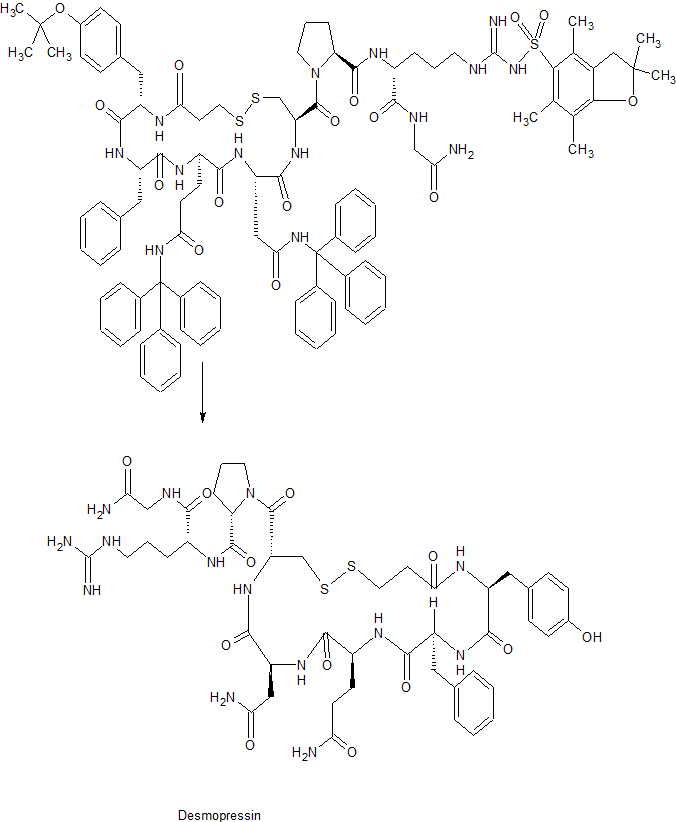 A monolithic column was prepared using l-phenylalanine as template and a covalent approach through the formation of Schiff base with o-phthalaldehyde (OPA). OPA, allylmercaptan, l-phenylalanine, and triethylamine were stirred at first, then methacrylic acid, 2-vinylpyridine, ethyleneglycol dimethacrylate, α,α-azobisisobutyronitrile, and 1-propanol were added to the reaction mixture. The resulting material was introduced into a capillary column. Following thermal polymerization, the template was then extracted with a mixture of HCl and methanol. The column was employed for the capillary electrochromatographic separation of oligopeptides. A capillary column of 75 (50) cm × 75 μm ID with a mobile phase of phosphate buffer (pH 7.0, 40 mM)/methanol (5%, v/v), an applied voltage of +15 kV, and detection at 214 nm, could baseline separate angiotensin I, angiotensin II, [Sar1, Thr8] angiotensin, oxytocin, vasopressin, tocinoic acid, β-casomorphin bovine, β-casomorphin human, and FMRF amide within 20 min. The separation behavior of the templated polymer was also compared with that of the non-templated polymer. As a result, it can be concluded that the electrochromatographic separation of this set of peptides was mediated by a combination of electrophoretic migration and chromatographic retention involving hydrophobic, hydrogen bonding, electrostatic as well as the Schiff base formation with OPA in the cavity of the templated polymer.

Desmopressin acetate is a structural analogue of natural arginine vasopressin, which is the result of two changes in the chemical structure of natural hormones. The structure is as follows:

Desmopressin acetate has a good hemostatic effect and does not produce side effects of pressurization. Mainly used to treat central diabetes insipidus, hemophilia and therapeutic control of bleeding and preoperative bleeding prevention. Good results and small side effects.

In the existing synthetic method of desmopressin acetate, liquid phase synthesis to produce more waste, the reaction time is long, each coupling an amino acid need to be purified, post-processing cumbersome, low yield, is not conducive to Industrial production.