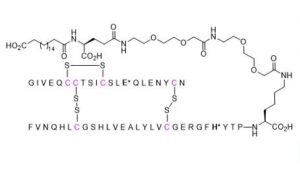 OI-338GT is a long-acting oral basal insulin analogue which had been in phase II clinical trials at Novo Nordisk for the treatment of patients with type 2 and type 1 diabetes. In 2016, the company discontinued the development of the product as the emergent product profile and required overall investments were not commercially viable in the increasingly challenging payer environment.

Recently, the first basal oral insulin (OI338) was shown to provide similar treatment outcomes to insulin glargine in a phase 2a clinical trial. Here, we report the engineering of a novel class of basal oral insulin analogues of which OI338, 10, in this publication, was successfully tested in the phase 2a clinical trial. We found that the introduction of two insulin substitutions, A14E and B25H, was needed to provide increased stability toward proteolysis. Ultralong pharmacokinetic profiles were obtained by attaching an albumin-binding side chain derived from octadecanedioic (C18) or icosanedioic acid (C20) to the lysine in position B29. Crucial for obtaining the ultralong PK profile was also a significant reduction of insulin receptor affinity. Oral bioavailability in dogs indicated that C18-based analogues were superior to C20-based analogues. These studies led to the identification of the two clinical candidates OI338 and OI320 (10 and 24, respectively).

Oral insulin 338 (I338) is a long-acting, basal insulin analogue formulated in a tablet with the absorption-enhancer sodium caprate. We investigated the efficacy and safety of I338 versus subcutaneous insulin glargine (IGlar) in patients with type 2 diabetes. METHODS: This was a phase 2, 8-week, randomised, double-blind, double-dummy, active-controlled, parallel trial completed at two research institutes in Germany. Insulin-naive adult patients with type 2 diabetes, inadequately controlled on metformin monotherapy or combined with other oral antidiabetic drugs (HbA1c 7·0-10·0%; BMI 25·0-40·0 kg/m(2)), were randomly assigned (1:1) to receive once-daily I338 plus subcutaneous placebo (I338 group) or once-daily IGlar plus oral placebo (IGlar group). Randomisation occurred by interactive web response system stratified by baseline treatment with oral antidiabetic drugs. Patients and investigators were masked to treatment assignment. Weekly insulin dose titration aimed to achieve a self-measured fasting plasma glucose (FPG) concentration of 4·4-7·0 mmol/L. The recommended daily starting doses were 2700 nmol I338 or 10 U IGlar, and maximum allowed doses throughout the trial were 16 200 nmol I338 or 60 U IGlar. The primary endpoint was treatment difference in FPG concentration at 8 weeks for all randomly assigned patients receiving at least one dose of trial product (ie, the full analysis set). The trial has been completed and is registered at ClinicalTrials.gov, number NCT02470039. FINDINGS: Between June 1, 2015, and Oct 19, 2015, 82 patients were screened for eligibility and 50 patients were randomly assigned to the I338 group (n=25) or the IGlar group (n=25). Mean FPG concentration at baseline was 9·7 (SD 2·8) in the I338 group and 9·1 (1·7) in the IGlar group. Least square mean FPG concentration at 8 weeks was 7·1 mmol/L (95% CI 6·4-7·8) in the I338 group and 6·8 mmol/L (6·5-7·1) in the IGlar group, with no significant treatment difference (0·3 mmol/L [-0·5 to 1·1]; p=0·46). I338 and IGlar were well tolerated by patients. Adverse events were reported in 15 (60%) patients in the I338 group and 17 (68%) patients in the IGlar group. The most common adverse events were diarrhoea (three [12%] patients in each group) and nasopharyngitis (five [20%] in the I338 group and two [8%] in the IGlar group). Most adverse events were graded mild (47 of 68 events), and no severe adverse events were reported. One patient in the IGlar group had a treatment-emergent serious adverse event (urogenital haemorrhage of moderate intensity, assessed by the investigator as unlikely to be related to treatment; the patient recovered). Incidence of hypoglycaemia was low in both groups (n=7 events in the I338 group; n=11 in the IGlar group), with no severe episodes. INTERPRETATION: I338 can safely improve glycaemic control in insulin-naive patients with type 2 diabetes with no evidence of a difference compared with insulin glargine, a widely used subcutaneously administered basal insulin. Further development of this particular oral insulin project was discontinued because I338 doses were high and, therefore, production of the required quantities of I338 for wide public use was deemed not commercially viable. Improvement of technologies involved in the product’s development is the focus of ongoing research. FUNDING: Novo Nordisk…..Halberg, I. B.; Lyby, K.; Wassermann, K.; Heise, T.; Zijlstra, E.; Plum-Mörschel, L. Efficacy and safety of oral basal insulin versus subcutaneous insulin glargine in type 2 diabetes: a randomised, double-blind, phase 2 trial. Lancet Diabetes Endocrinol. 2019, 7, 179– 188,  DOI: 10.1016/s2213-8587(18)30372-3