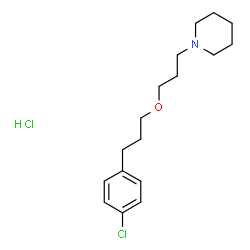 Pitolisant (INN) or tiprolisant (USAN) is a histamine receptor inverse agonist/antagonist selective for the H3 subtype.[1] It hasstimulant and nootropic effects in animal studies,[2] and may have several medical applications, having been researched for the treatment of narcolepsy, for which it has been granted orphan drug status in the EU and US.[3][4] It is currently in clinical trials forschizophrenia and Parkinson’s disease.[4][5][6]

Pitolisant hydrochloride was approved by European Medicine Agency (EMA) on Mar 31, 2016. It was developed and marketed as Wakix® by Bioprojet in EU.

Pitolisant is being developed by Bioprojet for the oral treatment of central nervous system disorders. Pitolisant is a selective histamine H3-receptor antagonist/inverse agonist which enhances the activity of histaminergic neurons. Pitolisant has been launched in several countries for the treatment of narcolepsy, and is approved in the US, EU, Iceland and Liechtenstein. Clinical development is underway for type-1 diabetes, hypersomnia and drug abuse in countries worldwide.

Phase III development was also conducted for the treatment of hypersomnia in Switzerland. Phase II development for attention-deficit hyperactivity disorder was conducted in France. However, there were no recent reports on development identified. Development in epilepsy and obesity has been discontinued.

Ferrer and Bioprojet appeared to have a co-development agreement for pitolisant that allowed the mutual use of both companies’ technical and scientific resources; however, as per Ferrer’s communication dated June 2016, the drug is no longer in its portfolio. Pitolisant hydrochloride is an antagonist/inverse agonist of the histamine H3 receptor, which is indicated in adults for the treatment of narcolepsy with or without cataplexy.

Wakix® is available as tablet for oral use, containing 4.5 mg and 18 mg of Pitolisant hydrochloride. The initial dose of 9 mg (two 4.5 mg, tablets) per day, and it should be used at the lowest effective dose, depending on individual patient response and tolerance, according to an up-titration scheme, without exceeding the dose of 36 mg/day.

Pitolisant, also known as Tiprolisant, is a histamine receptor inverse agonist/antagonist selective for the H3 subtype. It has stimulant and nootropic effects in animal studies, and may have several medical applications, having been researched for the treatment of narcolepsy, for which it has been granted orphan drug status in the EU and US. It is currently in clinical trials for schizophrenia and Parkinson’s disease. Pitolisant was the first clinically used H3 receptor inverse agonist.

The European Medicines Agency (EMA) has recommended granting marketing authorization for pitolisant (Wakix, Bioprojet Pharma) for narcolepsy with or without cataplexy, the agency announced today.

Narcolepsy is a rare sleep disorder that affects the brain’s ability to regulate the normal sleep-wake cycle, leading to excessive daytime sleepiness, including the sudden urge to sleep, and disturbed night-time sleep. Some patients also experience sudden episodes of cataplexy, potentially causing dangerous falls and increasing the risks for accidents, including car accidents. Symptoms of narcolepsy can be severe and significantly reduce quality of life.

Pitolisant “will add to the available treatment options for narcolepsy. It is a first-in-class medicine that acts on histamine H3 receptors in the brain. This leads to increased histamine release in the brain, thereby enhancing wakefulness and alertness,” the EMA notes in a news release.

The EMA recommendation for approval of pitolisant is based on an evaluation of all available safety and efficacy data conducted by the Committee for Medicinal Products for Human Use (CHMP). The data include two pivotal placebo-controlled trials involving 259 patients, as well as one uncontrolled, open-label study involving 102 patients with narcolepsy and one supportive study in 105 patients.

The studies showed that pitolisant was effective in reducing excessive daytime sleepiness in patients with narcolepsy. The beneficial effect of the drug on cataplexy was demonstrated in one of the pivotal studies as well as in the supportive study.

No major safety concerns with pitolisant emerged in testing. Insomnia, headache, and nausea were among the most common adverse effects observed in the clinical trials, and the CHMP decided on measures to mitigate these risks, the EMA said. The CHMP also requested the company conduct a long-term safety study to further investigate the safety of the drug when used over long periods.

Pitolisant for narcolepsy received orphan designation from the Committee for Orphan Medicinal Products in 2007. Orphan designation provides medicine developers access to incentives, such as fee reductions for scientific advice, with the aim of encouraging the development of treatments for rare disorders.

The CHMP opinion will now be sent to the European Commission for the adoption of a decision on a European Union–wide marketing authorization. Once that has been granted, each member state will decide on price and reimbursement based on the potential role/use of this medicine in the context of its national health system.

Narcolepsy-cataplexy, or Gelineau syndrome, is a rare but serious disorder characterized by excessive daytime sleepiness which can be an extreme hindrance to normal professional and social activities, and which is accompanied by more or less frequent attacks of cataplexy (a sudden loss of muscle tone triggered by emotions as varied as laughter or fear) and erratic episodes of REM sleep (during wakefulness and during sleep), sometimes associated with hypnagogic hallucinations. Moreover, individuals with narcolepsy have various degrees of cognitive impairment and tend to be obese (reviewed by Dauvilliers et al., Clin. Neurophysiol., 2003, 114, 2000; Baumann and Bassetti, Sleep Med. Rev., 2005, 9, 253).

The disorder is caused by the loss of a group of neurons in the brain which produce two peptides, orexins, also known as hypocretins, located in the anterior hypothalamus and projecting to the main groups of aminergic neurons which regulate wakefulness and sleep. Patients with the disorder generally have very low levels of orexins in cerebrospinal fluid. Orexin knock-out mice display many of the symptoms seen in narcoleptic subjects, confirming the role of these peptides and thereby providing an excellent animal model of the disease (Chemelli et al., Cell, 1999, 98, 437).

Several types of treatments which can improve the symptoms of narcolepsy already exist, although they do not completely relieve symptoms and, furthermore, can cause significant side effects limiting their usefulness.

For instance, amphetamines or analogues such as methylphenidate which release catecholamines are used to treated daytime sleepiness, but these agents induce a state of excessive excitation as well as cardiovascular disturbances and also carry a potential for drug addiction.

Modafinil, a drug whose mechanism of action is unclear, also improves daytime sleepiness without causing as many side effects as amphetamines. Nonetheless, its efficacy is limited and it can cause headaches and nausea, particularly at high doses. Moreover amphetamines and/or modafinil do not appear to improve some of the most disabling symptoms of the disease, particularly cataplexy attacks, cognitive deficits and weight gain. With regard to cataplexy, treatments include antidepressants and oxybate. Effectiveness of the former has not been demonstrated (Cochrane Database Syst. Rev., 2005, 20, 3), and the latter is a drug of illegal abuse and its use is restricted.

It has also been shown that histamine H3 receptor antagonists induce the activation of histaminergic neurons in the brain which release histamine, a neurotransmitter with a crucial role in maintaining wakefulness (Schwartz et al., Physiol. Rev. 1991, 71, 1).

Pharmaceutical products with histamine H3 receptor ligand properties and 0 subsequent pharmacological activities thereof are described in EP-980300. An especially important product among those disclosed is 1-[3-[3-(4- chlorophenyl)propoxy] propyl]-piperidine. This compound is disclosed as the free base and as the oxalate salt.

Distilled 1-[3-[3-(4-chlorophenyl)propoxy]propyl]-piperidine (1.0 kg) and anhydrous ethyl acetate (4.5 kg) are transferred to a 10-L glass vessel fitted with a cooling bath and a gas inlet. A stream of gaseous hydrogen chloride is bubbled in the reaction mixture at 20-250C.

The pH of the solution is checked by taking a 0.5 mL sample of the reaction mixture and diluting it with 5 mL of deionized water. The final pH must be about 3-4.

The mixture is cooled to -10°C-(-12°C) and stirred at this temperature for 1 h. The precipitate is filtered by using a sintered glass filter and washed with 0.5 L of anhydrous ethyl acetate previously cooled to 0-50C. The product is dried in a vacuum oven at 5O0C for a minimum period of 12 hours. The resulting crude 1 -[3-[3-(4-chlorophenyl)propoxy]propyl]-piperidine monohydrochloride weighs 1.10 kg. 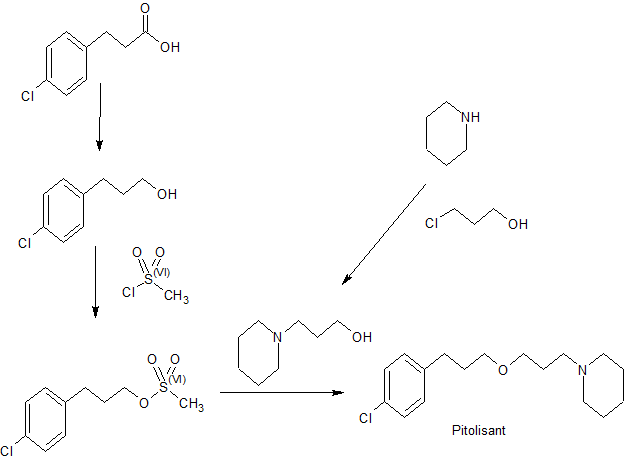