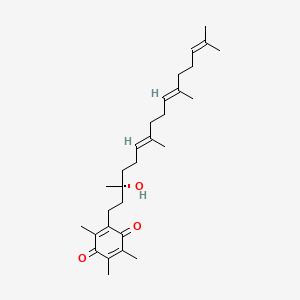 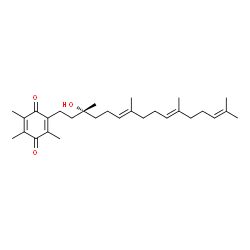 Vatiquinone was originally developed by Edison Pharmaceuticals, then licensed to Sumitomo Dainippon Pharma in Japan in 2013.

Orphan drug designations for the treatment of Friedreich’s, Leigh syndrome and Rett’s syndrome were granted to the compound by FDA in 2014.
In 2013, the compound was licensed to Sumitomo Dainippon Pharma by Edison Pharmaceuticals in Japan for development and commercialization for the treatment of pediatric orphan inherited mitochondrial and adult central nervous system diseases.

On 17 January 2018, orphan designation (EU/3/17/1971) was granted by the European Commission to Edison Orphan Pharma BV, The Netherlands, for vatiquinone (also known as alpha-tocotrienol quinone) for the treatment of RARS2 syndrome.

Vatiquinone, also known as EPI 743, is an orally bioavailable para-benzoquinone being developed for inherited mitochondrial diseases. The mechanism of action of EPI-743 involves augmenting the synthesis of glutathione, optimizing metabolic control, enhancing the expression of genetic elements critical for cellular management of oxidative stress, and acting at the mitochondria to regulate electron transport.

Vatiquinone has been investigated for the treatment and prevention of Retinopathy, Rett Syndrome, Genetic Disease, Noise-induced Hearing Loss, and Methylmalonic Aciduria and Homocystinuria,Cblc Type.

EPI-743 (vatiquinone) is a compound being developed by BioElectron  (previously known as Edison Pharmaceuticals) to treat Friedreich’s ataxia (FA), a rare, autosomal recessive genetic disorder. The disorder is caused by mutations in the FXN gene, which encodes for a protein called frataxin. Frataxin is required for the normal functioning of mitochondria, or the energy factories of the cells. Decreased levels of frataxin, as observed in patients with FA, disrupts the normal function of mitochondria and leads to the gradual development of symptoms associated with the disease: impairment of muscle coordination, loss of muscle strength and sensation, and impaired speech, vision, and hearing.

Currently, there are no drugs available that could cure or help to effectively manage the condition, although a large number of potential treatments are in the pipeline.

EPI-743 is a drug belonging to the class of para-benzoquinones, a group of potent antioxidants. The regulation of oxidative stress is disturbed in people with FA. EPI-743 targets an enzyme called NADPH quinone oxidoreductase 1 (NQO1), helping to increase the biosynthesis of glutathione, a compound essential for the control of oxidative stress. The drug does not target any FA-specific biochemical pathways directly, but helps to improve the regulation of cellular energy metabolism in general. Due to its non-specific mechanism, the drug can be used in a variety of disorders where mitochondrial function is affected.

In December 2012, Edison Pharmaceuticals started a placebo-controlled Phase 2 study (NCT01728064) to examine the safety and efficacy of EPI-743 on visual and neurological function in FA patients. The study was completed in February 2016. The results indicated no significant differences in visual function at six months between patients treated with EPI-743 and those who received a placebo. However, researchers reported a trend toward improvement in neurological function.

In October 2013, the University of South Florida started a small Phase 2 study (NCT01962363) to evaluate the effects of EPI-743 in patients with rare point mutations leading to FA. The study investigated whether treatment with EPI-743 has a discernible impact on neurological function. The results announced in April 2016 demonstrated significant improvements in neurological functions over 18 months. However, the trial only included three participants.

Currently, no further trials testing EPI-743 in FA patients is taking place. However, the drug is in clinical trials for several other disorders that affect the functions of mitochondria, including Leigh syndrome, mitochondrial respiratory chain disease, Pearson syndrome, and others.

In February 2014, the U.S. Food and Drug Administration (FDA) granted orphan drug status to EPI-743, which allows a more expedited drug approval process. The FDA also granted fast track status to EPI-743 for the treatment of FA in March 2014.

Edison Pharmaceuticals is developing vatiquinone, which was awarded Fast Track status for Friedreich’s ataxia in March 2014.

It is known that a-tocotrienol quinones are pharmaceutically active.

Synthetic pathways to produce the R-isomer of tocotrienol quinones in a stereospecific way are very expensive and therefore only of limited interest.

The synthesis of a-tocotrienol is known from Kabbe and Heitzer, Synthesis 1978, 888-889, however, no indication of chirality whatsoever is indicated.

The synthesis of tocotrienol from the corresponding 4-oxo-chromanol-derivative is known from US 6,096,907, however, no indication of chirality is indicated.

Separation of chiral compounds by chromatography is principally known. However, it is also known that the quantitative separation is very often very difficult to achieve.

Due to the importance of these substances, there exists a high interest in a process which would produce R-tocotrienol quinones in a large scale in an easy and economic way.

The present invention is further illustrated by the following experiments.

[0123] Other methods for isolation or enrichment of tocotrienol from certain plant oils and plant oil by-products have been described in the literature. For some examples of such isolation and purification processes, see for instance Top A. G. et al, U.S. Pat. No. 5,190,618; Lane R et al, U.S. Pat No. 6,239,171; Bellafiore, L. et al. U.S. Pat. No.6,395,915; May, CY et al, U.S. Pat. No.6,656,358; Jacobs, L et al, U.S. Pat. No. 6,838,104; Sumner, C et al. Int. Pat. Pub. WO 99/38860, or Jacobs, L, Int. Pat. Pub. WO 02/500054. The compounds for use in the present invention and the other therapeutically active agents can be administered at the recommended maximum clinical dosage or at lower doses. Dosage levels of the active compounds in the compositions for use in the present invention may be varied so as to obtain a desired therapeutic response depending on the route of administration, severity of the disease and the response of the patient. When administered in combination with other therapeutic agents, the therapeutic agents can be formulated as separate compositions that are given at the same time or different times, or the therapeutic agents can be given as a single composition.

19 February 2013 EPI-743 Vatiquinone  is a new drug that is based on vitamin E. Tests have shown that it can help improve the function of cells with mitochondrial problems. It may be able to treat people with genetic disorders that affect metabolism and mitochondria Edison Pharmaceuticals and Bambino Gesu Children’s Hospital have announced the commencement of EPI-743 Phase 2 cobalamin C deficiency syndrome trial. EPI-743 is an orally bioavailable small molecule and a member of the para-benzoquinone class of drugs. The trial’s principal investigator, Bambino Gesu Children’s Hospital, division of metabolism Professor Carlo Dionisi-Vici said, “Given the central role of glutathione in cellular redox balance and antioxidant defense systems, we are eager to explore whether a therapeutic that increases glutathione such as EPI-743 will provide clinical benefit.” Improvement in visual function is the primary endpoint of the placebo-controlled study while secondary outcome measurements assess neurologic and neuromuscular function, glutathione biomarkers, quality of life, in addition to safety parameters. The investigation is aimed at assessing the efficacy of EPI-743 in disorders of intermediary metabolism that also result in redox disturbances. EPI-743 is an orally absorbed small molecule that readily crosses into the central nervous system. It works by targeting the enzyme NADPH quinone oxidoreductase 1 (NQO1). Its mode of action is to synchronize energy generation in mitochondria with the need to counter cellular redox stress Friedreich’s ataxia (FRDA) is an autosomal recessive neurodegenerative and cardiodegenerative disorder caused by decreased levels of the protein frataxin. The disease causes the progressive loss of voluntary motor coordination (ataxia) and cardiac complications. Symptoms typically begin in childhood, and the disease progressively worsens as the patient grows older; patients eventually become wheelchair-bound due to motor disabilities. Patients with Friedreich’s ataxia develop loss of visual acuity or changes in color vision. Most have jerky eye movements (nystagmus), but these movements by themselves do not necessarily interfere with vision. ……………… Bioorg Med Chem Lett 2011, 21(12): 3693 http://www.sciencedirect.com/science/article/pii/S0960894X11005440We report that α-tocotrienol quinone (ATQ3) is a metabolite of α-tocotrienol, and that ATQ3 is a potent cellular protectant against oxidative stress and aging. ATQ3 is orally bioavailable, crosses the blood–brain barrier, and has demonstrated clinical response in inherited mitochondrial disease in open label studies. ATQ3 activity is dependent upon reversible 2e-redox-cycling. ATQ3 may represent a broader class of unappreciated dietary-derived phytomolecular redox motifs that digitally encode biochemical data using redox state as a means to sense and transfer information essential for cellular function.