Adrafinil is touted mainly for its stimulant properties and ability to provide alertness and wakefulness.

Adrafinil (INN) (brand name Olmifon)[2] is a discontinued wakefulness-promoting agent (or eugeroic) that was formerly used inFrance to promote vigilance (alertness), attention, wakefulness, mood, and other parameters, particularly in the elderly.[3][4] It was also used off-label by individuals who wished to avoid fatigue, such as night workers or others who needed to stay awake and alert for long periods of time. Additionally, “adrafinil is known to a larger nonscientific audience, where it is considered to be a nootropic agent.”[3] Adrafinil is a prodrug; it is primarily metabolized in vivo to modafinil, resulting in very similar pharmacological effects.[3] Unlike modafinil, however, it takes time for the metabolite to accumulate to active levels in the bloodstream. Effects usually are apparent within 45–60 minutes when taken orally on an empty stomach. Adrafinil was marketed in France under the trade name Olmifon[2] until September 2011 when it was voluntarily discontinued.[4]

Because α1-adrenergic receptor antagonists were found to block effects of adrafinil and modafinil in animals, “most investigators assume[d] that adrafinil and modafinil both serve as α1-adrenergic receptor agonists.”[3] However, adrafinil and modafinil have not been found to bind to the α1-adrenergic receptor and they lack peripheral sympathomimetic side effects associated with activation of this receptor;[5] hence, the evidence in support of this hypothesis is weak, and other mechanisms are probable.[3] Modafinil was subsequently screened at a variety of targets in 2009 and was found to act as a weak, atypical blocker of the dopamine transporter(and hence as a dopamine reuptake inhibitor), and this action may explain some or all of its pharmacological effects.[6][7][8] Relative to adrafinil, modafinil possesses greater specificity in its action, lacking or having a reduced incidence of many of the common side effects of the former (including stomach pain, skin irritation, anxiety, and elevated liver enzymes with prolonged use).[9][10][11] There is a case report of two patients that adrafinil may increase interest in sex.[3] A case report of adrafinil-induced orofacial dyskinesia exists.[12][13] Reports of this side effect also exist for modafinil.[12]

In addition to modafinil, adrafinil also produces modafinil acid (CRL-40467) and modafinil sulfone (CRL-41056) as metabolites, which form from metabolic modification of modafinil.

Adrafinil was discovered in 1974 by two chemists working for the French pharmaceutical company Laboratoires Lafon who were screening compounds in search of analgesics.[14] Pharmacological studies of adrafinil instead revealed psychostimulant-like effects such as hyperactivity and wakefulness in animals.[14] The substance was first tested in humans, specifically for the treatment of narcolepsy, in 1977–1978.[14] Introduced by Lafon (now Cephalon), it reached the market in France in 1984,[4] and for the treatment of narcolepsy in 1985.[14][15] In 1976, two years after the discovery of adrafinil, modafinil, its active metabolite, was discovered.[14] Modafinil appeared to be more potent than adrafinil in animal studies, and was selected for further clinical development, with both adrafinil and modafinil eventually reaching the market.[14] Modafinil was first approved in France in 1994, and then in the United States in 1998.[15] Lafon was acquired by Cephalon in 2001.[16] As of September 2011, Cephalon has discontinued Olmifon, its adrafinil product, while modafinil continues to be marketed.[4]

Adrafinil and its active metabolite modafinil were added to the list of substances prohibited for athletic competition according to World Anti-Doping Agency in 2004.[17]

In 2005 a Medical Classification Committee in New Zealand recommended to MEDSAFE NZ that adrafinil be classified as a prescription medicine due to risks of it being used as a party drug. At that time adrafinil was not scheduled in New Zealand.[18]

In a clinical trial with clomipramine and placebo as active comparators, adrafinil showed efficacy in the treatment of depression.[3] In contrast to clomipramine however, adrafinil was well-tolerated, and showed greater improvement in psychomotor retardation in comparison.[3] As such, “further investigations of the antidepressive effects of adrafinil are warranted.”[3]

Adrafinil (CAS NO.63547-13-7) was discovered in the late 1970s by scientists working with the French pharmaceutical company Group Lafon. First offered in France in 1986 as an experimental treatment for narcolepsy, Lafon later developed modafinil, the primary metabolite of adrafinil. Modafinil possesses greater selective alpha-1 adrenergic activity than adrafinil without the side effects of stomach pain, skin irritations, feelings of tension, and increases in liver enzyme levels.
It is important to monitor the liver of an individual using adrafinil. It can cause liver damage in some instances.

The Adrafinil with CAS registry number of 63547-13-7 is also known as 2-[(Diphenylmethyl)sulfinyl]-N-hydroxyacetamide. The IUPAC name is 2-Benzhydrylsulfinyl-N-hydroxyacetamide. It belongs to product categories of Aromatics Compounds; Aromatics; Intermediates & Fine Chemicals; Pharmaceuticals; Sulfur & Selenium Compounds. This chemical is a light pink solid and its EINECS registry number is 264-303-1. In addition, the formula is C15H15NO3S and the molecular weight is 289.35. This chemical is harmful if swallowed.

Preparation of Adrafinil: it is prepared by reaction of diphenyl methyl bromide with thiourea. This reaction needs reagent NaOH. After reacting with chloroacetic acid, hydrochloric acid amine and hydrogen peroxide, the product is obtained. The yield is about 73%.

Uses of Adrafinil: it is used as non-amphetamine-type psychostimulant and can wake up and raise awareness. For the elderly arousal disorder and depressive symptoms in symptomatic treatment.

15.2 g (0.2 mol) of thiourea and 150 ml of demineralized water are introduced into a 500 ml three-neck flask equipped with a central mechanical stirrer, and with a dropping funnel and a condenser on the (respective) side-necks.The temperature of the reaction mixture is brought to 50°and 49.4g (0.2 mol) of bromodiphenyl- methane are added all at once whilst continuing the heating. After refluxing for about 5 minutes, the solution, which has become limpid, is cooled to 20°C and 200 ml of 2.5 N NaOH are then added dropwise whilst maintaining the said temperature. The temperature is then again kept at the reflex for 30 minutes after which, when the mixture has returned to ordinary temperature (15-25°C), the aqueous solution is acidified with 45 ml of concentrated hydrochloric acid. The supernatant oil is extracted with 250 ml of diethyl ether and the organic phase is washed with 4×80 ml of water and then dried over magnesium sulphate. 39 g of crude diphenylmethane-thiol are thus obtained. Yield 97.5%.

10 g (0.05 mol) of diphenylmethane-thiol and 2g (0.05 mol) of NaOH dissolved in 60 ml of demineralised water are introduced successively into a 250 ml flask equipped with a magnetic stirrer and a reflux condenser. The reactants are left in contact for 10 minutes whilst stirring, and a solution consisting of 7g (0.075 mol) of chloroacetic acid, 3g (0.075 mol) of NaOH pellets and 60 ml of demineralized water is then added all at once. The aqueous solution is gently warmed to about 50°C for 15 minutes, washed with 50 ml of ether, decanted and acidified with concentrated hydrochloric acid. after filtration, 10.2g of benzhydryl-thioacetic acid are thus obtained. Melting point 129-130°C. Yield 79%.

The following reaction mixture is heated under reflux for 7 hours: 10.2 g (0.0395 mol) of benzhydryl-thioacetic acid, 100 ml of anhydrous ethanol and 2 ml of sulphuric acid. When heating has been completed, the ethanol isevaporated in vacuo; the oily residue is taken up in 100 ml of ethyl ether and the organic solution is then washed with water, with an aqueous sodium carbonate solution and then with water until the wash waters have a neutral pH. After drying over sodium sulphate, the solvent is evaporated. 10.5g of ethyl benzhydryl- thioacetate are thus obtained. Yield 93%.

The following three solutions are prepared:

The solutions are heated, if necessary, until they become limpid, and when the temperatures have again fallen to below 40°C, the solution of potassium hydroxide in methanol is poured into the solution of hydroxylamine hydrochloride in alcohol. Finally, at a temperature of about 5° to 10°C, the solution of ethyl benzhydryl- thioacetate is added in its turn. After leaving the reactants in contact for 10 minutes, the sodium chloride is filtered off the limpid solution obtained is kept for about 15 hours at ordinary temperature. The methanol is then evaporated under reduced pressure, the residual oil is taken up in 100 ml of water and the aqueous solution is acidified with 3 N hydrochloric acid. The hydroxamic acid which has crystallized is filtered off, washed with water and then dried. 9.1 g of product are obtained. Yield = 87.5%. Melting point 118-120°C.

When the oxidation has ended, the acetic acid is evaporated under reduced pressure and the residual oil is taken up in 60 ml of ethyl acetate. The product which has crystallized is filtered off and then purified by recrystallisation from a 3:2 (by volume) mixture of ethyl acetate and isopropyl alcohol.

Figure 2: GC/MS extracted ion chromatogram (a) and mass spectrum (b) of derivatized adrafinil in the electron ionization mode (monitoring the m/z 167, 165 and 152 ions; all the four peaks are derivatised adrafinil products). 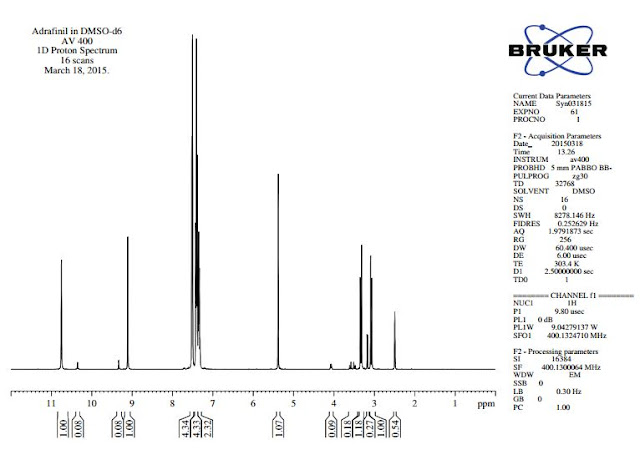 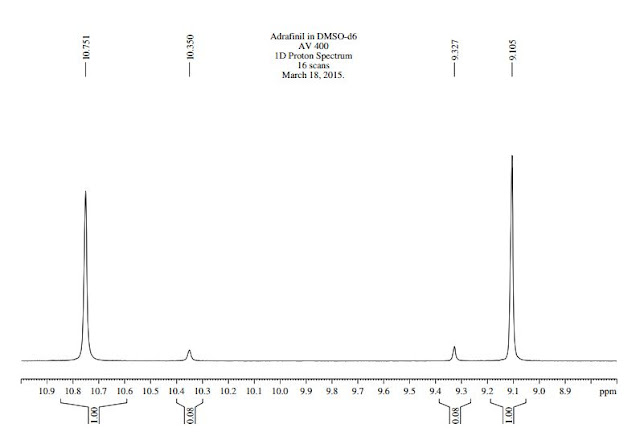 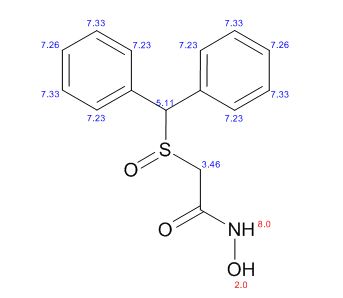 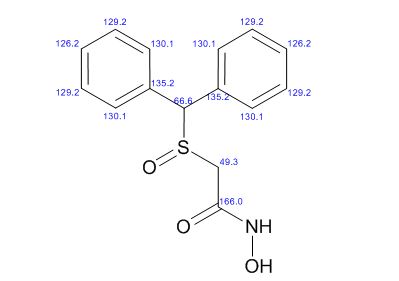 FIG. 1 shows the structure of adrafinil and its metabolites. 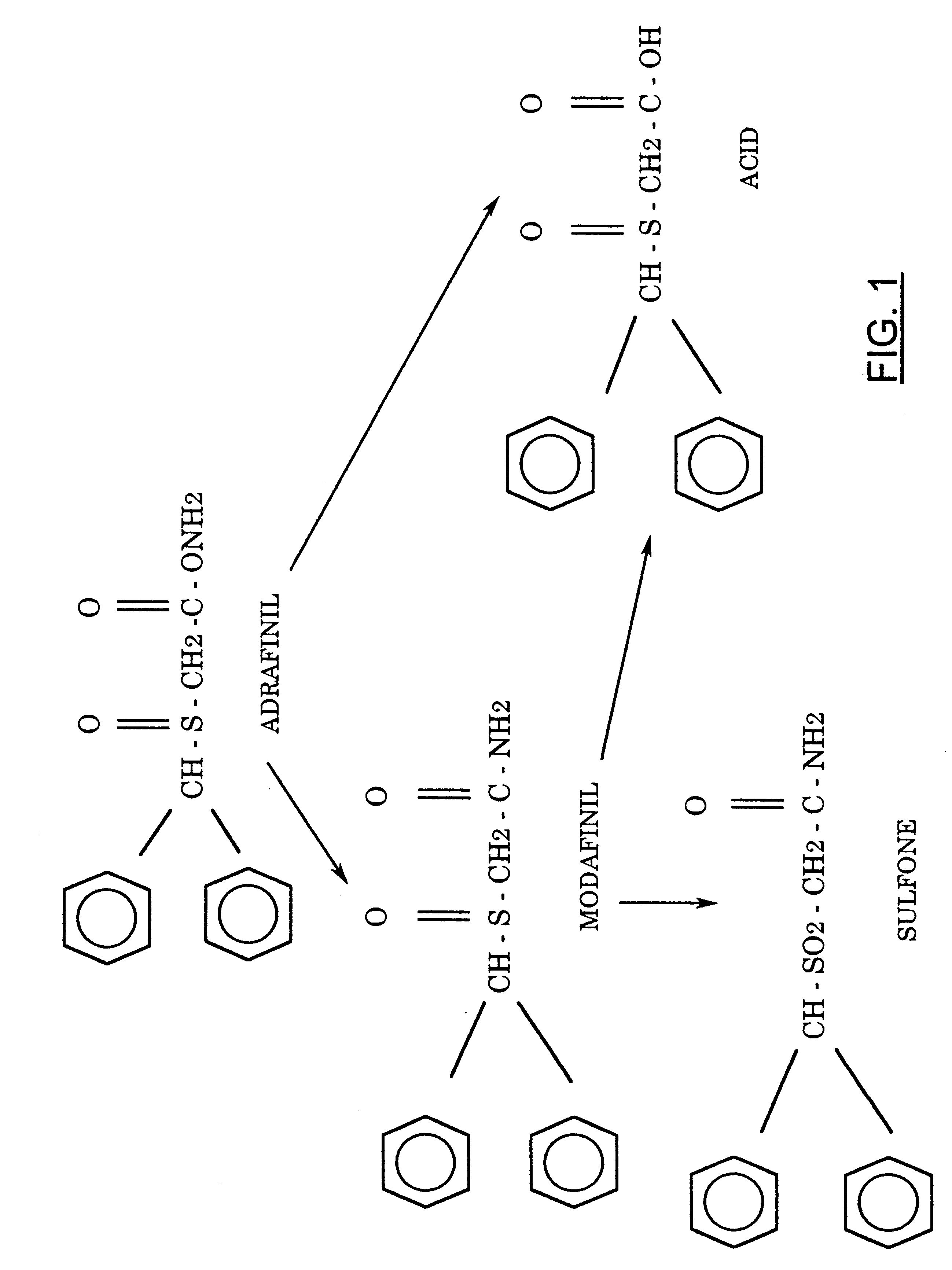 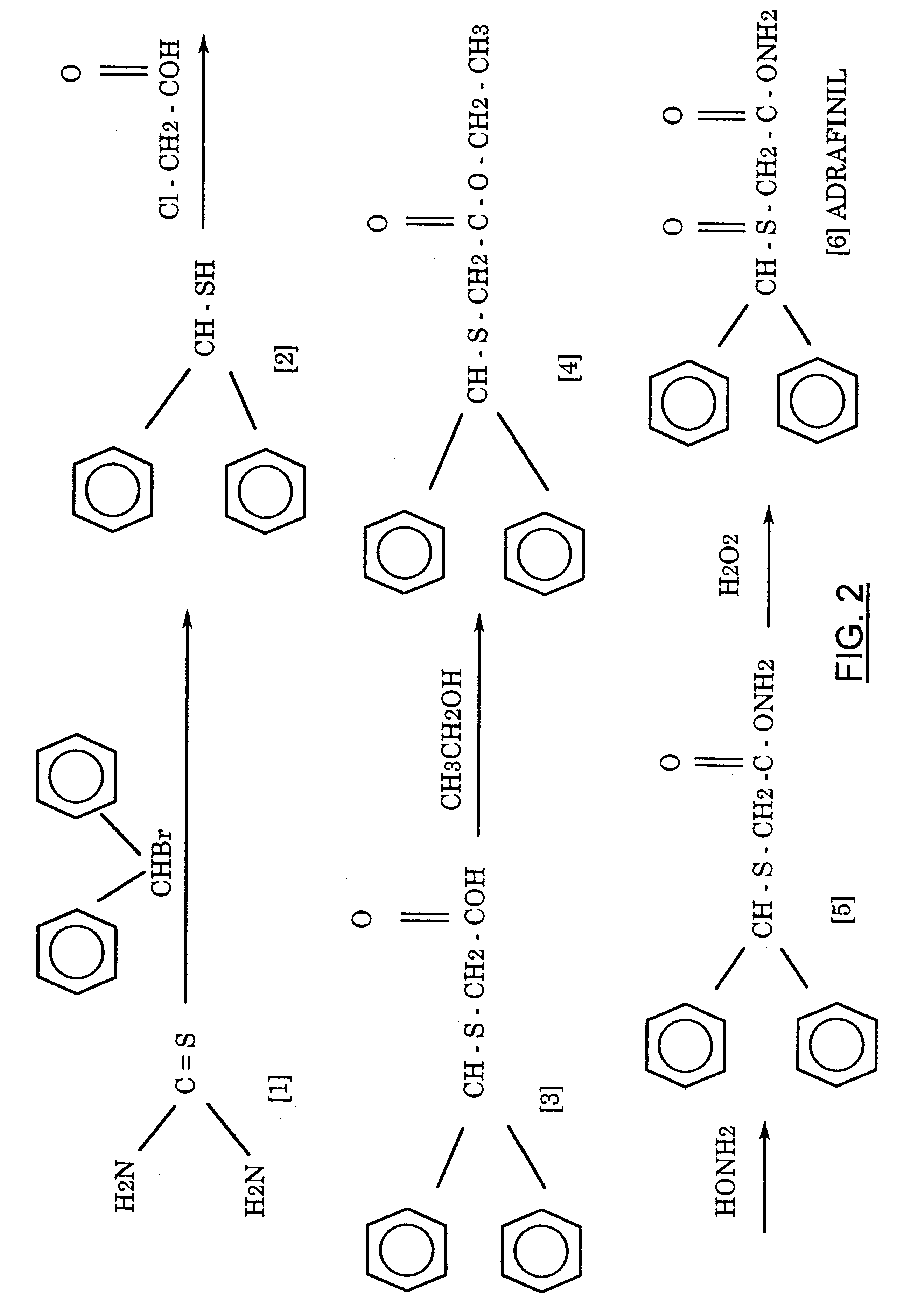