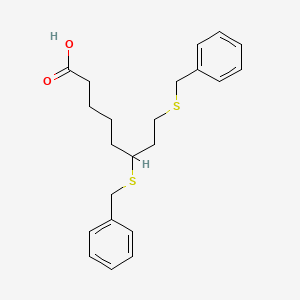 Rafael Pharmaceuticals (formerly Cornerstone Pharmaceuticals), a subsidiary of Rafael Holdings, is developing devimistat, the lead candidate from a program of thioctans and their derivatives that act as pyruvate dehydrogenase and alpha-ketoglutarate inhibitors and stimulators of pyruvate dehydrogenase kinase (PDK), using the company’s proprietary Altered Energy Metabolism Directed (AEMD) platform, for the iv treatment of hematological cancer [phase III, January 2021].

Devimistat (INN; development code CPI-613) is an experimental anti-mitochondrial drug being developed by Rafael Pharmaceuticals.[1] It is being studied for the treatment of patients with metastatic pancreatic cancer and relapsed or refractory acute myeloid leukemia (AML).

Devimistat’s mechanism of action differs from other drugs, operating on the tricarboxylic acid cycle and inhibiting enzymes involved with cancer cell energy metabolism. A lipoic acid derivative different from standard cytotoxic chemotherapy, devimistat is currently being studied in combination with modified FOLFIRINOX to treat various solid tumors and heme malignancies.

Clinical trials of the drug are underway including a Phase III open-label clinical trial[2] to evaluate efficacy and safety of devimistat plus modified FOLFIRINOX (mFFX) versus FOLFIRINOX (FFX) in patients with metastatic adenocarcinoma of the pancreas.

The attacks of CPI-613® on the TCA cycle also substantially increases the sensitivity of cancer cells to a diverse range of chemotherapeutic agents. This synergy allows for combinations of CPI-613® with lower doses of these generally toxic drugs to be highly effective with lower patient side effects. Combinations with CPI-613® represent a diverse range of potential opportunities to substantially improve patient benefit in many different cancers.

he FDA granted a Fast Track designation to devimistat for the treatment of patients with acute myeloid leukemia.

The FDA has granted a Fast Track designation to devimistat (CPI-613) for the treatment of patients with acute myeloid leukemia (AML), Rafael Pharmaceuticals, announced in a press release.1

“This designation underscores the pressing need to find new ways to combat this aggressive disease,” said Jorge Cortes, MD, director of the Georgia Cancer Center at Augusta University, and principal investigator on the phase 3 clinical trial, in a statement. “It brings hope not only to clinicians, but to patients who hear that they have been diagnosed.”

The first-in-class agent devimistat targets enzymes that are involved in cancer cell energy metabolism. This therapy substantially increases the sensitivity of cancer cells to a diverse range of chemotherapies, and this synergy allows for potential combinations that could be more effective with devimistat and lower doses of drugs that are generally toxic.

“Receiving Fast Track designation, especially during a pandemic that has created significant challenges for many trials across the globe, is a testament to the dedicated work of the Rafael team,” stated Sanjeev Luther, president and CEO of Rafael Pharmaceuticals, Inc.

Devimistat combinations appear promising with a diverse range of potential opportunities to improve benefit in patients with various cancer types. Two pivotal phase 3 clinical trials, including the AVENGER 500 study in pancreatic cancer (NCT03504423) and ARMADA 2000 for AML (NCT03504410), have been approved for initiation by the FDA.

The primary end point of the multicenter, open-label, randomized ARMADA 2000 study is complete response (CR), and secondary end points include overall survival and CR plus CR with partial hematologic recovery rate. To be eligible to enroll to the study, patients must be aged ≥50 years with a documented AML diagnosis that has relapsed from or became refractory to previous standard therapy. Patients must have an ECOG performance status of 0 to 2 and an expected survival longer than 3 months.

Five hundred patients are expected to be enrolled and randomized in the study. To enroll, patients could not have received prior radiotherapy or cytotoxic chemotherapy for their current AML. Those with active central nervous system involvement, active uncontrolled bleeding, history of other malignancy, or known hypersensitivity to study drugs are ineligible to enroll to the trial as well.

In a prior phase 1 study of devimistat plus high-dose cytarabine and mitoxantrone in patients with relapsed/refractory AML, the addition of devimistat sensitized AML cells to chemotherapy treatment.2

The objective response rate was 50% including CRs in 26 of 62 evaluable patients. Median overall survival was 6.7 months. In patients above age 60, the CR or CR with incomplete hematologic recovery rate was 47% and the median survival was 6.9 months.

Deuterated derivatives of 6,8-bis(benzylsulfanyl)octanoic acid (CPI-613 or devimistat ) or its salts for treating cancer.

[0004] One limitation to the clinical utility of CPI-613 is its very rapid metabolism. After IV dosing the half-life of 6,8-bis(benzylsulfanyl)octanoic acid is only about 1-2 hours (Pardee,

The terms“6,8-bis(benzylsulfanyl)octanoic acid” and“ 6,8-bis-benzylthio-octanoic acid” refer to the compound known as CPI-613 or devimistat, having the chemical structure

claiming the use of CPI-613 in combination with an autophagy inhibitor eg chloroquine for treating eg cancers.

CPI-613 (6,8-bis-benzylthio-octanoic acid) is a first-in-class investigational small-molecule (lipoate analog), which targets the altered energy metabolism that is common to many cancer cells. CPI-613 has been evaluated in multiple phase I, I/II, and II clinical studies, and has been granted orphan drug designation for the treatment of pancreatic cancer, acute myeloid leukemia (AML), peripheral T-cell lymphoma (PTCL), Burkitt lymphoma and myelodysplastic syndromes (MDS).

An Efficient, Economical Synthesis of the Novel Anti-tumor Agent CPI-613