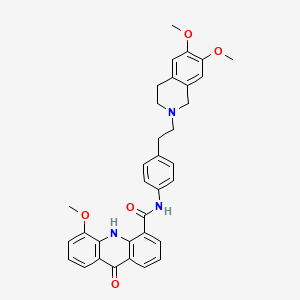 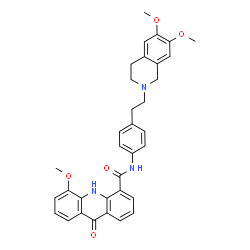 GlaxoSmithKline  (previously  Glaxo Wellcome ) was developing elacridar, an inhibitor of the multidrug resistance transporter BCRP (breast cancer resistant protein), as an oral bioenhancer for the treatment of solid tumors.

Elacridar is an oral bioenhancer which had been in early clinical trials at GlaxoSmithKline for the treatment of cancer, however, no recent development has been reported. It is a very potent inhibitor of P-glycoprotein, an ABC-transporter protein that has been implicated in conferring multidrug resistance to tumor cells.

Which is reduced with H2 over Pd/C in ethanol to yield the corresponding amine . Finally, this compound is condensed with 5-methoxy-9-oxo-9,10-dihydroacridine-4-carboxylic acid  by means of DCC and HOBt in DMF to afford the target carboxamide.

The intermediate 5-methoxy-9-oxo-9,10-dihydroacridine-4-carboxylic acidhas been obtained as follows: The condensation of 2-amino-3-methoxybenzoic acid  with 2-bromobenzoic acid  by means of K2CO3 and copper dust give the diphenylamine , which is cyclized to the target acridine Elacridar by means of POCl3 in refluxing acetonitrile.

Elacridar, previously referred to as GF120918, is a compound with the structure of 9,10-dihydro-5-methoxy-9-oxo-N-[4-[2-(1 ,2,3,4-tetrahydro- 6,7-dimethoxy-2-isoquinolinyl)ethyl] phenyl]-4-acridine-carboxamide or, as sometimes written, N-4-[2-(1 ,2,3,4-tetrahydro-6,7-dimethoxy-2-isoquinolinyl)ethyl]-phenyl)-9,10-dihydro-5-methoxy- 9-oxo-4-acridine carboxamide. Elacridar was originally described as a P-gp selective inhibitor but is now recognized as a dual P-gp/BCRP inhibitor. (Matsson P, Pedersen JM, Norinder U, Bergstrom CA, and Artursson P 2009 Identification of novel specific and general inhibitors of the three major human ATP-binding cassette transporters P-gp, BCRP and MRP2 among registered drugs. Pharm Res 26:1816-1831 ).

003 Elacridar has been examined with some success both in vitro and in vivo as a P-gp and BCRP inhibitor. By way of example, in cancer patients, coadministration of elacridar with therapeutic agents such as paclitaxel (P-gp substrate) and topotecan (BCRP substrate) improved their oral absorption – presumably by preventing efflux into the intestinal lumen by P-gp/BCRP pumps located in the Gl tract. Similarly, in rodents, elacridar has been coadministered with some success with pump substrates such as morphine, amprenavir, imatinib, dasatinib, gefitinib, sorafenib, and sunitinib to increase drug levels in the brain (by blocking efflux mediated by P-gp and BCRP at the blood brain barrier). A summary of some of these studies can be found in a study report by Sane et al. (Drug Metabolism And Disposition 40:1612-1619, 2012).

004 Administration of elacridar has several limitations. By way of example, elacridar has unfavorable physicochemical properties; it is practically insoluble in water, making it difficult to formulate as, for example, either an injectable or oral dosage form. Elacridar’s poor solubility and high lipophilicity result in dissolution rate-limited absorption from the gut lumen.

008 Montesinos et al. (Mol Pharm. 2015 Nov 2; 12(11 ):3829-38) attempted several PEGylated liposome formulations of elacridar which resulted in a partial increase in half life, but without an increase in efficacy when co-administered with a therapeutic agent.

009 Because of the great unpredictability in the art and poor correlations in many cases between animal and human data, the value of such formulation attempts await clinical trial.

0010 Studies of the whole body distribution of a microdose of 11C elacridar after intravenous injection showed high level accumulation in the liver (Bauer et al. J Nucl Med. 2016;57:1265-1268). This has led some to suggest that systemic levels of elacridar are also substantially limited by clearance in the liver.

0011 A potentially attractive strategy for improving metabolic stability of some drugs is deuterium modification. In this approach, one attempts to slow the CYP-mediated metabolism of a drug or to reduce the rate of formation of inactive metabolites by replacing one or more hydrogen atoms with deuterium atoms.

Deuterium is a safe, stable, non-radioactive isotope of hydrogen. Compared to hydrogen, deuterium forms stronger bonds with carbon. In select cases, the increased bond strength imparted by deuterium can positively impact the absorption, distribution, metabolism, excretion and/or toxicity (‘ADMET’) properties of a drug, creating the potential for improved drug efficacy, safety, and/or tolerability. At the same time, because the size and shape of deuterium are essentially identical to those of hydrogen, replacement of hydrogen by deuterium would not be expected to affect the biochemical potency and selectivity of the drug as compared to the original chemical entity that contains only hydrogen.

0012 Over the past 35 years, the effects of deuterium substitution on the rate of metabolism have been reported for a very small percentage of approved drugs (see, e.g., Blake, M I et al, J Pharm Sci, 1975, 64:367-91 ; Foster, A B, Adv Drug Res 1985, 14:1 -40 (“Foster”); Kushner, D J et al, Can J Physiol Pharmacol 1999, 79-88; Fisher, M B et al, Curr Opin Drug Discov Devel, 2006, 9:101 -09 (“Fisher”)). The results have been variable and unpredictable. For some compounds, deuteration indeed caused decreased metabolic clearance in vivo. For others, no change in metabolism was observed. Still others demonstrated increased metabolic clearance. The great unpredictability and variability in deuterium effects has led experts to question or dismiss deuterium modification as a viable drug design strategy for inhibiting metabolism (see Foster at p. 35 and Fisher at p. 101 ).

0013 The effects of deuterium modification on a drug’s metabolic properties are not predictable even when deuterium atoms are incorporated at known sites of metabolism. Only by actually preparing and testing a deuterated drug can one determine if and how the rate of metabolism will differ from that of its non-deuterated counterpart. See, for example, Fukuto et al. (J. Med. Chem. 1991 , 34, 2871 -76). Many drugs have multiple sites where metabolism is possible. The site(s) where deuterium substitution is required and the extent of deuteration necessary to see an effect on metabolism, if any, will be different for each drug.

0014 Considering elacridar’s challenging physicochemical and ADMET properties in humans, in spite of recent formulation advancements, there remains a need in the art for elacridar analogs that can achieve higher, less variable levels in the systemic circulation, at the blood-brain barrier, and elsewhere to optimize efflux inhibition.

00179 This example demonstrates a synthetic method for making elacridar analogs, deuterium substitutions based upon the deuteration of the starting compounds. The synthesis and the analog numbers refer to Figure 4.

temperature after the reaction progress was checked with LC-MS. Water (2.7 L) was added and the mixture was filtered through a pad of Celite. The Celite was washed with water (1.35L) and the combined filtrate was adjusted to pH~2 by addition of concentrated HCI (~410 mL) over 15 min. The resulting suspension was stirred at 10°C for 1.5 hours and the solid was filtered, washed with water (2.7 L) and dried at 45°C using a vacuum oven for 2 days to give compound 3 (465 g, ~100%) as a yellow solid.

atmosphere of hydrogen (1 atm, balloon) at 15-20 °C for 4h. The reaction mixture was filtered through a pad of Celite and the pad was washed with TFIF (1.0 L). The filtrate was concentrated to 3 volumes under vacuum and hexanes (4.0 L) was added. The resulting slurry was cooled to 0 °C and stirred for 1 h. The solid was filtered and washed with hexanes (2 X 500 ml_) and air dried overnight to afford the compound 8 (522 g, 90.8%) as an off -white solid.

00192 EE60 is synthesized by the procedure shown in Figure 4 and as continued in Figure 5.

00195 The resulting yellowish brown precipitate was removed by filtration and the filter cake was dried overnight (72 mg). Analysis of the filter cake by LCMS indicated the presence of a single peak at multiple wavelengths (215 nm, 220 nm, 254 nm,

Example 4: Demonstration of superior properties of instant analogs and compositions: in vivo ADMET.

Briefly, instant analogs are administered solutions in 10% aqueous polyethylene glycol-300 (PEG-300) or 6% Cavitron with 1 % dimethyl sulfoxide, or as well triturated suspensions in 0.5% aqueous HPMC containing 1 % Tween 80. Blood samples are collected at various times up to 48 h after drug administration; plasma samples are prepared and at “70°C until analysis.

00201 Monkeys. Monkeys receive instant analogs by oral gavage (8 ml/kg dose volume) on three separate occasions at dosages of 3 and 30 mg/kg as a suspension and 3 mg/kg as a solution in Cavitron. Blood samples are obtained from a femoral vein via an indwelling catheter and from the hepatic portal vascular access port

00203 Instant analogs are isolated from samples by precipitation with acetonitrile and quantified by LC/MS/MS coupled with an atmospheric pressure chemical ionization interface (475°C). Internal standards [in acetonitrile/10 mM ammonium formate, pH 3.0; 95:5 (v/v)] are added to 50 pi samples and vortexed and centrifuged for 30 min at 4000 rpm. The supernatants are injected onto the LC/MS/MS system using an HTS PAL autosampler (CTC Analytics, Zwingen, Switzerland) coupled to an Aria TX2 high-throughput liquid chromatographic system using turbulent flow technology (Cohesive Technologies, Franklin, MA) in focus mode. The mobile phase consists of a mixture of 0.1 % formic acid in water and 0.1 % formic acid in

00204 Alternatively, useful analytical methods to demonstrate the surprising and superior properties of the instant elacridar analogs are the methods as described by Stokvis et al, J Mass Spectr 2004: 39: 1122-1130.