Trastuzumab deruxtecan, sold under the brand name Enhertu, is an antibody-drug conjugate consisting of the humanized monoclonal antibody trastuzumab (Herceptin) covalently linked to the topoisomerase I inhibitor deruxtecan (a derivative of exatecan).[5][6] It is licensed for the treatment of breast cancer or gastric or gastroesophageal adenocarcinoma.[6][7] Trastuzumab binds to and blocks signaling through epidermal growth factor receptor 2 (HER2/neu) on cancers that rely on it for growth. Additionally, once bound to HER2 receptors, the antibody is internalized by the cell, carrying the bound deruxtecan along with it, where it interferes with the cell’s ability to make DNA structural changes and replicate its DNA during cell division, leading to DNA damage when the cell attempts to replicate itself, destroying the cell.[7] 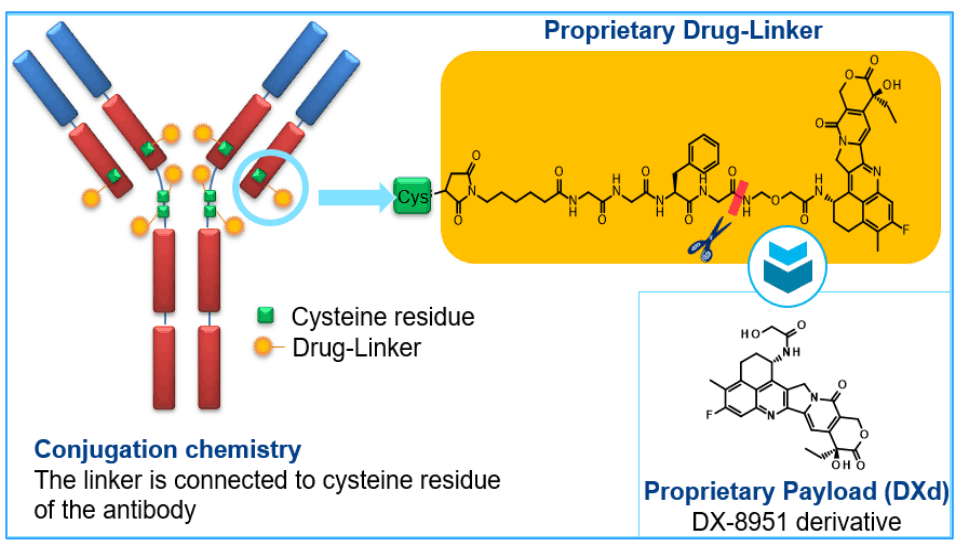 Trastuzumab deruxtecan (DS-8201a) is a HER2-targeting antibody-drug conjugate or ADC), structurally composed of a humanized anti-human HER2 (anti-hHER2) antibody, an enzymatically cleavable peptide-linker, and a proprietary topoisomerase I inhibitor payload (exatecan derivative or DX-8951 / DXd).

Trastuzumab deruxtecan active substance, also referred to as DS-8201a, results from the conjugation of the following intermediates: – Trastuzumab monoclonal antibody (MAAL-9001); – A drug-linker (MAAA-1162a) comprised of a Topoisomerase I inhibitor derivative of exatecan (MAAA1181a) and a tetrapeptide based cleavable linker (MFAH). MAAL-9001 is covalently conjugated to approximately 8 molecules of MAAA-1162a. The linker is designed to be stable in plasma to reduce systemic exposure to the released MAAA-1181a drug. After cell internalisation, the released MAAA-1181a drug leads to apoptosis of the target tumour cells via the inhibition of topoisomerase I. The released MAAA-1181a drug is cell-membrane permeable, giving the ability to penetrate and act in surrounding cells. The effect of the ADC derives primarily from the released MAAA-1181a drug and to a lesser extent to the antibody-dependent cellular cytotoxic (ADCC) effector function of the conjugated antibody. The quality of MAAL-9001 antibody, MAAA-1162a drug-linker and the conjugated antibody is described in separate sections. The structures of DS-8201a, MAAA-1162a, MAAA-1181a, and MAAL-9001 are provided in Figure 1. 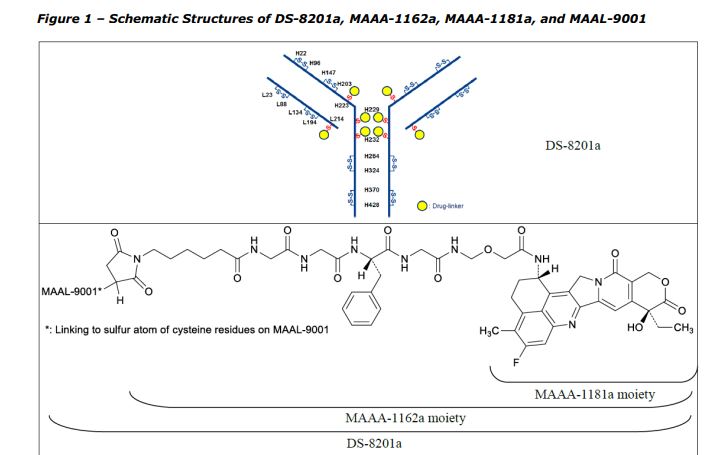 Fam-trastuzumab deruxtecan-nxki is an ADC that is comprised of an anti-HER2 antibody and the potent topoisomerase inhibitor exatecan [206]. These two entities are connected via a liner consisting of a maleimide conjugation handle that includes a protease-cleavable Gly-Gly-Phe-Gly (GGFG) tetrapeptide linker. This conjugation handle could release deruxtecan after internalization of the conjugate by the cancer cells that recognize the antibody. Fam-trastuzumabderuxtecan-nxki was developed by Daiichi Sankyo and AstraZeneca, and granted approval by the FDA in December 2019 [207]. There are approximately eight payload molecules/antibodies. Fam-trastuzumab deruxtecan-nxki has been approved for the treatment of adult patients with HER2 positive breast cancer that is unresectable or metastatic [208]. The synthesis of GGFG linker is described in Scheme 38 [209,210]. First, commercial tert-butyl 2-aminoacetate 274 was treated with Fmoc-L-Phe-OH 275 in the presence of HOBt and DIC, giving the corresponding product 276. Further deprotection of Fmoc group and amide formation gave the intermediate 278, which then underwent removal of Fmoc group to give GGFG linker 279. Lastly, treatment of 279 with the activated ester 280 provided 281.

Preparation of the payload exatecan derivative is described in Scheme 39 [211]. Aluminum-catalyzed Friedel-Crafts acylation of o-fluorotoluene 282 with succinic andydride 283 gave intermediate 284 in 90% yield. Next, hydrogenation reduction ofthe carbonyl group of 284, followed by reaction with SOCl2 in MeOH, furnished 285, which then underwent nitration with H2SO4 and KNO3 to give compound 286 in 48% overall yield. Hydrolysis of 286 followed by treatment with polyphosphoric acid (PPA) gave the cyclization product 287 in only 27% yield. The transformation of 287 into 288 was realized following the four-step sequence: carbonyl reduction with NaBH4, acid-mediated elimination reaction, PtO2-catalyzed hydrogenation reduction, and acetylation with Ac2O. Regioselective benzylic oxidation of 288 in acetone with KMnO4 gave 289 in 65% yield, further functionalization with butyl nitrile and Zn-mediated acylation gave compound 290 in 66% yield over 2 steps. Treatment of 290 with aqueous HCl provided hydrolysis product 291 in 50% yield, which then coupled with ethyl trifluoroacetate to provide intermediate 292. Polycyclic compound 294 was prepared from 292 and 293 through a [4+2] cycloaddition reaction in refluxing toluene. The key intermediate 294 next underwent acidic hydrolysis and chiral resolution to provide the chiral product 295. Further condensation reaction with 296 in the presence of T3P and Et3N in DCM and TFA-promoted removal of the Boc group formed 297. The synthesis of fam-trastuzumab deruxtecan-nxki is described in Scheme 40 [212]. The linker 281 was coupled to 297 in the presence of T3P and Et3N to give the linker-payload 298. Through transformation of the disulfide bonds into free sulfhydryl groups for linkage (DTT in pH 8.0 buffer), followed by re-oxidation of the remaining disulfide bonds with cysteine, the linker-payload 298 was conjugated to the anti-HER2 mAb to give fam-trastuzumab deruxtecan-nxki (XXIX) based on the amount of protein with approximately eight linker/payloads per antibody. 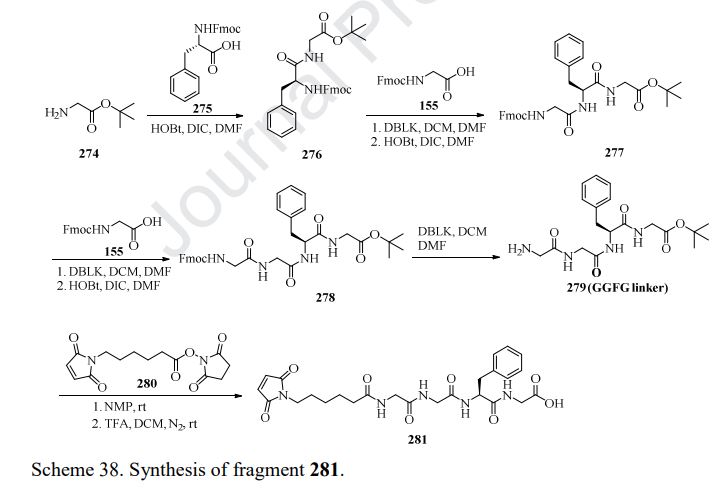 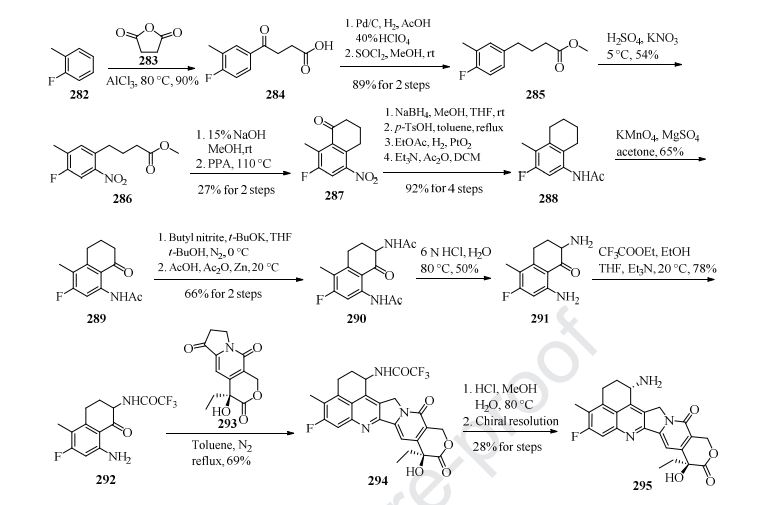 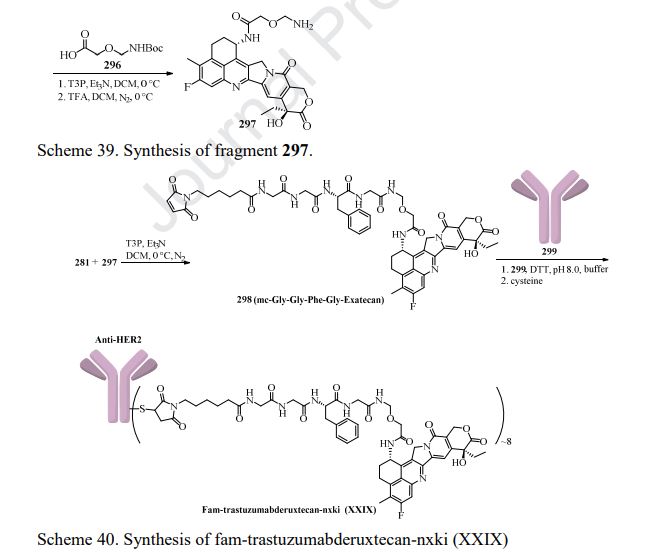 Trastuzumab deruxtecan-nxki is indicated for the treatment of adults with unresectable (unable to be removed with surgery) or metastatic (when cancer cells spread to other parts of the body) HER2-positive breast cancer who have received two or more prior anti-HER2-based regimens in the metastatic setting and for adults with locally advanced or metastatic HER2-positive gastric or gastroesophageal junction adenocarcinoma who have received a prior trastuzumab-based regimen.[6][7]

Side effects and label warnings

The prescribing information for fam-trastuzumab deruxtecan-nxki includes a boxed warning to advise health care professionals and patients about the risk of interstitial lung disease (a group of lung conditions that causes scarring of lung tissues) and embryo-fetal toxicity.[6] Interstitial lung disease and pneumonitis, including cases resulting in death, have been reported with fam-trastuzumab deruxtecan-nxki.[6]

The FDA granted the approval of Enhertu to Daiichi Sankyo.[6]

On 10 December 2020, the Committee for Medicinal Products for Human Use (CHMP) of the European Medicines Agency (EMA) adopted a positive opinion, recommending the granting of a conditional marketing authorization for the medicinal product Enhertu, intended for the treatment of metastatic HER2-positive breast cancer.[10][11] Enhertu was reviewed under EMA’s accelerated assessment program. The applicant for this medicinal product is Daiichi Sankyo Europe GmbH. Trastuzumab deruxtecan was approved for medical use in the European Union in January 2021.[3][4]

In January 2021, the U.S. Food and Drug Administration (FDA) granted accelerated approval to fam-trastuzumab deruxtecan-nxki for the treatment of adults with locally advanced or metastatic HER2-positive gastric or gastroesophageal (GEJ) adenocarcinoma who have received a prior trastuzumab-based regimen.[7][12]

Efficacy was evaluated in a multicenter, open-label, randomized trial (DESTINY-Gastric01, NCT03329690) in participants with HER2-positive locally advanced or metastatic gastric or GEJ adenocarcinoma who had progressed on at least two prior regimens, including trastuzumab, a fluoropyrimidine- and a platinum-containing chemotherapy.[7] A total of 188 participants were randomized (2:1) to receive fam-trastuzumab deruxtecan-nxki 6.4 mg/kg intravenously every three weeks or physician’s choice of either irinotecan or paclitaxel monotherapy.[7]