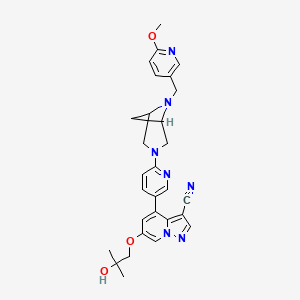 Selpercatinib is a tyrosine kinase inhibitor with antineoplastic properties.

A phase I/II trial is also under way in pediatric patients and young adults with activating RET alterations and advanced solid or primary CNS tumors.

Trk is a high affinity receptor tyrosine kinase activated by a group of soluble growth factors called neurotrophic factor (NT). The Trk receptor family has three members, namely TrkA, TrkB and TrkC. Among the neurotrophic factors are (1) nerve growth factor (NGF) which activates TrkA, (2) brain-derived neurotrophic factor (BDNF) and NT4/5 which activate TrkB, and (3) NT3 which activates TrkC. Trk is widely expressed in neuronal tissues and is involved in the maintenance, signaling and survival of neuronal cells.
The literature also shows that Trk overexpression, activation, amplification and/or mutations are associated with many cancers including neuroblastoma, ovarian cancer, breast cancer, prostate cancer, pancreatic cancer, multiple myeloma, astrocytoma. And medulloblastoma, glioma, melanoma, thyroid cancer, pancreatic cancer, large cell neuroendocrine tumor and colorectal cancer. In addition, inhibitors of the Trk/neurotrophin pathway have been shown to be effective in a variety of preclinical animal models for the treatment of pain and inflammatory diseases.
The neurotrophin/Trk pathway, particularly the BDNF/TrkB pathway, has also been implicated in the pathogenesis of neurodegenerative diseases, including multiple sclerosis, Parkinson’s disease, and Alzheimer’s disease. The modulating neurotrophic factor/Trk pathway can be used to treat these and related diseases.
It is believed that the TrkA receptor is critical for the disease process in the parasitic infection of Trypanosoma cruzi (Chagas disease) in human hosts. Therefore, TrkA inhibitors can be used to treat Chagas disease and related protozoal infections.
Trk inhibitors can also be used to treat diseases associated with imbalances in bone remodeling, such as osteoporosis, rheumatoid arthritis, and bone metastasis. Bone metastases are a common complication of cancer, up to 70% in patients with advanced breast or prostate cancer and about 15 in patients with lung, colon, stomach, bladder, uterine, rectal, thyroid or kidney cancer Up to 30%. Osteolytic metastases can cause severe pain, pathological fractures, life-threatening hypercalcemia, spinal cord compression, and other neurostress syndromes. For these reasons, bone metastases are a serious cancer complication that is costly. Therefore, an agent that can induce apoptosis of proliferating bone cells is very advantageous. Expression of the TrkA receptor and TrkC receptor has been observed in the osteogenic region of the fractured mouse model. In addition, almost all osteoblast apoptosis agents are very advantageous. Expression of the TrkA receptor and TrkC receptor has been observed in the osteogenic region of the fractured mouse model. In addition, localization of NGF was observed in almost all osteoblasts. Recently, it was demonstrated that pan-Trk inhibitors in human hFOB osteoblasts inhibit tyrosine signaling activated by neurotrophic factors that bind to all three Trk receptors. This data supports the theory of using Trk inhibitors to treat bone remodeling diseases, such as bone metastases in cancer patients.
Developed by Loxo Oncology, Larotrectinib (LOXO-101) is a broad-spectrum antineoplastic agent for all tumor patients expressing Trk, rather than tumors at an anatomical location. LOXO-101 chemical name is (S)-N-(5-((R)-2-(2,5-difluorophenyl)-pyrrolidin-1-yl)pyrazolo[1,5-a] Pyrimidin-3-yl)-3-hydroxypyrrolidine-1-carboxamide, the structural formula is as follows. LOXO-101 began treatment of the first patient in March 2015; on July 13, 2016, the FDA granted a breakthrough drug qualification for the inoperable removal or metastatic solid tumor of adults and children with positive Trk fusion gene mutations; Key entry was completed in February 2017; in November 2018, the FDA approved the listing under the trade name Vitrakvi.

Poor absorption, distribution, metabolism, and/or excretion (ADME) properties are known to be the primary cause of clinical trial failure in many drug candidates. Many of the drugs currently on the market also limit their range of applications due to poor ADME properties. The rapid metabolism of drugs can lead to the inability of many drugs that could be effectively treated to treat diseases because they are too quickly removed from the body. Frequent or high-dose medications may solve the problem of rapid drug clearance, but this approach can lead to problems such as poor patient compliance, side effects caused by high-dose medications, and increased treatment costs. In addition, rapidly metabolizing drugs may also expose patients to undesirable toxic or reactive metabolites.
Although LOXO-101 is effective as a Trk inhibitor in the treatment of a variety of cancers and the like, it has been found that a novel compound having a good oral bioavailability and a drug-forming property for treating a cancer or the like is a challenging task. Thus, there remains a need in the art to develop compounds having selective inhibitory activity or better pharmacodynamics/pharmacokinetics for Trk kinase mediated diseases useful as therapeutic agents, and the present invention provides such compounds.
SYN
WO 2018071447 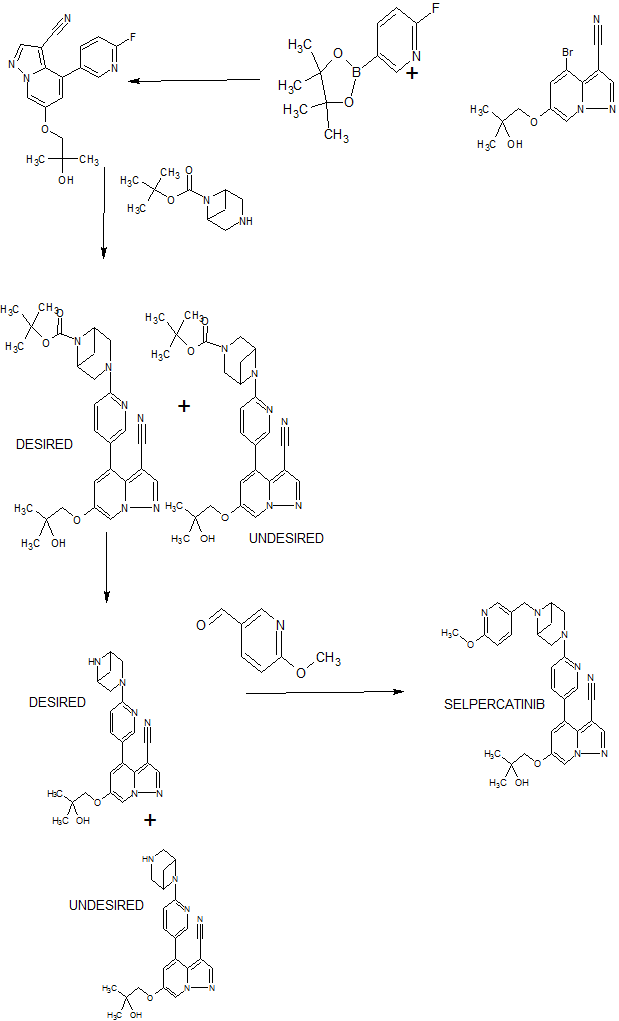 [0007] Accordingly, provided herein is a compound of Formula I-IV:

Novel deuterated analogs of pyrazolo[1,5-a]pyrimidine compounds, particularly selpercatinib , processes for their preparation and compositions comprising them are claimed. Also claims are their use for treating pain, inflammation, cancer and certain infectious diseases.