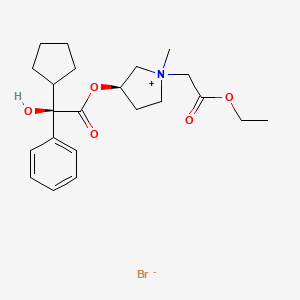 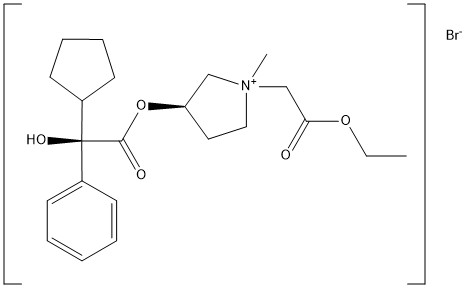 [0004] One glycopyrronium salt which is useful in certain medical applications is the following compound:

[0006] Certain processes for making glycopyrronium salts are known. However, these processes are not as safe, efficient, stereospecific, or stereoselective as the new processes disclosed herein, for example with respect to large-scale manufacturing processes. Certain publications show that higher anticholinergic activity is attributed to the 2R3’R configuration. However, to date, processes for making the 2R3’R isomers, as well as the 2R3’R1’R isomers are low yielding, involve too many reaction steps to be economically feasible, use toxic materials, and/or are not sufficiently stereospecific or stereoselective with respect to the products formed.

[0179] The below synthetic description refers to the numbered compounds illustrated in FIG. 2. Numbers which refer to these compounds in FIG. 2 are bolded and underlined in this Example.

[0181] R(-)-cyclopentylmandelic acid (compound 4) can be synthesized starting with

R(-)-mandelic acid (compound 1) according to Example 1.

[0183] R(-)-mandelic acid (1) was suspended in hexane and mixed with pivaldehyde and a catalytic amount of trifluoromethanesulfonic acid at room temperature to form a mixture. The mixture was warmed to 36 °C and then allowed to react for about 5 hours. The mixture was then cooled to room temperature and treated with 8% aqueous sodium bicarbonate. The aqueous layer was removed and the organic layer dried over anhydrous sodium sulfate. After filtration and removal of the solvent under vacuum, the crude product was recrystallized to give (5R)-2-(tert-butyl)-5-phenyl-l,3-dioxolan-4-one (compound 2) in 88% yield (per S-enantiomer yield).

[0185] Compound 2 was reacted with lithium hexamethyl disilazide (LiHMDS) in hexane at -78 °C under stirring for one hour. Next, cyclopentyl bromide was added to the reaction mixture including compound 2 and LiHMDS . The reaction was kept cool for about four (4) hours and then slowly warmed to room temperature and allowed to react for at least twelve (12) more hours. The resulting mixture was then treated with 10% aqueous ammonium chloride. The aqueous layer was discarded and the organic layer dried over anhydrous sodium sulfate. The solvent was removed under vacuum and the residue recrystallized from hexane to give pure product (5R)-2-(tert-butyl)-5-cyclopentyl-5-phenyl- l,3-dioxolan-4-one (3) in 63% yield (per S-enantiomer yield).

[0187] R(-)-cyclopentylmandelic acid (compound 4) was prepared by providing compound 3 in aqueous methanolic potassium hydroxide at 65 °C for four hours. After cooling this mixture to room temperature and removing the methanol under vacuum, the aqueous solution was acidified with aqueous hydrochloric acid. The aqueous solution was then extracted twice with ethyl acetate and the organic phase dried with anhydrous sodium sulfate. After removing the solvent and performing a recrystallization, pure R(-)- cyclopentylmandelic acid (compound 4) was obtained in 62% yield (based on S-enantiomer yield).

[0194] The glycopyrrolate base, compound 8, was treated in dry acetonitrile with methyl bromoacetate at room temperature under stirring for three (3) hours. The crude product was dissolved in a small volume of methylene chloride and poured into dry ethyl ether to obtain a precipitate. This procedure was repeated three times to provide (3R)-3-((R)- 2-cyclopentyl-2-hydroxy-2-phenylacetoxy)-l -(2-ethoxy-2-oxoethyl)-l-methylpyrrolidin-l – ium bromide, also known as 3′(R)-[R-Cyclopentylphenylhydroxyacetoy]- -ethyl- l ‘methoxycarbonylpyrrolidinium bromide (compound 9) in 89% yield. Compound 9 included the following stereoisomers: 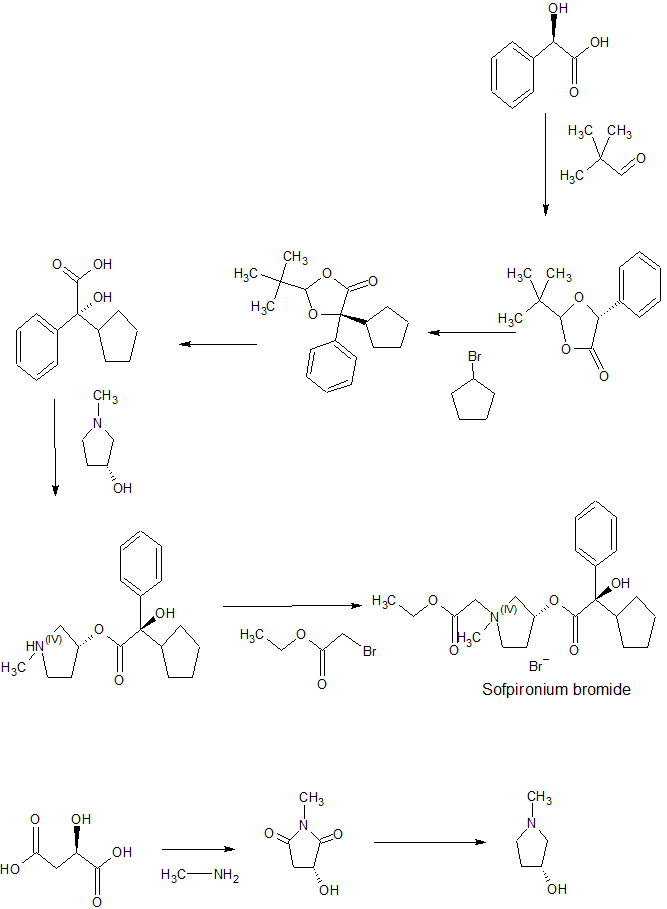