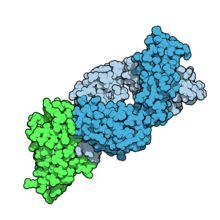 Tremelimumab (formerly ticilimumab, CP-675,206) is a fully human monoclonal antibody against CTLA-4. It is an immune checkpoint blocker. Previously in development by Pfizer,[1] it is now in investigation by MedImmune, a wholly owned subsidiary of AstraZeneca.[2] It has been undergoing human trials for the treatment of various cancers but has not attained approval for any.

Approval based on HIMALAYA Phase III trial results which showed single priming dose of Imjudo added to Imfinzi reduced risk of death by 22% vs. sorafenib

AstraZeneca’s Imjudo (tremelimumab) in combination with Imfinzi (durvalumab) has been approved in the US for the treatment of adult patients with unresectable hepatocellular carcinoma (HCC), the most common type of liver cancer. The novel dose and schedule of the combination, which includes a single dose of the anti-CTLA-4 antibody Imjudo 300mg added to the anti-PD-L1 antibody Imfinzi 1500mg followed by Imfinzi every four weeks, is called the STRIDE regimen (Single Tremelimumab Regular Interval Durvalumab).

The approval by the US Food and Drug Administration (FDA) was based on positive results from the HIMALAYA Phase III trial. In this trial, patients treated with the combination of Imjudo and Imfinzi experienced a 22% reduction in the risk of death versus sorafenib (based on a hazard ratio [HR] of 0.78, 95% confidence interval [CI] 0.66-0.92 p=0.0035).1 Results were also published in the New England Journal of Medicine Evidence showing that an estimated 31% of patients treated with the combination were still alive after three years, with 20% of patients treated with sorafenib still alive at the same duration of follow-up.2

Liver cancer is the third-leading cause of cancer death and the sixth most commonly diagnosed cancer worldwide.3,4 It is the fastest rising cause of cancer-related deaths in the US, with approximately 36,000 new diagnoses each year.5,6

Ghassan Abou-Alfa, MD, MBA, Attending Physician at Memorial Sloan Kettering Cancer Center (MSK), and principal investigator in the HIMALAYA Phase III trial, said: “Patients with unresectable liver cancer are in need of well-tolerated treatments that can meaningfully extend overall survival. In addition to this regimen demonstrating a favourable three-year survival rate in the HIMALAYA trial, safety data showed no increase in severe liver toxicity or bleeding risk for the combination, important factors for patients with liver cancer who also have advanced liver disease.”

Dave Fredrickson, Executive Vice President, Oncology Business Unit, AstraZeneca, said: “With this first regulatory approval for Imjudo, patients with unresectable liver cancer in the US now have an approved dual immunotherapy treatment regimen that harnesses the potential of CTLA-4 inhibition in a unique combination with a PD-L1 inhibitor to enhance the immune response against their cancer.”

Andrea Wilson Woods, President & Founder, Blue Faery: The Adrienne Wilson Liver Cancer Foundation, said: “In the past, patients living with liver cancer had few treatment options and faced poor prognoses. With today’s approval, we are grateful and optimistic for new, innovative, therapeutic options. These new treatments can improve long-term survival for those living with unresectable hepatocellular carcinoma, the most common form of liver cancer. We appreciate the patients, their families, and the broader liver cancer community who continue to fight for new treatments and advocate for others.”

The safety profiles of the combination of Imjudo added to Imfinzi and for Imfinzi alone were consistent with the known profiles of each medicine, and no new safety signals were identified.

Regulatory applications for Imjudo in combination with Imfinzi are currently under review in Europe, Japan and several other countries for the treatment of patients with advanced liver cancer based on the HIMALAYA results.

Liver cancer
About 75% of all primary liver cancers in adults are HCC.3 Between 80-90% of all patients with HCC also have cirrhosis.7 Chronic liver diseases are associated with inflammation that over time can lead to the development of HCC.7

More than half of patients are diagnosed at advanced stages of the disease, often when symptoms first appear.8 A critical unmet need exists for patients with HCC who face limited treatment options.8 The unique immune environment of liver cancer provides clear rationale for investigating medications that harness the power of the immune system to treat HCC.8

The trial included a total of 1,324 patients with unresectable, advanced HCC who had not been treated with prior systemic therapy and were not eligible for locoregional therapy (treatment localised to the liver and surrounding tissue).

The trial was conducted in 181 centres across 16 countries, including in the US, Canada, Europe, South America and Asia. The primary endpoint was overall survival (OS) for the combination versus sorafenib and key secondary endpoints included OS for Imfinzi versus sorafenib, objective response rate and progression-free survival (PFS) for the combination and for Imfinzi alone.

Imfinzi
Imfinzi (durvalumab) is a human monoclonal antibody that binds to the PD-L1 protein and blocks the interaction of PD-L1 with the PD-1 and CD80 proteins, countering the tumour’s immune-evading tactics and releasing the inhibition of immune responses.

Imfinzi was recently approved to treat patients with advanced biliary tract cancer in the US based on results from the TOPAZ-1 Phase III trial. It is the only approved immunotherapy in the curative-intent setting of unresectable, Stage III non-small cell lung cancer (NSCLC) in patients whose disease has not progressed after chemoradiotherapy and is the global standard of care in this setting based on the PACIFIC Phase III trial.

Imfinzi is also approved in the US, EU, Japan, China and many other countries around the world for the treatment of extensive-stage small cell lung cancer (ES-SCLC) based on the CASPIAN Phase III trial. In 2021, updated results from the CASPIAN trial showed Imfinzi plus chemotherapy tripled patient survival at three years versus chemotherapy alone.

Since the first approval in May 2017, more than 100,000 patients have been treated with Imfinzi.

As part of a broad development programme, Imfinzi is being tested as a single treatment and in combinations with other anti-cancer treatments for patients with SCLC, NSCLC, bladder cancer, several gastrointestinal (GI) cancers, ovarian cancer, endometrial cancer, and other solid tumours.

Beyond HIMALAYA, Imjudo is being tested in combination with Imfinzi across multiple tumour types including locoregional HCC (EMERALD-3), SCLC (ADRIATIC) and bladder cancer (VOLGA and NILE).

Imjudo is also under review by global regulatory authorities in combination with Imfinzi and chemotherapy in 1st-line metastatic NSCLC based on the results of the POSEIDON Phase III trial, which showed the addition of a short course of Imjudo to Imfinzi plus chemotherapy improved both overall and progression-free survival compared to chemotherapy alone.

AstraZeneca in GI cancers
AstraZeneca has a broad development programme for the treatment of GI cancers across several medicines spanning a variety of tumour types and stages of disease. In 2020, GI cancers collectively represented approximately 5.1 million new diagnoses leading to approximately 3.6 million deaths.9

Within this programme, the Company is committed to improving outcomes in gastric, liver, biliary tract, oesophageal, pancreatic, and colorectal cancers.

Imfinzi (durvalumab) is being assessed in combinations in oesophageal and gastric cancers in an extensive development programme spanning early to late-stage disease across settings.

The Company aims to understand the potential of Enhertu (trastuzumab deruxtecan), a HER2-directed antibody drug conjugate, in the two most common GI cancers, colorectal and gastric cancers. Enhertu is jointly developed and commercialised by AstraZeneca and Daiichi Sankyo.

Lynparza (olaparib) is a first-in-class PARP inhibitor with a broad and advanced clinical trial programme across multiple GI tumour types including pancreatic and colorectal cancers. Lynparza is developed and commercialised in collaboration with MSD (Merck & Co., Inc. inside the US and Canada).

AstraZeneca in immuno-oncology (IO)
Immunotherapy is a therapeutic approach designed to stimulate the body’s immune system to attack tumours. The Company’s immuno-oncology (IO) portfolio is anchored in immunotherapies that have been designed to overcome evasion of the anti-tumour immune response. AstraZeneca is invested in using IO approaches that deliver long-term survival for new groups of patients across tumour types.

The Company is pursuing a comprehensive clinical trial programme that includes Imfinzi as a single treatment and in combination with Imjudo (tremelimumab) and other novel antibodies in multiple tumour types, stages of disease, and lines of treatment, and where relevant using the PD-L1 biomarker as a decision-making tool to define the best potential treatment path for a patient.

In addition, the ability to combine the IO portfolio with radiation, chemotherapy, and targeted small molecules from across AstraZeneca’s oncology pipeline, and from research partners, may provide new treatment options across a broad range of tumours.

AstraZeneca in oncology
AstraZeneca is leading a revolution in oncology with the ambition to provide cures for cancer in every form, following the science to understand cancer and all its complexities to discover, develop and deliver life-changing medicines to patients.

The Company’s focus is on some of the most challenging cancers. It is through persistent innovation that AstraZeneca has built one of the most diverse portfolios and pipelines in the industry, with the potential to catalyse changes in the practice of medicine and transform the patient experience.

AstraZeneca has the vision to redefine cancer care and, one day, eliminate cancer as a cause of death.

Tremelimumab aims to stimulate an immune system attack on tumors. Cytotoxic T lymphocytes (CTLs) can recognize and destroy cancer cells. However, there is also an inhibitory mechanism (immune checkpoint) that interrupts this destruction. Tremelimumab turns off this inhibitory mechanism and allows CTLs to continue to destroy the cancer cells.[3] This is immune checkpoint blockade.

Tremelimumab binds to the protein CTLA-4, which is expressed on the surface of activated T lymphocytes and inhibits the killing of cancer cells. Tremelimumab blocks the binding of the antigen-presenting cell ligands B7.1 and B7.2 to CTLA-4, resulting in inhibition of B7-CTLA-4-mediated downregulation of T-cell activation; subsequently, B7.1 or B7.2 may interact with another T-cell surface receptor protein, CD28, resulting in a B7-CD28-mediated T-cell activation unopposed by B7-CTLA-4-mediated inhibition.

Unlike Ipilimumab (another fully human anti-CTLA-4 monoclonal antibody), which is an IgG1 isotype, tremelimumab is an IgG2 isotype.[4][5]

Phase 1 and 2 clinical studies in metastatic melanoma showed some responses.[6] However, based on early interim analysis of phase III data, Pfizer designated tremelimumab as a failure and terminated the trial in April 2008.[1][7]

However, within a year, the survival curves showed separation of the treatment and control groups.[8] The conventional Response Evaluation Criteria in Solid Tumors (RECIST) may underrepresent the merits of immunotherapies. Subsequent immunotherapy trials (e.g. ipilimumab) have used the Immune-Related Response Criteria (irRC) instead.

Although it was designated in April 2015 as orphan drug status in mesothelioma,[9] tremelimumab failed to improve lifespan in the phase IIb DETERMINE trial, which assessed the drug as a second or third-line treatment for unresectable malignant mesothelioma.[10][11]

In a phase III trial, AstraZeneca paired tremelimumab with a PD-L1 inhibitor, durvalumab, for the first-line treatment of non-small cell lung cancer.[12] The trial was conducted across 17 countries, and in July 2017, AstraZeneca announced that it had failed to meet its primary endpoint of progression-free survival.[13]