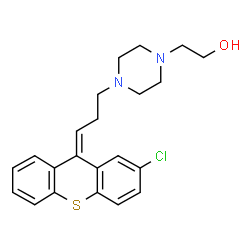 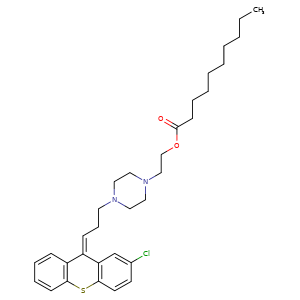 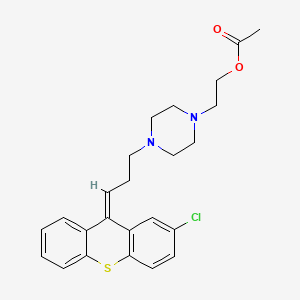 It is also used in the treatment of acute bipolar mania.

As a long-acting injection, zuclopenthixol decanoate comes in a 200 mg and 500 mg ampoule. Doses can vary from 50 mg weekly to the maximum licensed dose of 600 mg weekly. In general, the lowest effective dose to prevent relapse is preferred. The interval may be shorter as a patient starts on the medication before extending to 3 weekly intervals subsequently. The dose should be reviewed and reduced if side effects occur, though in the short-term an anticholinergic medication benztropine may be helpful for tremor and stiffness, while diazepam may be helpful for akathisia. 100 mg of zuclopenthixol decanoate is roughly equivalent to 20 mg of flupentixol decanoate or 12.5 mg of fluphenazine decanoate.

In acutely psychotic and agitated inpatients, 50 – 200 mg of zuclopenthixol acetate may be given for a calming effect over the subsequent three days, with a maximum dose of 400 mg in total to be given. As it is a long-acting medication, care must be taken not to give an excessive dose.

Chronic administration of zuclopenthixol (30 mg/kg/day for two years) in rats resulted in small, but significant, increases in the incidence of thyroid parafollicular carcinomas and, in females, of mammary adenocarcinomas and of pancreatic islet cell adenomas and carcinomas. An increase in the incidence of mammary adenocarcinomas is a common finding for D2 antagonists which increase prolactin secretion when administered to rats. An increase in the incidence of pancreatic islet cell tumours has been observed for some other D2 antagonists. The physiological differences between rats and humans with regard to prolactin make the clinical significance of these findings unclear.

Withdrawal syndrome: Abrupt cessation of therapy may cause acute withdrawal symptoms (eg, nausea, vomiting, or insomnia). Symptoms usually begin in 1 to 4 days of withdrawal and subside within 1 to 2 weeks.[1][2]

Other permanent side effects are similar to many other typical antipsychotics, namely extrapyramidal symptoms as a result of dopamine blockade in subcortical areas of the brain. This may result in symptoms similar to those seen in Parkinson’s disease and include a restlessness and inability to sit still known as akathisia, a slow tremor and stiffness of the limbs.[8] Zuclopenthixol is thought to be more sedating than the related flupentixol, though possibly less likely to induce extrapyramidal symptoms than other typical depots.[5] As with other dopamine antagonists, zuclopenthixol may sometimes elevate prolactin levels; this may occasionally result in amenorrhoea or galactorrhoea in severe cases. Neuroleptic malignant syndrome is a rare but potentially fatal side effect. Any unexpected deterioration in mental state with confusion and muscle stiffness should be seen by a physician. 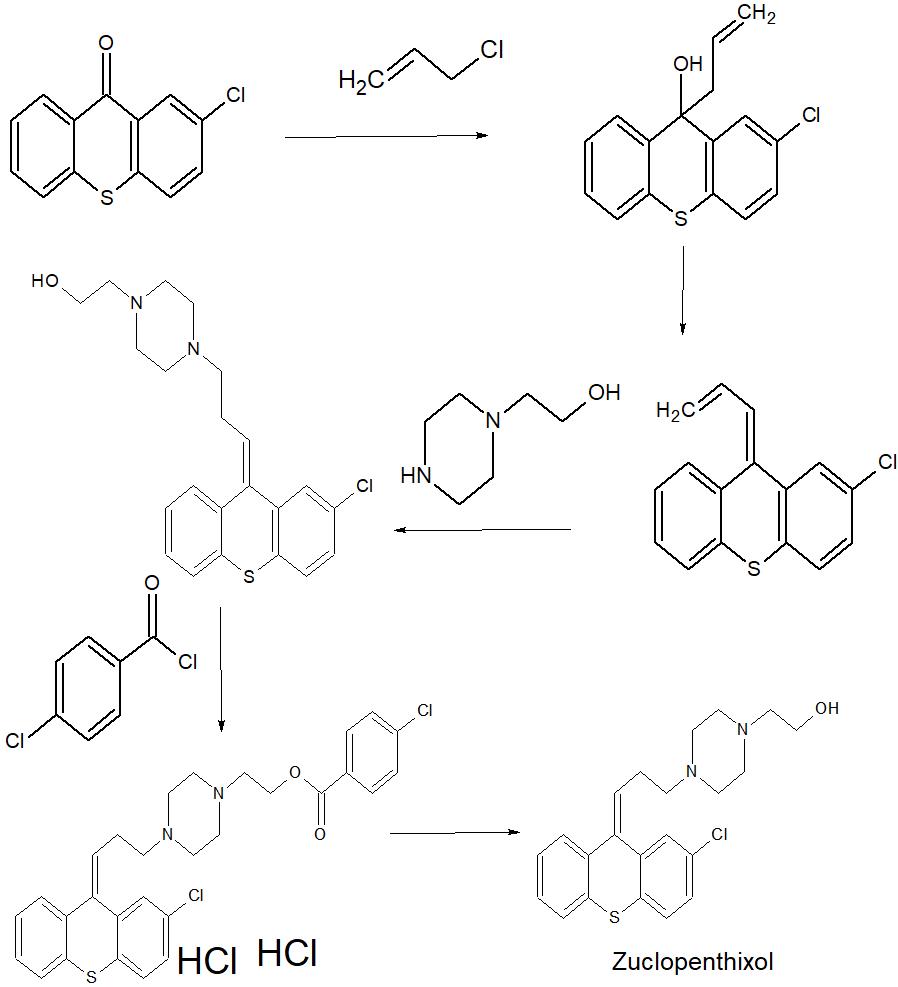 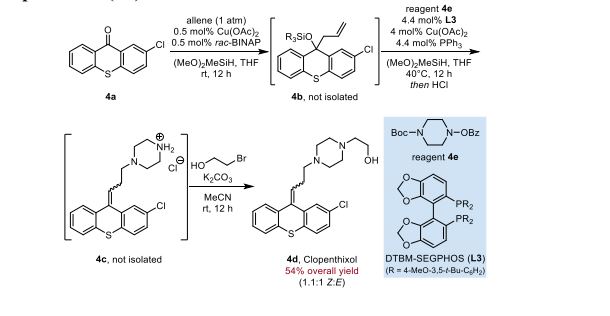 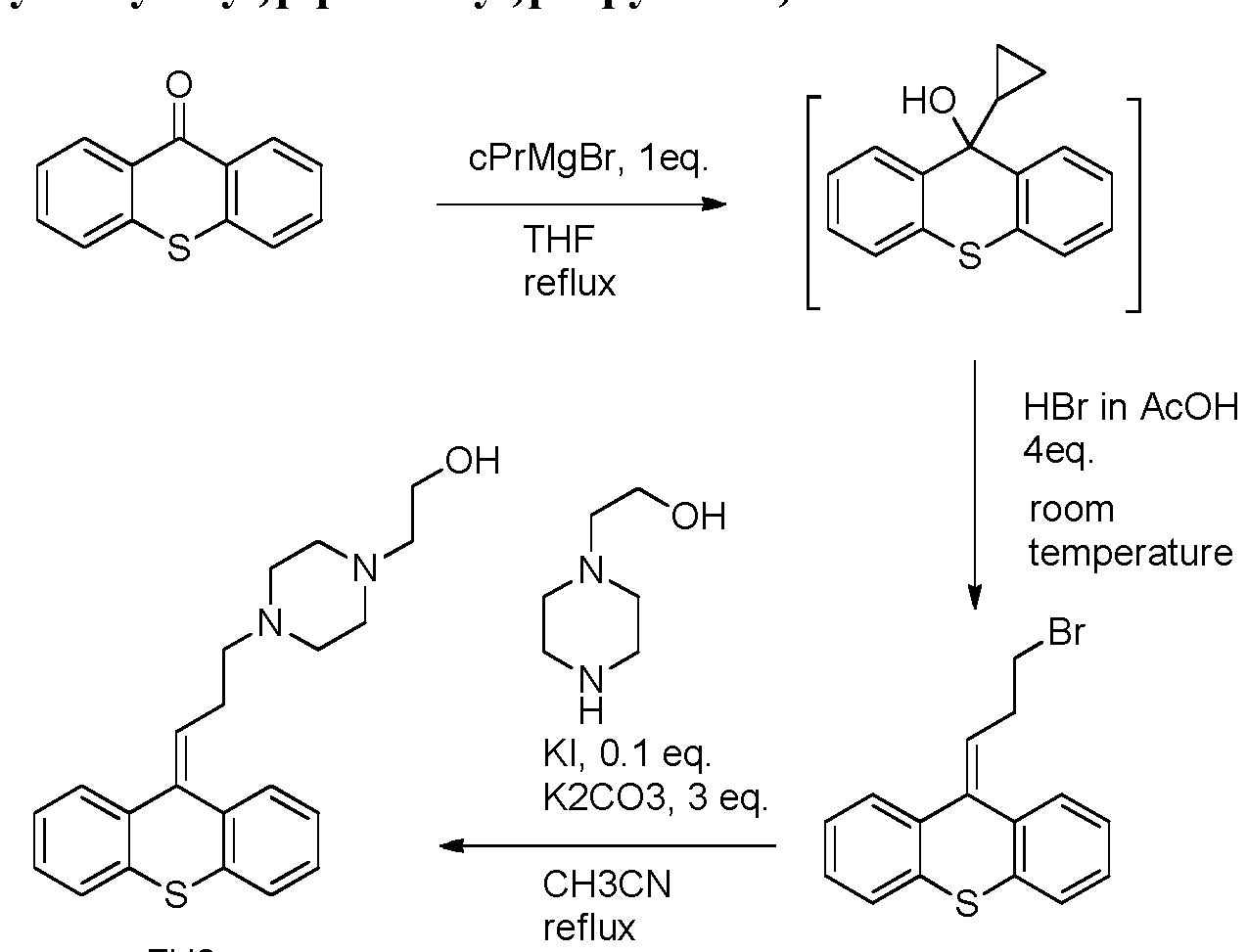 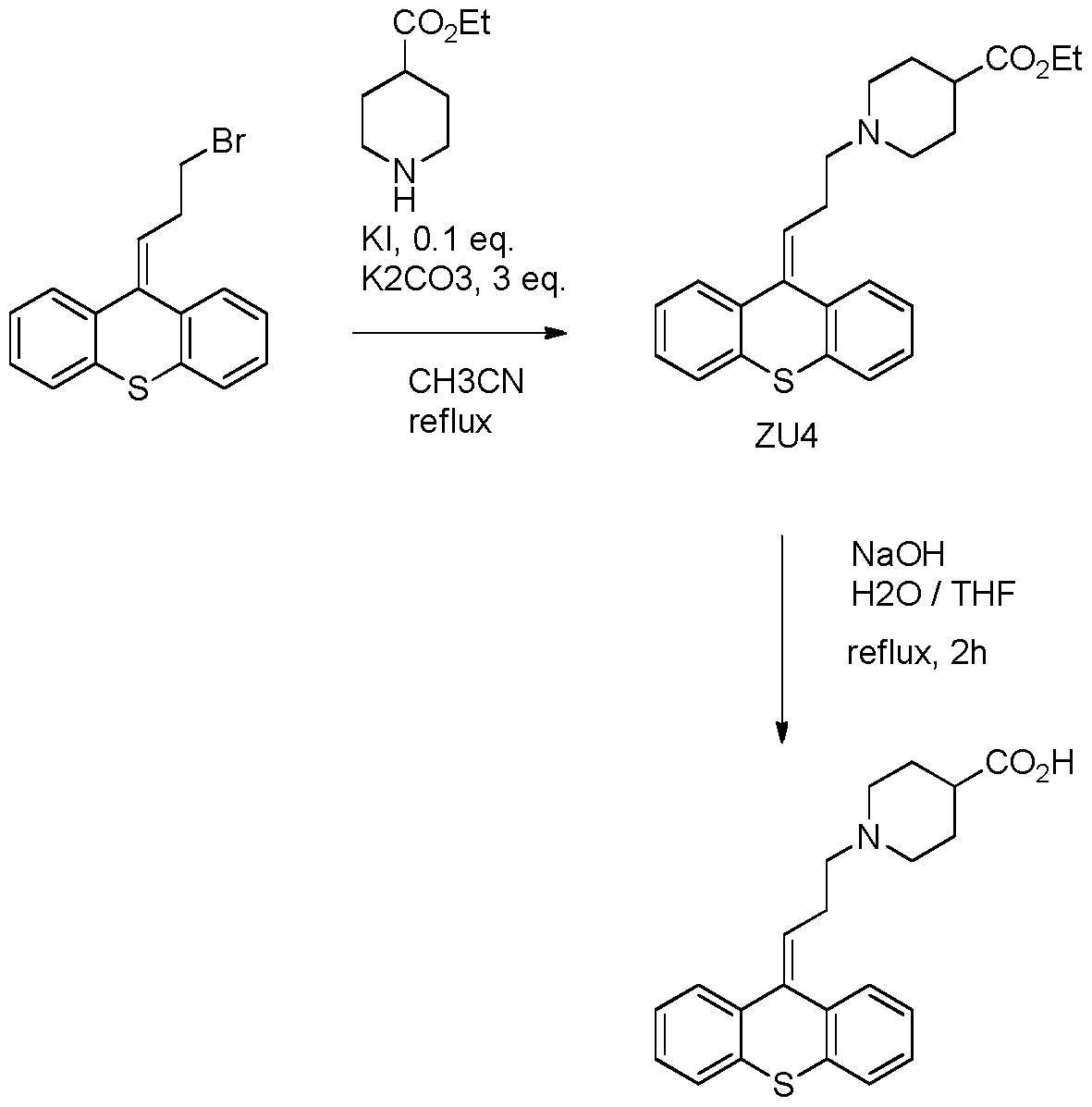 To a solution of 9-(3-bromopropylidene)thioxanthene in acetonitrile at reflux was added N-ethylacetate piperidine (1,5 eq.), potassium iodide (0.1 eq.) and potassium carbonate (3 eq.). The mixture was stirred at reflux then concentrated in vacuo and purified by silica gel column chromatography to afford ZU4 as a brown oil with a purity of 97% in HPLC analysis HPLC analysis (BEH C18 type, mobile phase: H20/acetonitrile (HCOOH 0.1%)) : tR = 2.07 min.
The compound ZU4 was stirred during 2 hours at reflux in a mixture of THF and a solution of NaOH in water. After phase separation, the aqueous layer was extracted twice by diethyl ether. The global organic layer was, then, washed by a saturated solution of NaCl, dried over MgSC^, filtered and concentrated in vacuo to afford ZUf HPLC analysis (BEH CI 8 type, mobile phase: H20/acetonitrile (HCOOH 0.1%)) : tR = 2.24 min.
Preparation of ZU5:
(Z)-2-(4-(3-(2-chloro-9H-thioxanthen-9-ylidene)propyl)piperazin-l-yl)ethylacetate 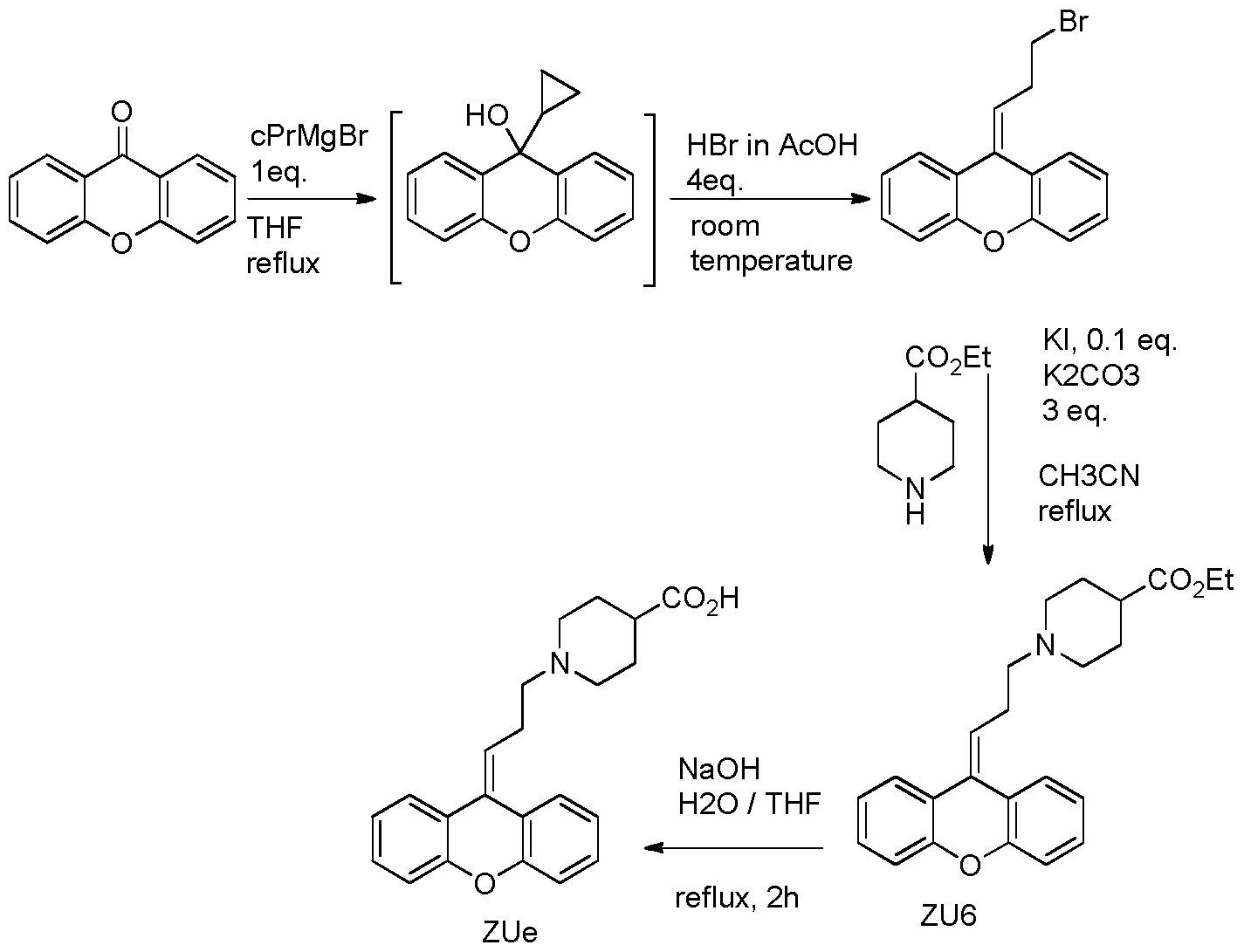 To a solution of 9-oxoxanthene (1.0 equiv.) in THF at reflux were added a solution of cyclopropylmagnesium bromide in THF (1.0 equiv.) and stirred during 2 hours. The mixture was cooled down at room temperature and a solution of hydrogen bromide in acetic acid (4 eq.) was added and stirred at room temperature. The reaction mixture was concentrated in vacuo and purified by silica gel column chromatography to obtain 9- (3bromopropylidene)-oxoxanthene.
Then, to a solution of 9-(3bromopropylidene)-oxoxanthene in acetonitrile at reflux was added Ethyl 4-piperidinecarboxylate (1,5 eq.), potassium iodide (0.1 eq.) and potassium carbonate (3 eq.). The mixture was stirred at reflux then concentrated in vacuo and purified by silica gel column chromatography to obtain ZU6 ZU6 is then dissolved in a mixture of THF and a solution of NaOH in water. After phase separation, the aqueous layer was extracted twice by diethyl ether. The global organic layer was, then, washed by a saturated solution of NaCl, dried over MgSC^, filtered and concentrated in vacuo to afford ZUe as a white solid with a purity up to 97% in HPLC. Preparation of ZUc:
(Z)-2-(4-(3-(2-(trifluoromethyl)-9H-thioxanthen-9-ylidene)propyl)piperazin-l-yl) ethanamine

To a solution of ZU1 (2-[4-[3-[2-(trifiuoromethyl)thioxanthen-9- ylidene]propyl]piperidin-l-yl] ethanol) (leq.) in THF was added diethylazodicarboxylate, phtalimide and triphenylphosphine. The solution was stirred at room temperature during 3 hours and then concentrated in vacuo. The crude oil was then dissolved in ethanol, hydrazine was added and the mixture was stirred at reflux during 2 hours. The crude product obtained after concentration was purified via a reversed phase chromatography using HCI as buffer to afford the compound ZUc as an hydrochloride salt (orange solid). [M+H]+ (ESI+) : 434. HPLC analysis (BEH C18 type, mobile phase: H20/acetonitrile (HCOOH 0.1%)): tR = 2.04 min Preparation of ZUd: 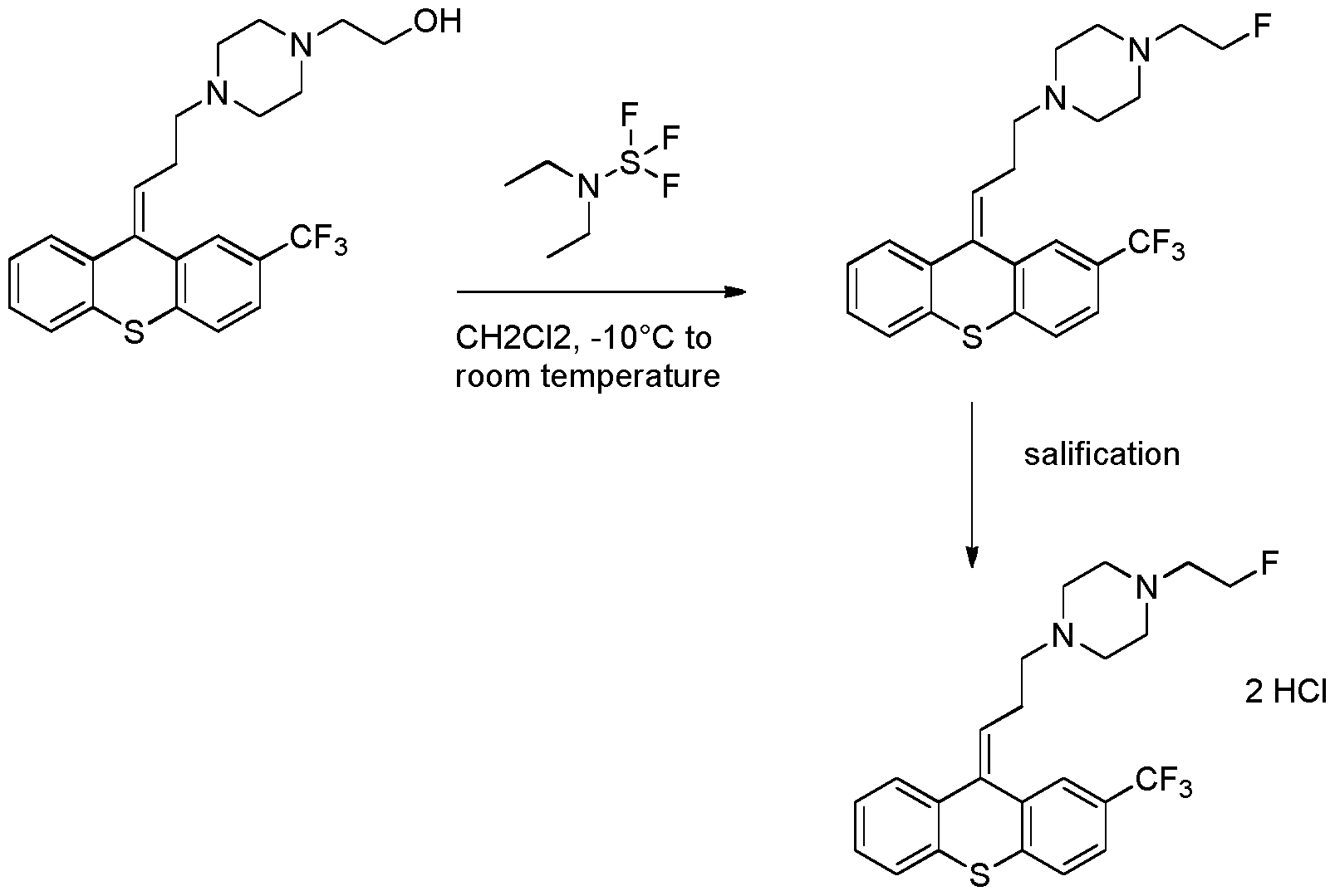 To a solution of flupenthixol in dichloromethane was added at -10°C diethylamino sulfur trifluoride. The mixture was then stirred at room temperature. The crude product was purified via a reversed phase chromatography using HC1 as buffer to afford the compound ZUd as a hydrochloride salt (orange solid) with 97% purity in HPLC. HPLC analysis (BEH C18 type, mobile phase: H20/acetonitrile (HCOOH 0.1%)): tR = 3.59 min. 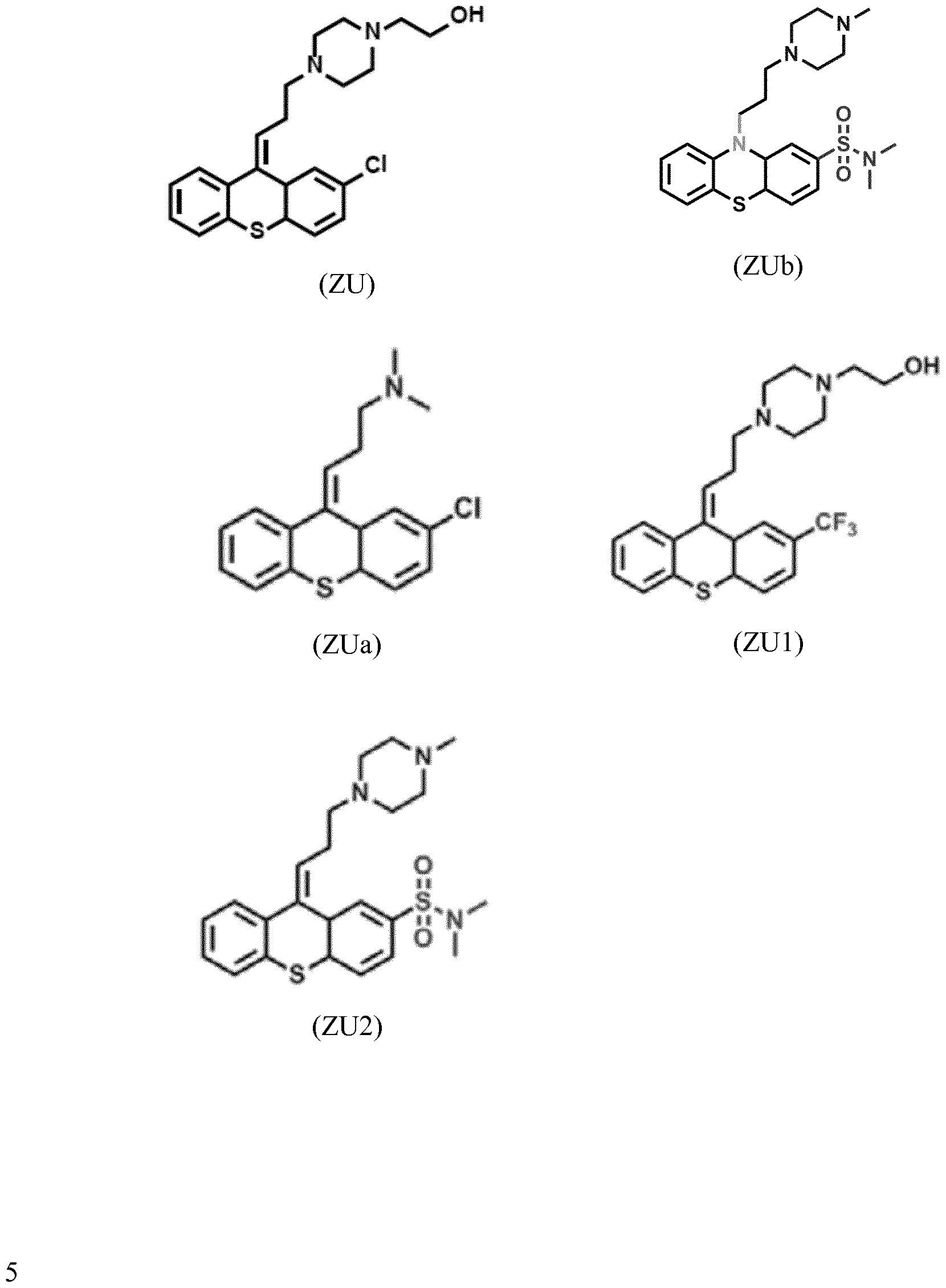 Zuclopenthixol antagonises both dopamine D1 and D2 receptors, α1-adrenoceptors and 5-HT2 receptors with a high affinity, but has no affinity for cholinergic muscarine receptors. It weakly antagonises the histamine (H1) receptor but has no α2-adrenoceptor blocking activity[citation needed].

Zuclopenthixol was introduced by Lundbeck in 1978.[22]