September 7, 2016Flow chemistry, FLOW SYNTHESISComments: 0
It's only fair to share...

The same catalytic packed-bed reactor was used for the preparation of (S)-warfarin 107 under continuous flow conditions (Scheme ).A solution of 4-OH-coumarin 104, benzalacetone105, and trifluoroacetic acid as a cocatalyst in dioxane was flowed into the reactor containing the polystyrene-supported 9-amino-epi-quinine 122. With a residence time of 5 h at 50 °C, we were able to isolate the product in up to 90% yield and up to 87% ee. Further studies are needed in order to optimize the reaction under continuous flow conditions; however, the proposed protocol already offers the possibility to extend catalyst’s lifetime, longer than in batch mode, further suggesting interesting future applications for the catalytic reactors.

The Pericàs group published the stereoselective Michael addition of ethyl nitroacetate to benzalacetone promoted by polystyrene-supported 9-amino-9-deoxy-epi-quinine 126 under continuous flow conditions. It should be pointed out that the polystyrene in our hands is a highly reticulated, insoluble polymer, while the polystyrene used by the Pericàs group is a swelling resin; a careful choice of the reaction solvent should be done, as this may affect the reaction course. The functionalized resin was packed into a Teflon tube between two plugs of glass wool. The reaction was run by pumping a solution of the two reagents and benzoic acid as a cocatalyst in CHCl3 (chosen after careful solvent screening) at 30 °C for 40 min residence time. Notably, 3.6 g (12.9 mmol) of the desired adducts were collected in 21 h of operation in roughly 1/1 dr and 97/98% ee. 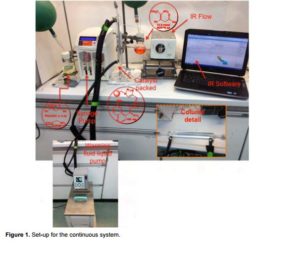 A polystyrene (PS)-supported 9-amino(9-deoxy)epi quinine derivative catalyzes Michael reactions affording excellent levels of conversion and enantioselectivity using different nucleophiles and structurally diverse enones. The highly recyclable, immobilized catalyst has been used to implement a single-pass, continuous flow process (residence time: 40 min) that can be operated for 21 hours without significant decrease in conversion and with improved enantioselectivity with respect to batch operation. The flow process has also been used for the sequential preparation of a small library of enantioenriched Michael adducts.

There are 3 types of Warfarin:

As there are different types different synthetic routes are required. Firstly, looking at the racemic Warfarin followed by the asymetric Warfarin (S- and R- Warfarin).

The usual synthetic route for racemic Warfarin involves a base/acid catalysed Michael condensation reaction of 4-hydroxycoumarin with benzalacetone. These reactants are either refluxed in water for approximately 4-8 hours or refluxed with pyridine which gives a saturated yield. The mechanism is shown below:

The yield when this reaction is reflux with water is 48%.

During recent years it has been found that one of the possible enantiomers usually has a pharmacological profile that is superior to the racemate. Hence pharmaceutical companies have been replacing exisiting racemic drugs with their pure enantiomeric form.

In the case of Warfarin it was found that S-Warfarin is the superior enantiomer being 6 times more active than R-Warfarin. There are 2 main methods to form a pure enantiomeric form of Warfarin.

1. Asymmetric hydrogenation: This was developed by DuPont Merk Pharmaceutical. It involves the a DuPHOS-Rh(I) catalysed hydrogenation of racemic Warfarin to give the desired enantiomer. Below is the reaction scheme for this synthesis:

This exclusive product is then used in the rest of the synthesis. First reacting it with NaOH to form the sodium salt of the product:

This route gives enantioselectivities of 82-86% e.e in methanol and 88% e.e in 3:2 isopropanol-methanol. Acidification and a single recrystallisation of the crude product gave R- and S- Warfarin in >98% e.e.

2. Hetero-Diels-Alder cycloaddition: This method was developed in 2001 and the key feature is that it does not use racemic Warfarin as a starting material. Instead it involves a hetero-Diels-Alder cycloaddition of a iso-propenyl ether to 4-hydroxycoumarin (via the use of dry dioxane and a Tietze Base with 5A Molecular sieves at a temperature of 80ºC):

Here S-Warfarin has been synthesised with an e.e of 95%. The structure of Warfarin

Warfarin is optically active, and from the time of it’s discovery it was recognised that the two enantiomers were clinically different in their effect as a drug. So establishing the absolute configuration of the two isomers was a priority.

The stereochemical assignment of (−)-(S)-warfarin was initially achieved by relating it to (−)-(R)-beta-phenylcaproic acid through a series of reactions not involving the asymmetric center {B.D.West, S.Preis, C.H.Schroder, & K.P.Link, J.Amer.Chem.Soc.,1961,83, 2676}. This assignment was confirmed by a determination of the crystal and molecular structure, and using the anomalous scattering of oxygen, and absolute configuration of (−)-(S)-Warfarin was measured {E.J.Valente, W.F.Trager and L.H.Jensen, Acta Cryst. 1975. B31, 954}.

The primary feature of the structure of (−)-warfarin is the hemiketal ring formed by cyclization of the side-chain keto function and the phenolic hydroxyl in the 4 position of the coumarin ring system. The crystal structure of racemic warfarin has the same feature. In solution n.m.r. spectra shows that the hemiketal is present in acetone solution.

The hemiketal bonding is rather weak. Thus the bond lengths within the hemiketal show that the atoms retain some of the characteristic of an open side chain keto group.

In the open chain keto form warfarin has two isomers, R andS, however the hemiketal introduces a second assymmetric center, so that we can have RR,SS, RS, and SR forms. The crystal structure determination favoured the SS enantiomer in the crystal studied.

It is evident that we are dealing with a very complex system indeed; the presence of the hemiketal adds four more enantiomers to the complexity pot. Recent work has unravelled some more of the mechanisms behind the Vitamin K1 antagonism of Warfarin.

Preparation of Coumarins: the Pechmann Condensation

With R1=OH we have 4-hydroxycoumarin, the starting material for the preparation of Warfarin

The reaction is also catalysed by the presence of a Lewis acid such aluminium(III) chloride or other strong Brönstedt acids such as methanesulphonic acid to form a coumarin. The acid catalyses trans-esterification as well as keto-enol tautomerisation.

Solid acid catalysts with the H+ attached to the polymer surface such as Nafion 417 or Amberlyst IR120 can be used. Thus resorcinol reacts with ethyl acetoacetate in boiling toluene in the presence of Nafion sheet to form the coumarin 7-hydroxy-4-methylcoumarin. This preparation forms the basis of a student organic chemistry experiment at Penn State University. In this case the coumarin, {also named, 7-hydroxy-4-methyl-2H-benzo[b]-pyran-2-one} is not a blood thinner but is a drug used in bile therapy, Hymecromone. The material is also, in highly purified form a laser dye, and the starting material for some insecticides!

The Preparation of Warfarin

The enantioselective synthesis of drugs is of fundamental importance in the pharmaceutical industry. In this experiment, students synthesize either enantiomer of warfarin, a widely used anticoagulant, in a single step from inexpensive starting materials. Stereoselectivity is induced by a commercial organocatalyst, (R,R)- or (S,S)-1,2-diphenylethylenediamine. The environmentally friendly microscale reaction is performed at ambient temperature, and the product can be purified by recrystallization or column chromatography. Product characterization includes thin-layer chromatography, NMR spectroscopy, and polarimetry. {T.C.Wong, C.M.Sultana and D.A.Vosburg, Department of Chemistry, Harvey Mudd College, Claremont, California 91711, J. Chem. Educ., 2010, 87(2), 194}

The Biochemistry of Warfarin Action

This is a complex biochemical and medical subject, certainly beyond the simple chemistry required for a molecule of the month! Warfarin acts as a Vitamin K antagonist, that is it blocks the action of vitamin K epoxide reductase.

This vitamin is found in brassicas, spinach, parsley, and other green vegetables, avocado pairs are also rich in Vitamin K1.

For Vitamin K2, n signifies a number of five-carbon side chain units, hence MK-n, and except for MK4, is synthesised by gut bacteria. Both vitamins are fat soluble, the “K” deriving from the German “koagulation”. German researchers discovered the K vitamins, and that they are involved in blood clotting. Vitamin K is a cofactor in the synthesis of blood clotting factors II, VII, IX and X*, this step occurs in the liver and involves the gammacarboxylation of the first 10 glutamic acid residues in the amino-terminal region of the prothrombin clotting factor to generategamma-carboxyglutamate. The gamma-carboxyglutamatee amino acid groups can chelate Ca2+ better than ten replaced glutamate residues, thus providing binding sites for four Vitamin Ks onto the phospholipid membrane during coagulation. The clotting occurs via a cascade*, a kind of biochemical chain reaction. {See Biochemistry by Stryer for the terminology} To work, the Vitamin K must be reduced to its quinol or hydroquinone form. This is achieved with Vitamin K Oxide reductase, which is the step inhibited by S-warfarin, being some three times more potent than R-warfarin. S-warfarin is metabolized primarily by the CYP2C9 enzyme of the cytochrome P450 system. The R-warfarin is metabolized by the two cytochrome P450 enzymes, CP1A4Y and CYP3A4. Warfarin is very soluble in water, and is absorbed into the blood stream within 90 minutes of taking the pills.

So far as the enantiomers are concerned, racaemic warfarin has a half life of around 40 hours, the two enantiomers, having half lives: R-warfarin, 45 hours; S-warfarin, 29 hours.

During my review for MoTM, necessarily hurried, I have not been able to find out if the hemiketal, with the four enantiomers is involved. That the hemiketal is weak is shown by the crystal structure study, so, in any case these enantiomers will have short half lives. It all adds to the complexity.

The relationship between the dose of warfarin and the response is modified by genetic and environmental factors that can influence the absorption of warfarin, its pharmacokinetics, and its pharmacodynamics.

An application of an asymmetric synthesis with a DuPhos ligand is the hydrogenation of dehydrowarfarin to warfarin:[9]