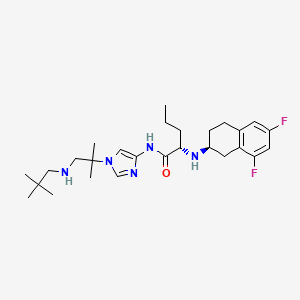 orphan drug designation in June 2018 for the treatment of desmoid tumors, and with a fast track designation

Nirogacestat is a selective gamma secretase (GS) inhibitor with potential antitumor activity. Nirogacestat binds to GS, blocking proteolytic activation of Notch receptors; Notch signaling pathway inhibition may follow, which may result in the induction of apoptosis in tumor cells that overexpress Notch. The integral membrane protein GS is a multi-subunit protease complex that cleaves single-pass transmembrane proteins, such as Notch receptors, at residues within their transmembrane domains. Overexpression of the Notch signaling pathway has been correlated with increased tumor cell growth and survival.

Nirogacestat has been used in trials studying the treatment of Breast Cancer, HIV Infection, Desmoid Tumors, Advanced Solid Tumors, and Aggressive Fibromatosis, among others.

Nirogacestat is an oral, selective, small molecule, gamma secretase inhibitor (GSI) in Phase 3 clinical development for patients with desmoid tumors. Gamma secretase is a protease complex that cleaves, or divides, multiple transmembrane protein complexes, including Notch, which, when dysregulated, can play a role in activating pathways that contribute to desmoid tumor growth.

Gamma secretase has also been shown to directly cleave BCMA, a therapeutic target that is highly expressed on multiple myeloma cells. By inhibiting gamma secretase with nirogacestat, membrane-bound BCMA can be preserved, thereby increasing target density while simultaneously reducing levels of soluble BCMA, which may serve as decoy receptors for BCMA-directed therapies. Together, these mechanisms combine to potentially enhance the activity of BCMA therapies and improve outcomes for multiple myeloma patients. SpringWorks is seeking to advance nirogacestat as a cornerstone of multiple myeloma combination therapy in collaboration with industry leaders who are advancing BCMA therapies.

Gamma secretase inhibition prevents the cleavage and shedding of BCMA from the surface of myeloma cells. In preclinical models, nirogacestat has been shown to increase the cell surface density of BCMA and reduce levels of soluble BCMA, thereby enhancing the activity of BCMA-targeted therapies, including CD3 bispecific antibodies.

Saqib Islam, Chief Executive Officer of SpringWorks Therapeutics Said: This collaboration is another important step in continuing to advance our goal of developing nirogacestat as a best-in-class BCMA potentiator, and we are pleased to work with Pfizer to study nirogacestat in combination with PF‐06863135, which has recently demonstrated promising monotherapy clinical data, We now have five collaborations with industry-leading BCMA developers to evaluate nirogacestat in combinations across modalities. We look forward to generating clinical data with our collaborators to further evaluate the ability of nirogacestat to improve outcomes for patients with multiple myeloma. 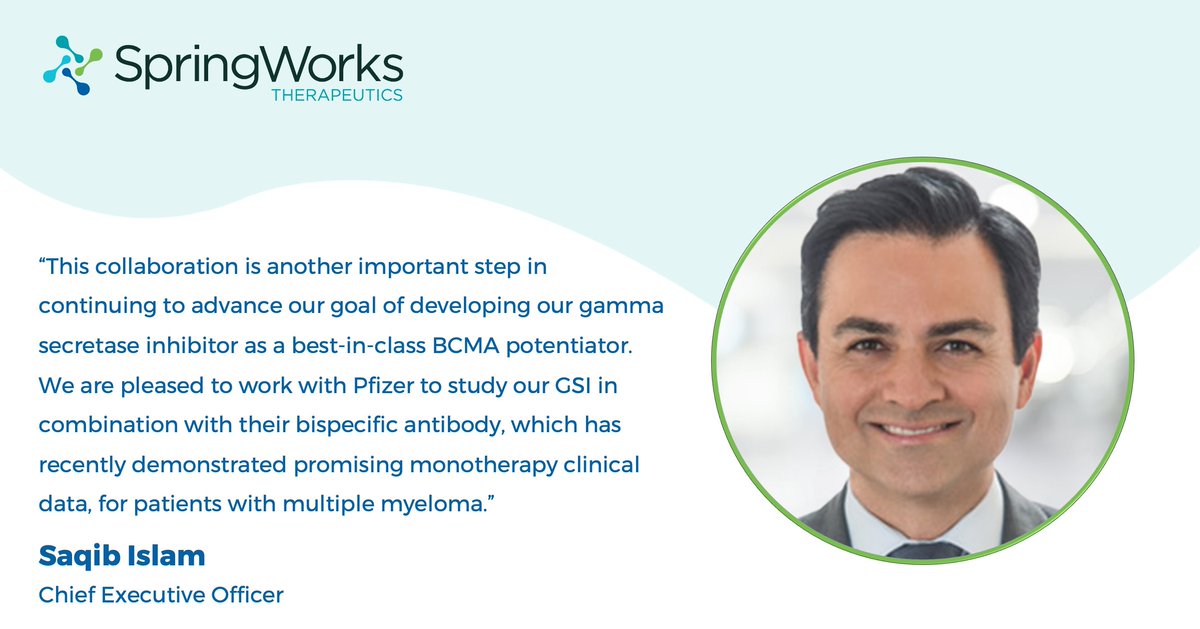 Under the terms of the agreement, Pfizer will sponsor and conduct the Phase 1b/2 study to evaluate the safety, tolerability and preliminary efficacy of the combination, and will assume all costs associated with the study, other than expenses related to the manufacturing of nirogacestat and certain expenses related to intellectual property rights. Pfizer and SpringWorks Therapeutics will also form a joint development committee to manage the clinical study, which is expected to commence in the first half of 2021.

Chris Boshoff, MD, PhD, Chief Development Officer for Pfizer Oncology at Pfizer Said: Entering into this clinical collaboration is a proud milestone in our strong relationship with SpringWorks,We believe that studying nirogacestat in combination with PF-06863135 could hold significant therapeutic promise for patients with relapsed or refractory multiple myeloma, and we look forward to working together to advance this important area of research.

Nirogacestat is an investigational, oral, selective, small molecule gamma secretase inhibitor in Phase 3 clinical development for desmoid tumors, which are rare and often debilitating and disfiguring soft-tissue tumors. Gamma secretase cleaves multiple transmembrane protein complexes, including Notch, which is believed to play a role in activating pathways that contribute to desmoid tumor growth.

In addition, gamma secretase has been shown to directly cleave membrane-bound BCMA, resulting in the release of the BCMA extracellular domain, or ECD, from the cell surface. By inhibiting gamma secretase, membrane-bound BCMA can be preserved, increasing target density while reducing levels of soluble BCMA ECD, which may serve as decoy receptors for BCMA-directed therapies. Nirogacestat’s ability to enhance the activity of BCMA-directed therapies has been observed in preclinical models of multiple myeloma. SpringWorks is evaluating nirogacestat as a BCMA potentiator and has five collaborations with industry-leading BCMA developers to evaluate nirogacestat in combinations across modalities, including with an antibody-drug conjugate, two CAR T cell therapies and two bispecific antibodies. In addition, SpringWorks and Fred Hutchinson Cancer Research Center have entered into a sponsored research agreement to further characterize the ability of nirogacestat to modulate BCMA and potentiate BCMA directed therapies using a variety of preclinical and patient-derived multiple myeloma models developed by researchers at Fred Hutch.

PF‐06863135 is an anti-B-cell maturation antigen (BCMA) CD3 bispecific antibody being investigated in a Phase 1 clinical study to treat relapsed or refractory multiple myeloma. This bispecific antibody can be administered subcutaneously and has been optimized for binding affinity to both BCMA and CD3, enabling more potent T-cell-mediated tumor cell toxicity.

The FDA has granted nirogacestat, an investigational gamma-secretase inhibitor, with a breakthrough therapy designation for the treatment of adult patients with progressive, unresectable, recurrent or refractory desmoid tumors or deep fibromatosis.

The FDA has granted nirogacestat (PF-03084014), an investigational gamma-secretase inhibitor, with a breakthrough therapy designation for the treatment of adult patients with progressive, unresectable, recurrent or refractory desmoid tumors or deep fibromatosis.1

“We are committed to pursuing the rapid development of nirogacestat given the important need for new therapies for patients with desmoid tumors and are pleased to receive this breakthrough therapy designation,” Saqib Islam, CEO of SpringWorks, the company developing the small molecule inhibitor, said in a statement. “We are currently enrolling adult patients in our phase III DeFi trial and will continue to work closely with the FDA with the goal of bringing nirogacestat to patients as quickly as possible.”

The open-label, single-center phase II trial of nirogacestat enrolled 17 patients with desmoid tumors who were not eligible for surgical resection or definitive radiation therapy and who had experienced disease progression after at least 1 prior treatment regimen. Patients received 150 mg twice per day of continuous, oral nirogacestat in 21-day cycles.2

The median age of patients was 34 years (range, 19-69), 82% of the patients were female, and 53% of patients had aCTNNB1T41A somatic missense mutation. The median number of prior therapies was 4 (range, 1-9), which included cytotoxic chemotherapy in 71% and a tyrosine kinase inhibitor in 59%.

Sixteen patients were evaluable for response. After a median follow-up of more than 25 months, 5 patients (29%) achieved a partial response and 11 (65%) had stable disease, for a disease control rate of 100%. Ten patients (59%) remained on treatment with nirogacestat for more than 2 years.

Grade 1/2 adverse events were observed in all patients, with diarrhea (76%) and skin disorders (71%) being the most common toxicities. The only treatment-related grade 3 event was reversible hypophosphatemia, which was reported in 8 patients (47%) and was considered to be a class effect of gamma-secretase inhibitors. Four patients met the criteria for dose reduction.

Findings from the phase I study also showed a disease control rate of 100% with nirogacestat. However, the median progression-free survival was not reached in either study due to a lack of patients progressing on treatment. Only 1 patient discontinued treatment due to an adverse event between the 2 studies.1 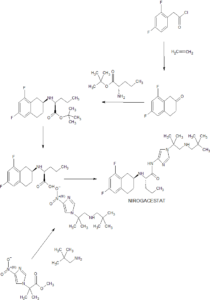 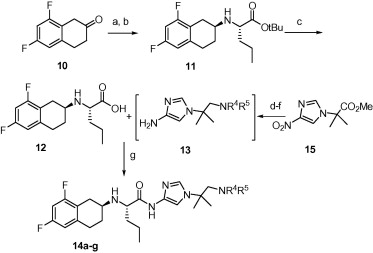 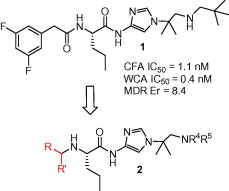 Novel, stable crystalline polymorphic (A to N) and amorphous forms of nirogacestat hydrobromide , useful for treating desmoid tumors such as multiple myeloma, a cancer having a mutation in a Notch pathway gene, adenoid cystic carcinoma and T-cell acute lymphoblastic leukemia.

[0004] In addition, the isolation and commercial -scale preparation of a solid state form of hydrobromide salts of Compound 1 and corresponding pharmaceutical formulations having acceptable solid state properties (including chemical stability, thermal stability, solubility, hygroscopicity, and/or particle size), compound manufacturability (including yield, impurity rejection during crystallization, filtration properties, drying properties, and milling properties), and formulation feasibility (including stability with respect to pressure or compression forces during tableting) present a number of challenges.

[0005] Accordingly, there is a current need for one or more solid state forms of hydrobromide salts of Compound 1 that have an acceptable balance of these properties and can be used in the preparation of pharmaceutically acceptable solid dosage forms.

[0148] In one embodiment, crystalline Form A is anhydrous.

hold protection in the EU states until March 2025, and expire in the US in February 2026 with US154 extension.

WO2020208572 , co-assigned to GSK and SpringWorks, claiming a combination of nirogacestat with anti-BCMA antibody (eg belantamab mafodotin ), for treating cancer.

US10590087 , for a prior filing from Pfizer, claiming crystalline forms of nirogacestat hydrobromide.